Cruising along the edge of the spring-fed lake in Wawa, Ontario, surrounded by snowy Precambrian hills, it is easy to see why postwar premier Leslie Frost believed the town was destined to become the Banff of the North. The 700-kilometre stretch of Trans-Canada Highway along Lake Superior’s rugged northeastern shore had just been completed, effectively putting Wawa (“land of the big goose” in Ojibwa) on the map. Thanks in part to a booming iron ore mine, a railroad, and a deepwater port, as well as endless timber resources, the population swelled to 5,400—more in the summer, when the tourists set up camp. Of course, Frost’s prediction never materialized. The warm glow of a January sunset reflects off the dirty windows of Broadway Avenue’s abandoned storefronts, but it cannot hide the harsh reality of life in northern Ontario.

The great recession hit here a decade earlier than in the rest of North America. Algoma Steel closed its iron mine, the community’s primary employer, in 1998. The last of the lumber mills was shuttered about ten years later. Meanwhile, tourism waned as fuel prices soared and the US dollar weakened. “It was like every time you opened the door, something new hit you in the face,” says Howard Whent, who served two terms as a municipal councillor and one as mayor between 2000 and 2010.

Current mayor Linda Nowicki inherited the anemic economy and a population that has dwindled to 2,975. As the tax base shrinks, she faces mounting infrastructure maintenance costs: the provincial government has downloaded various responsibilities, most recently for the local water treatment plant, and torrential rains last fall damaged numerous roads and bridges. Even the giant Wawa Goose that marks the highway turnoff is rusting away, with the replacement cost pegged at $500,000. “Right now, we’re in survival mode,” Nowicki says spiritedly. “We’re still functioning, but this year it will be a real crunch when it comes to doing our budgets.”

A scary message for our descendants 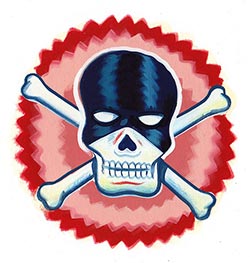 Ten thousand years in the future, in what was once New Mexico, a group of nomads may happen upon peculiar slopes in the land, earthen berms that direct the travellers to a central site. There, inside a concrete-walled grid, jagged spikes burst from the ground at chaotic angles. On the walls are images of Edvard Munch’s screaming man. The message: stay away! This is the nightmarish vision a group of experts conjured up to deter future humans from excavating nuclear waste sites. Over a decade ago, academics from various disciplines gathered at a conference in Albuquerque to brainstorm a warning that could transcend language, since not even linguists can predict how people will communicate that far into the future. Designers may be advised, though, to consider the value of banality. Curiosity killed the cat, after all.

All across the North, towns like Wawa are in bad shape, banking their hopes on new mineral discoveries and rebounds in the forest sector. But Nowicki’s council has set Wawa on a different course. It all started in 2008, when local resident Michael Chauvin, a retired dentist and science enthusiast, spotted an ad in a Toronto newspaper. It was posted by the Nuclear Waste Management Organization, an arm’s-length agency formed by the federal government in 2002 to deal with the thousands upon thousands of tons of spent nuclear fuel collecting in cooling ponds and warehouses around Canada’s most populous regions. The organization resolved to bury the waste in a “deep geological repository” and was seeking a remote host community. Chauvin alerted the Wawa Economic Development Corp., while his wife contacted Nowicki, then a member of the town council.

Eleven communities in northern Ontario, including Wawa, the hardscrabble railway town of Hornepayne, and the Atomic City of Elliot Lake, have entered the NWMO sequence of public information sessions, initial screenings, and geotechnical studies that will hopefully result in an agreement with an “informed and willing” host sometime in the next decade. Environmental reviews and construction would follow, with a target completion date of 2035. Roughly 4.6 million bundles of radioactive waste sealed in four-metre-long copper and steel cylinders would then be transported north over another thirty years to be entombed in perpetuity half a kilometre underground. Including post-burial monitoring, the NWMO estimates the process will take over 160 years and cost up to $24 billion.

The risk, of course, is that the containment will somehow fail, releasing radioactive materials into the landscape and poisoning humans and wildlife, not only in the vicinity but throughout the Great Lakes watershed. Anti-nuke organizations point out that since some of the radioactive elements have a half-life that exceeds the lifespan of the containers, this apocalyptic chain of events could even be inevitable. A previous proposal failed a 1998 Canadian environmental assessment due to lack of public support, and a large-scale underground repository has never been tried anywhere else in the world.

Ann Hicks and Marie David, sisters who live in adjacent houses across the road from Wawa Lake, remember playing in mining waste as children and were shocked to find out that the community would compete to host the NWMO facility. “They think it’s only rocks and trees up here,” growls David, eighty-three, as the younger Hicks nods sternly. Within months, they had collected over 800 signatures on their petition opposing the project.

They presented it to council in the fall of that year but say they were quickly brushed aside. According to Nowicki, it was accepted “for information purposes” and sent to the NWMO’s community advisory committee, but she stresses the importance of taking part in the competition. “The more we know, the better we can control our future,” she says. “Besides, there are benefits. They’re funding our strategic planning process, and they’ve hired a local employee and purchased office space.”

Chauvin, whose wife sits on the community advisory committee, sees participation as a moral imperative. “People are far too eager to use [nuclear] energy and far too ignorant of the consequences of their actions,” he says, over a cup of tea in his split-level on Lake Superior. He envisions Wawa transitioning from a boom-and-bust town to a global centre of nuclear research. “This is a learning process,” he notes. “I hope that we are adaptive enough to pursue and consider alternatives to nuclear energy.”

Ex-mayor Whent—who says he has spent hundreds of hours studying the science of spent fuel and the interplay of policies surrounding its burial—is less optimistic. The sheer scale of the repository means that it would likely extend beyond municipal boundaries, in which case locals’ various hopes and fears won’t much matter. “My greatest concern is the impact on the community,” he says. “We could end up with a situation where some people totally oppose it and others believe it is the economic solution.” In this small town, hundreds of kilometres from the nuclear reactors of Pickering, Darlington, and the Bruce Peninsula, fission has already begun.

Conor Mihell won a gold National Magazine Award in 2012 for his Explore feature “Into the Light.”