Bring on the Flood | The Walrus
Skip to content 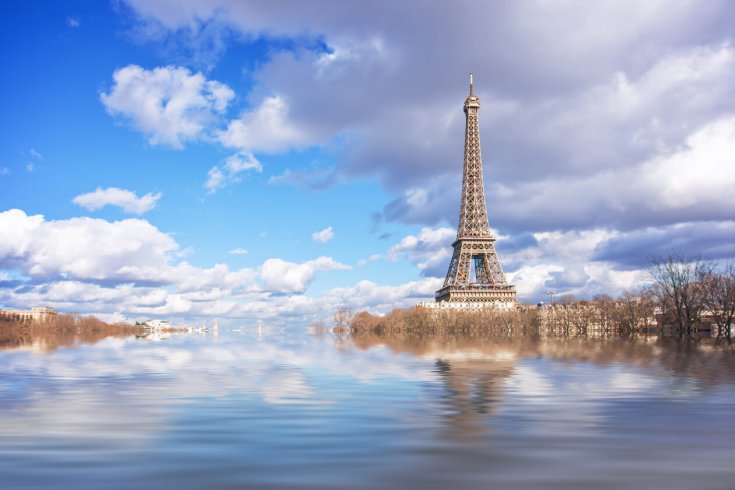 The dystopian genre of books, TV, and film seems like an odd place to look for sanctuary. Following a year in which there seemed to be no upper threshold for chaos—ascendant nativists, refugee crises, political vitriol, and ever-grimmer ecological forecasts all played their part—the dystopian tableau of today feels more topical than ever. This year, books like Omar El Akkad’s American War, Meg Howrey’s The Wanderers, and Cory Doctorow’s Walkaway speculate on a future that seems at once gravely imperiled and yet an appealing alternative to our embattled present. Meanwhile, Margaret Atwood’s dystopian classic, The Handmaid’s Tale, is being adapted for television by Hulu, to be released in April.

Doctorow’s novel, in particular, seems well positioned to capture, if not quite the zeitgeist, then a certain phantom mood that’s beginning to pervade the West. His novel’s main characters, Hubert and Natalie, living in a society fractured by income inequality, climate catastrophe, and chronic unemployment, decide to ditch civilization and huff it on the margins, dreaming of a different kind of world not choked by capitalism and rigid class hierarchy. After a year in which the United States and a handful of European nations seemed to be splintering at their cores, with vicious political rhetoric and ideologies mired in zero-sum death matches on social media, cable news, and partisan websites, Walkaway seems well-timed to capitalize on our desire for deliverance, or even permanent escape. Doctorow’s work is poised to be not only a highly resonant novel in 2017, but a harbinger for more novels that explore a new kind of dystopia, one that executes a subtle reversal in historical interpretations of the genre.

In the early and middle part of the twentieth century, the idea of a dystopia—by that point generally understood as an antonym for utopia and the antithesis of its peaceful arcadia—was being taken up by British and American writers. Novels by George Orwell, Aldous Huxley, Anthony Burgess, and even Jack London depicted totalitarian societies founded on an ethos of desensitized uniformity. In Brave New World, the World State genetically engineers rigid caste systems, conditions the population to accept their lot in life through brainwashing, and abolishes any serious art, scientific experimentation, or critical thinking. 1984 covers similar terrain, imagining an omniscient surveillance state, led by the ubiquitous party leader Big Brother, that rules though various draconian ministries that repress thought and speech, reshape history, and employ torture to maintain their culture of mass oppression.

This new wave of dystopian works offer clandestine opportunities to abscond from a world beset with a multitude of overbearing crises.

These mid-century novels were responding to global anxieties about fascism, communism, authoritarian parties, and in the case of Burgess’s A Clockwork Orange, the way government imposes conformity as a scourge for radical free will. These were all dark, disenfranchising futures, but the genre’s ties to the term from which it originally sprang remained hidden away, deep inside. The conceit in many of these novels was that the dystopias came about because powerful agents believed that, by enacting panopticon-like states and maintaining fastidious control over their citizens, they could create utopias. The difference between one and the other was, in essence, theory versus practice.

Later, in the 1980s and ’90s, Hollywood began drawing on the idea of a civilization gone astray, using the format to invent bright, phantasmagoric visions of fallen worlds replete with both technological advancements and primitive barbarisms. Terry Gilliam’s 1985 gonzo masterpiece, Brazil, satirizes a dismal, saggy future of humdrum technology, mind-numbing Kafka-esque bureaucracies, and the hideous upshot of a garish aristocracy with infinite access to plastic surgery. The Mad Max films swung the pendulum the other way, envisioning a bone-dry wasteland in which society has devolved into anarchy and factional warfare, a steampunk Darwinism of roving gangs, bandits, and bondage-clad bikers. And, of course, there’s Blade Runner, the rain-soaked noir acid dream by which all other dystopian films are measured.

The idea of a society in steep decline was clearly a boon for Hollywood, but it handled the genre differently than its literary predecessors. Whereas mid-century novelists seemed to be projecting their fears of fascism and tentacular governments, dystopian cinema was preoccupied with the way technology might outpace its human engineers, leading to a shambolic, misshapen world of both widespread desolation and fragments of tech-wizardry. While the film genre continued to evolve, producing movies like The Matrix and Gattaca, each extrapolating their own specific social critiques into through-a-glass-darkly speculative futures, at some point in the twenty-first century, the genre diffused—breaking through the confines of literature and film to become a more pervasive aesthetic force in society.

A quick glance at the dystopian works of this decade reveals a landscape far more sprawling than in previous eras. There’s the YA dystopian novel craze, including franchises like The Hunger Games, The Maze Runner, and Divergent, that have all been adapted into movie franchises. Meanwhile, literary fiction seems to have in some cases embraced post-apocalyptic plots and settings, including recent works like Station Eleven, California, Happiness Ltd., and The Book of Strange New Things. In film and television, Mad Max: Fury Road won more Oscars than any other film in 2015, and The Walking Dead continued in its seventh season to be one of the highest-rated shows.

The sheer capaciousness of these works suggests that the genre has shifted again, this time in a much more dramatic way. No longer sinister projections of our worst collective fears, or vivid mashups of lustrous technology and scabrous human frailty, the recent wave of dystopian works, and the slate of novels coming this year, suggest a kind of subversive wish-fulfillment: they offer clandestine opportunities to abscond from a world beset with a multitude of overbearing crises, from overpopulation and divisive politics to climate change and the toxic byproducts of globalization, to a post-apocalyptic wasteland that is alluringly empty. It is exactly this premise that Doctorow’s Walkaway hinges on, and it’s conceivable that more writers and novelists will start zeroing in on its dissonant attraction.

Further evidence of this incipient transformation in the psychology of dystopias can be seen in how the aesthetic of these worlds has shifted. Instead of focusing on fascist governments that demand obedience and submission, as the twentieth century literary strain of the genre did, many of the contemporary works imagine societies largely destabilized, with governments overturned or derelict, mass swaths of the human population wiped off the map, and characters thrown back into a kind of primeval chaos. The dystopian novels and visual media of the past few years often take place after a devastating virus or epidemic drastically reduces the population, suggesting something like a modern stand-in for the Genesis flood. Whether there is a moral undercurrent to these stories, as there was in the flood myths of the past, is hard to say, but the upcoming American War and Walkaway both betray a sense of inevitability, and a desire to wipe the slate clean.

One of the most popular television shows of the past half-decade provides an illuminating example of the dystopia’s subversive appeal. The Walking Dead takes place in the aftermath of a zombie apocalypse. The majority of the human population has been either killed or turned into “walkers.” The America the show’s survivors inhabit is rubble-filled badlands, a New World in reverse. From the very first episode, all that matters for Rick Grimes and the rest of The Walking Dead protagonists is survival. In this way, it serves as an escapist antidote to the bewildering complexity of the twenty-first century: it’s the human condition pared down to its essentials, life or death, fight or flight. It’s nuclear simplification, and these days, highbrow, lowbrow, and middlebrow art all draw on that desolate allure.

In some cases, the appeal of these blasted futures goes beyond just an abrupt reduction in human civilization’s complexity. The premise on which these narratives rest is that, whatever end-times possibility was hanging in the balance at some point in human history, it’s already happened. A scary virus breached multiple continents and dashed out most of the human race. Refineries, lakes, and rivers dried up, and the fight for oil and water sunk humanity into feral lawlessness. Rival superpowers finally waged nuclear war. Most of these dystopian scenarios are, after all, post-apocalyptic: the bad thing happened, the tension broke, and now so much less is at stake. The anxiety and ambivalence we feel toward late-stage capitalism, income inequality, political corruption, and environmental degradation—acute psychological pandemics in the here and now—are utterly dissolved. In a strange, wicked way, the aftermath feels fine.

The dystopian genre’s multimedia craze reveals how we long to blow the whole thing up, to start fresh; and if not that, then at least to gaze upon the spectacle of a fallen world, if only from behind the glass of fantasy. The fleet of 2017 dystopian novels, especially Walkaway, revels in this opportunity for creative destruction. In Doctorow’s novel, it’s no accident that out of the dystopian rubble blooms a new dream of utopia. Once again, the meanings of dystopia and utopia seem to have collapsed. Beauty is in the eye of the beholder, and today our utopia is a dystopia.

Mike Mariani (@mikesmariani) has written for The Atlantic, Pacific Standard, and Newsweek.