Beauty, Sex, and Love After Sixty | The Walrus
Skip to content 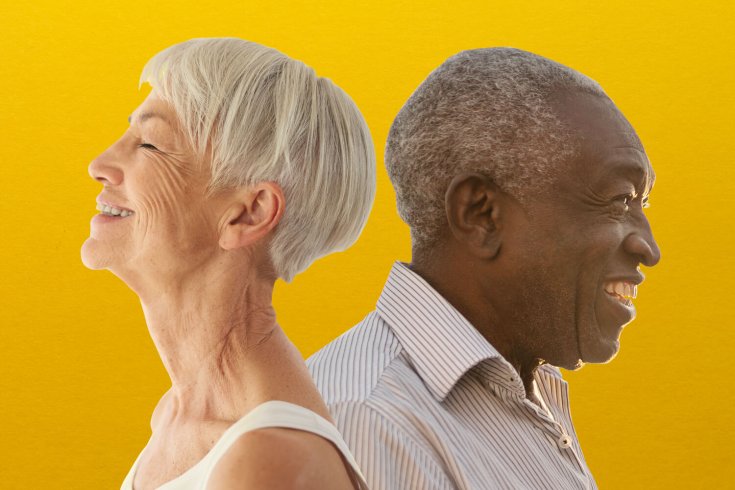 I fear I’m not quite the raven-haired “hottie” I once was. Oh, my hair is still raven coloured, sure, but now when I look in the mirror, I sometimes see the ghost of Alan Rickman looking back at me. Not from Truly, Madly, Deeply. From the Harry Potter films. He really rocked that aging, goth look. But, just like the late Alan Rickman, without my L’Oréal hair colour, I’m a silver fox too. Which is only natural, seeing as I’m north of sixty. But that doesn’t mean I don’t still feel pretty hot sometimes.

Few of us talk about it openly, much less flaunt it, but sexual desire beyond the sixth decade is a fact of life. It’s in this spirit that prominent French psychologist Marie de Hennezel approaches the topic of sex among seniors. There’s no age limit to enjoying love, because “the heart does not age,” and the same goes for lovemaking. In her 2017 book A Frenchwoman’s Guide to Sex after Sixty, she argues that, if we adapt sexual activity and adjust our expectations to better suit our aging bodies, we can look forward to rewarding sex for the rest of our mortal lives.

This might not sound radical, but it still deserves attention. In Western culture, the depiction of senior sexuality has traditionally been abandoned to farce or burlesque comedy, mostly as cringe-inducing, inappropriate, or even aberrant behaviour. (Think Blanche, the vain and easily aroused middle-aged southern belle whom no one took seriously, in the 1980s sitcom The Golden Girls or the odious British skit comedian Benny Hill, who made a career of mostly playing a so-called dirty old man running after young women.) It’s almost as though, once you are old enough to be a grandparent, you are expected to pass the baton of sexuality to the younger, more fertile generation. It’s the natural, mature, even moral thing to do.

But times are changing. Maybe it’s the just that big bulging baby boomer cohort sashaying its way into old age and recalibrating everything in its path. Maybe it’s just the inevitable advance of the sexual revolution: birth control to LGBTQ rights and, now, senior sex. Take a look at the award-winning TV dramedy The Kominsky Method, starring Michael Douglas and Alan Arkin, or five-season hit Grace and Frankie, starring Jane Fonda and Lily Tomlin. These characters are all knocking on their eighties and still interested in sex and romance, much like younger folks. What’s new is that they aren’t caricatures of frustrated sexual desire; they are complex characters with a rich range of thoughts and sensitivities, of misgivings and hesitations, of humour, courage, and conviction. They long for love because, even in old age, they are fully human. That’s the point.

De Hennezel also respects that many people over the age of seventy are done with sex. Even with the most satisfying sexual history behind them, they’ve reached a point where they are simply more interested in their grandchildren or gardening or Netflix than any new dalliance. They don’t have the physical or emotional energy. Voluntary celibacy can be a perfectly valid lifestyle choice. What’s important is that seniors feel they have a choice and can exercise it.

De Hennezel writes that 12 percent of people over sixty years old say sex is a source of great pleasure. But she’s more interested in the 36 percent of seniors out there who say they would like to have great sex but lack the confidence to pursue it. They fear they are just too old. They’re wrong, she says, but senior sex is such a taboo subject that they don’t know where to turn for advice and support.

Sure, there are common aging issues that can make the more vigorous sexual workouts of youth a hassle or even a hazard. Who among us over-sixty lovers hasn’t found themselves wondering, “Is this position going to break my hip?” A long list of factors can throw cold water on Peggy Lee’s fever: bad knees, weak wrists, lower back pain, arthritis, osteoporosis, weight gain, heart conditions, and so on. But the good news is, whatever your ailment, there’s a position for that. The point is to experiment. You don’t have to feel like you’ve done fifty push-ups the morning after. And, as with all good sex, an agreed-upon “safe word” is always recommended. Like “ouch.”

hey long for love because, even in old age, they are fully human.

In every seniors’ residence, people flirt, develop crushes, have blooming romances, ignite their desires, and fall in love, and it feels just as sweet and exciting as it did when they were teens. But, while TV and film may be taking the lead in acknowledging this, wider society lags far behind. Not respecting the sexuality of older people is, to quote de Hennezel, “quite simply a form of abuse.” But much of society still squirms at over-sixty sex, often ridiculing it with adolescent humour: see jokes about predatory cougars or the aforementioned dirty old men. Buying into these viewpoints is how we suppress the senior sex drive.

Another hurdle, though, is that we internalize age shaming. We no longer feel physically desirable. It’s the price we’ve paid for participating in a culture that fetishizes the aesthetics of youth. It’s all fun and games until we begin to notice our own aging. Then, too often, we are appalled. We dread exposing our creped skin, crow’s feet, sagging bellies and breasts and butts to each other. The physical signs of aging can make us feel humiliated or embarrassed, like we’ve done something wrong. This is particularly true for aging women, of course, who often watch men their own age chase after younger generations. No wonder they are willing to pay a high price, quite literally, to fight the evidence of time. (Don’t hate me for mentioning this, Jane Fonda, but that’s not Mother Nature’s idea of an eighty-year-old face.)

De Hennezel seems to believe it’s time we saw our aging reflections in a new light. With genuine enthusiasm, she reminds her readers time and again of the real beauty found in the seasoned face and body. This isn’t some kind of social-conditioning program designed to convince us that loose jowls are just as attractive as high cheekbones and a pert chin. More like a reminder that attraction has always been a matter of sublime subjectivity. A good thing, too, otherwise everyone would be courting the same 10 percent of the population. Instead, society is filled with people who happily hold the solitary conviction that their particular guy or gal is really something special.

When we get to know someone, they often begin to change before our eyes, and how we see them is gradually affected by how we feel about them. Our memories and mutual experiences shape what we see and don’t see, what attracts us and what doesn’t attract us. As time goes on, beauty is increasingly a work of the imagination, more like an atmosphere than an actual place. Nowhere is that subjectivity more gloriously evident than in an old married couple who look at each other and love what they see.

At the same time, this new senior sexual revolution isn’t being driven by old married couples but their singleton friends. A markedly growing demographic in North America is the single senior; people are living longer, and the divorce rates among retired couples have doubled in the last few decades. For single people no longer preoccupied with work and raising families, it can also be the loneliest time of their lives. Enter online dating sites that target seniors. Internet dating among the aging is a blooming business. It’s not all about sex, of course. It’s also about companionship. But those who manage to find a place for sexuality in the third act of their lives are the undisputed lucky ones. There’s nothing like a rush of endorphins to improve your circulation.

De Hennezel suggests aging lovers consider backing away from what she calls “performance-based sex” because it places too high an expectation on the physical strength and endurance of the partners.  She thinks that means placing less emphasis on genitalia and sexual intercourse. This is partly in response to some common sexual challenges of aging, such as inadequate vaginal lubrication and erectile dysfunction. Sure, there are solutions for these problems. Even so, she advocates a form of eroticism inspired by eastern cultures, tantric and Taoist, that simply doesn’t get hung up on physical exertion. They’re all about “slower-paced, more sensual, tender and playful sex.” That might even include old-fashioned oral and masturbatory sex and erotic massage therapy. (Maybe with a little ’60s soul music playing in the background for effect.)

But different strokes for different folks. I confess I find the advice to shift away from coitus, well, premature. As a Canadian living in a colder climate, I’m happy to enjoy a little friction under the covers for as long as I can. I’m not saying that “slow sex,” “soft penetration,” or “making affection” won’t ever cut it with me. Absolutely, I’m looking forward to tantric sex someday, lying still, side by side for hours, simply touching each other’s bodies with fingertips. Though, right now, I fear the only thing that would be buzzing after an afternoon of tantric touching would be the to-do list on my kitchen counter. So maybe when I have more time on my hands. Like when I’m ninety.

When she's not oversharing in personal essays, Gail Gallant is a writer of television documentaries. She is also the author of two YA paranormal thrillers, Apparition (Doubleday Canada) and its sequel Absolution, and most recently, a memoir titled The Changeling (Doubleday Canada).