Back to the Future | The Walrus
Skip to content 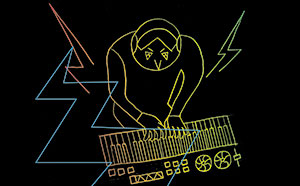 Like so many music careers, Jeremy Greenspan’s success seemed improbable at first. For starters, he grew up in Hamilton, Ontario—colloquially, “the Hammer”—a city better known for producing steel and a feisty football team than electronic music. But then Greenspan was a crafty sort. While living in Leamington Spa, England with his sister in the mid-’90s—she was part of a research group at Warwick University—the seventeen-year-old Greenspan finagled a job as an engineer in a studio in nearby Birmingham, where he would record bands for the higher purpose of making elevator music.

A few years later, while majoring in computers and comparative literature at Hamilton’s McMaster University, Greenspan met Johnny Dark, a friend of a friend with an equally fervent passion for recording. Using some old keyboards and the latest sequencing software, they co-wrote some dance tunes and posted their efforts to MP3.com, an early music-sharing site—with little public uptake. At this point, the only thing Greenspan and Dark seemed satisfied with was their moniker: Junior Boys.

When he was in England, Greenspan had been roommates with Steve Goodman, a DJ and label runner who would go on to record atmospheric music under the handle Kode9. The two never lost contact, and in 2001 Goodman posted a couple of Junior Boys tracks to his site Hyperdub. Frequented by music journalists looking to discover novel sounds, it would later evolve into an influential record label in the beat-driven genre known as dubstep.

The tunes Greenspan and Dark produced showed their love of cutting-edge dance music and the warm, resonant textures created by vintage synthesizers. Greenspan emerged, somewhat reluctantly, as the group’s singer; he didn’t have a powerful voice, but his breathy tone suited the nocturnal qualities of the music. In 2002, however, Dark decided to quit the project. When the head of the British label Kin Records approached Greenspan to deliver a full album, Greenspan called on another friend, Matt Didemus, to produce it. Greenspan had co-written five songs with Dark, and composed four on his own and one with Didemus, who was now officially the other member of Junior Boys.

By 2003, the anticipation for Junior Boys was palpable; in Canadian music circles, their name was intoned like the promise of a revelation. Under the banner of a proper record label, Kin, the duo posted a series of songs online and released them as twelve-inch singles. With their aching vocals, chiming keyboards, and surgically precise beats, tracks like “Birthday” and “Under the Sun” electrified music bloggers and stoked anticipation for a full-length record. Last Exit appeared in September 2004 to near universal acclaim. It also begat something of a renaissance in Canadian synth-pop.

The genre conjures all sorts of associations. Having dominated the pop charts in the ’80s, it left us with a number of lasting images: the sculptural coifs of A Flock of Seagulls; the android chic of Kraftwerk and Gary Numan; and the singular appearance of Duran Duran’s Nick Rhodes, standing behind his synthesizer, sneering into the camera like some new wave Nosferatu. Born in England in the late ’70s, synth-pop emerged not so much as a counterweight to punk but as a repudiation of rock in general. Spurning the machismo of guitar-based music, groups like Ultravox and Japan featured quasi-operatic voices, homoerotic imagery, and emotionally vulnerable lyrics. David Bowie was an obvious touchstone. But behind all the posturing, there was also some scintillating music. Acts like New Order, Depeche Mode, and Yazoo picked up on disco’s dance floor pulse while exploring the sensual possibilities of synthesized sound. Like the fizz of a freshly poured soda, synth-pop had a bracing effect. With its lush electronic timbres, mechanistic beats, and haughty vocals, the music was commanding and sexy; it could also be poignant and expressive, as evidenced by tracks like Bronski Beat’s “Smalltown Boy,” the keening lament of a gay kid shunned by his family.

While the Brits largely owned synth-pop from the late ’70s to the mid-’80s, Canadians made some indelible contributions during that time, including Trans-X’s single “Living on Video,” which sold two million copies and hit the top 10 in Europe; the Spoons album Arias and Symphonies; and Men Without Hats’ “The Safety Dance” and the damnably catchy “Pop Goes the World.” But with the ascendance in the ’90s of hip hop, grunge, and indie rock—genres that emphasized grit, authenticity, and a disarming sloppiness—synth-pop fell out of vogue, surfacing mainly in a cartoonlike form (hello, Aqua).

In the past decade, however, Canada has produced a number of artists who have collectively reclaimed synth-pop’s respectability. Junior Boys, along with acts like Crystal Castles, Diamond Rings, Handsome Furs, and Chromeo, have taken that original sound and pushed it in thrilling new directions.

Junior boys are students of musical history as well as master craftsmen. Their last album, Begone Dull Care (2009), took its name from a buoyant 1949 NFB short by animator Norman McLaren, who was also behind the 1971 composition “Synchromy,” an early example of synthesizer music. As it turns out, Canadians were innovating in this field long before the synthesizer became a one-syllable prefix—in fact, we had a hand in inventing the device. Back in 1948, Hugh Le Caine, a nuclear physicist with the National Research Council in Ottawa, completed work on the Electronic Sackbut, an early keyboard that enabled the user to modulate volume, pitch, and timbre. Then there was Bruce Haack, an Alberta musician and inventor who back in the ’60s made several appearances on The Tonight Show with Johnny Carson to demonstrate contraptions like the Dermatron, a heat- and touch-sensitive synthesizer he would affix to some hapless guest’s forehead to play. Haack also recorded several gently deranged albums, including The Electronic Record for Children in 1969 and, nearly a decade later, his magnum opus, Haackula.

Electronic artists, however, haven’t typically galvanized listeners in the same way as more traditional, guitar-centric acts have. In recent years, Canada has produced a number of world-class rock bands, from the artists who coalesced around Toronto’s Broken Social Scene (Feist, Stars, and Metric) to the groups that emerged from Montreal (Arcade Fire, the Stills, and Wolf Parade).

What distinguishes the synth-pop scene is that it’s not really a scene at all. There’s nothing that connects Junior Boys et al., other than imagination and the use of state-of-the-art technology to create a more visceral listening experience. For instance, Alexei Perry and Dan Boeckner, the married couple behind Montreal’s Handsome Furs, opt for a dark minimalism, with Perry’s simple keyboard lines and thudding drum machine offsetting Boeckner’s spiky guitar and rockabilly wailing. Meanwhile, Crystal Castles bring a punk-like belligerence to synth-pop, stuffing songs like “Alice Practice” and “Xxzxcuzx Me” with frenetic video game bleeps and gusts of pure sound. In 2009, Britain’s taste-making weekly New Music Express pegged Crystal Castles’ self-titled 2008 debut at number thirty-nine on its Top 100 Greatest Albums of the Decade, gushing that it was “absolutely overloaded with spine-tingling, pulse-quickening electro noises.”

The isolationism of these groups arises partly from the way the music is created. Broken Social Scene, for example, consists of a small army of musicians whose compositions are often born out of expansive, improvised jams. Producing computer-
based music like that of Junior Boys, on the other hand, requires a good deal of solitude; programming drum beats involves thousands of mouse clicks, and it isn’t really a group activity. Technological advances over the past two decades have also made it possible to compose and record pristine-sounding music and upload it to the Internet with little more than a laptop, which is why most synth-pop acts are either solo artists or symbiotic duos.

Rather than feed off the synergy of a local scene, most of these artists find inspiration abroad. What initially made Junior Boys so refreshing was that they sounded unlike anyone else in Canada; their music was outward looking, taking elements from specialized dance genres like German micro-house and British dubstep. Similar echoes can be heard on Swim, the most recent album by Caribou (a.k.a. Dan Snaith of Dundas, Ontario), a collection of spooky electro-hymns that was nominated for the 2010 Polaris Music Prize.

Informed by past masters like electro-funk legend Prince and soft rock smoothies Hall and Oates, Chromeo’s sound returns to the original synth-pop aesthetic: guttural bass lines, squelchy chords, and liberal use of the talk box, the voice-distorting device popularized by Peter Frampton and Roger Troutman. But what David “Dave 1” Macklovitch (vocals, guitar) and Patrick “P-Thugg” Gemayel (keyboards, talk box) bring to the party is a winking self-awareness, from their shameless sex drive (“If I tell you how to do my dance / Baby, then you’ll let me get in those pants”), to their musical in-jokes, like poking fun at synth-pop’s propensity for drum machine overkill.

For their part, Junior Boys continue to craft some of the most transcendent electronic music around. Released in June, It’s All True, their latest record, proves that Greenspan and Didemus remain committed to making headphone music of the highest order. The keyboard textures on songs like “ep” and “The Reservoir” are lush and unpredictable, the rhythms crisp and intricate, while “You’ll Improve Me” and “Second Chance” exemplify Junior Boys’ deft use of space; the gaps between notes and beats are sometimes so cavernous, you almost feel yourself slipping through the music. Above it all glides Greenspan’s inimitable voice, which registers somewhere in the middle of a whisper and a coo.

Emotionally, It’s All True dwells in the space between longing and regret, as Greenspan grapples with spurned love and misguided desires. “So patient, so kind / It’s never easy to tell,” he muses. “If you’re playing with my mind / You hide your itchy fingers well.” In “Second Chance,” he rebukes a shameless opportunist while still admitting his feelings for her: “When I move, when I run / When I try to shake it off, you’re still the one / Get lost inside a story of better men than me / Squinting in the mirror, because it’s better not to see.”

Like the very best synth-pop, the music of Junior Boys takes advantage of the latest sonic gadgetry without sacrificing spontaneity or emotional urgency. The sound is relentlessly, irresistibly modern—but the sentiments are as old as romance itself.