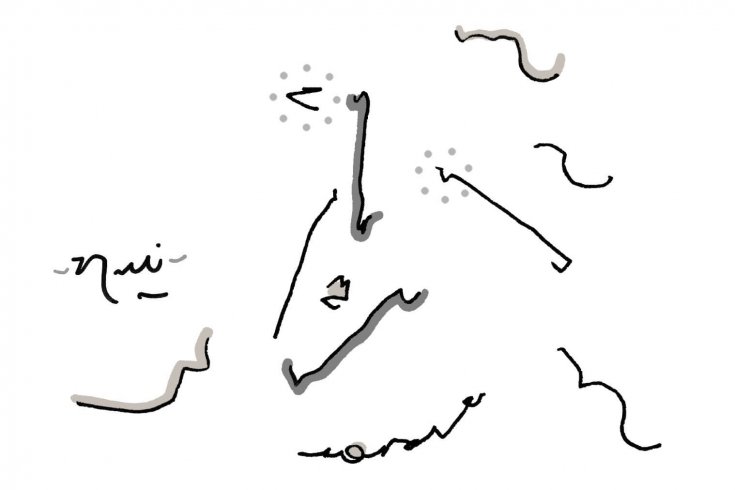 Aunt May ran over a kid in her electric chair.

We heard this screaming and ran outside. The neighbour’s kid was lying on the sidewalk, holding his stomach.

Aunt May was at the end of the street already.

Dad and I jumped in the car. Her Quickie can do 30 kph.

We cornered her by the recycling bins.

“That’s what you think,” said Aunt May.

She started backing up but Dad scooped her out of the chair.

She bit my dad and threatened to bite his dick off but he got her into the back seat.

I rode the chair home.

Dad got a third job. I joined Book Club to escape Aunt May. Even reading Dostoyevsky was an escape.

One night, Mom was at therapy and Dad was at work. I had to watch Aunt May.

“Hey,” she said from her bedroom.

I turned a page.

I set down The Brothers Karamazov.

Aunt May was sitting up in bed. She had a puzzle spread out on a tray. She had an Oh Henry! bar in one hand, still in the wrapper.

“Come here,” she said, not looking up from the puzzle.

I went just one step closer.

“Come here for a second.”

I went to the edge of the bed. It was a puzzle of the Berlin Wall.

Aunt May grabbed my hand.

She squeezed my hand and the Oh Henry! bar.

It was for the safety of the race.

She stabbed me with the Oh Henry! bar in the face.

I said fuck and walked away.

Something hit me in the back. I turned around.

It was another Oh Henry! bar.

Aunt May was reaching over and taking another bar out of the nightstand drawer.

I got out of there pretty quick.

I looked in the mirror. There was actually a cut from the Oh Henry! bar.

When Aunt May had an ordinary chair, she wasn’t as horrible. She was tigerish but law-abiding. She spent a lot of time sleeping. My parents thought having a Quickie would cheer her up and make things easier. It made things easier (for her) but the spark of electricity changed her into Frankenstein.

When she refused to eat with us anymore, taking May her food became my duty. It wasn’t the worst job but it was close.

I set down her supper tray one night. I was quiet but her one eye popped open.

She always knew the one thing to say, to kill you. She was a specialist.

I started walking away fast. Before I got out the door:

I slammed the door.

Something slammed against the door. Probably an Oh Henry! bar.

I picked up The Brothers Karamazov.

Aunt May had a husband, once. Big Red. He was actually a little guy with a red beard. Mom showed me a photo. When he keeled over, Aunt May finished washing the dishes before calling the ambulance. It was too late for him.

It was too late for us.

Things were getting to Mom. She was sobbing more than usual. She prayed when she knew people were listening.

Once when I passed her bedroom she said, “Please god take her home to heaven so I don’t have to do this anymore.”

It was sad. It’s sad, but I’ll be saying that about my mom one day.

The one night, I went with her to therapy. We were going to catch a movie after.

I paced up and down the hall.

I stared at the office door.

I opened the door a crack.

Women were sitting in a circle. I spotted my mom.

A fat woman was crying.

“This is the man who raised me and all I can think about is holding his head under the water.”

The woman beside her rubbed her thigh.

“I think of drowning Dad every day,” she said in a comforting voice.

“I want to stab my mother,” said someone else.

A woman in black said:

I closed the door.

I thought, Shit. These people are freaks.

I opened the door again. I sat against the wall.

I’d been thinking of killing Aunt May a lot, too.

“A character arc,” said my friend Sarah one night, after Book Club.

“My aunt,” I corrected her. Auntie made her sound cuter than she was.

“Your aunt is miserable now. But maybe that’ll change. Maybe she’ll warm up in the end. You’ll form a special bond, or something.”

I just looked at her. I shook my head.

“That’s the dumbest thing I’ve ever heard,” I said.

We all went in the ambulance. That’s the only time we left Aunt May alone.

It turned out Mom was just drunk, which was embarrassing. We were shocked because we’d never seen her drink. Dad hid the liquor in my closet.

It was only four hours but Aunt May had a fit. She screamed until Dad brought her a phone. I don’t know who she called but nothing happened. When I brought her her food she pushed it on the floor. I cleaned it up so my mom wouldn’t have to.

I couldn’t sleep that night. I tried a few different kinds of liquor and some wine.

I dreamed Aunt May was riding her Quickie in a ditch. We were following her in a police car. When she reached the top of a steep hill, she collided with another Quickie coming from the other direction and died.

When I set down her tray one night, Aunt May didn’t say anything. I got lucky.

I left the room.

I went back into the room.

I touched her and she was cold. I checked for a pulse, to be sure.

Aunt May was dead.

Dad sold the Quickie and the spark of electricity went back into our lives. He quit the one job. Mom quit drinking for the most part. I quit reading Dostoyevsky. We were all happier.

Aunt May’s room is the exercise room now. There’s a treadmill where her bed used to be.

I don’t miss Aunt May. I hardly ever think of her.

In real life, there are no character arcs.

I hated the lady.