At The Gastown Riot | The Walrus
Skip to content 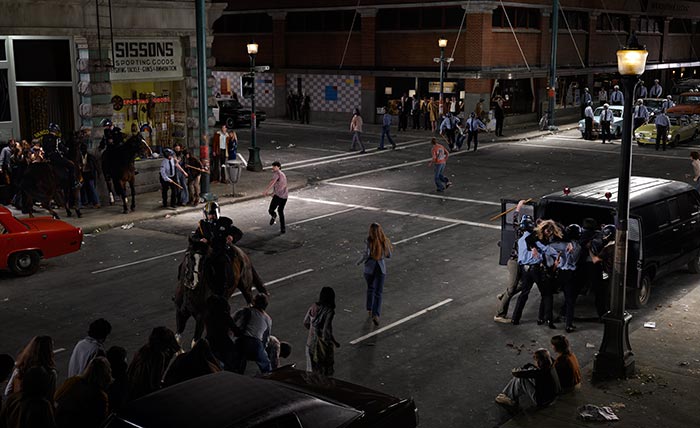 The woman runs down the Vancouver street, her orange hair swinging. On the sidewalks, against the parked cars and shop windows, in the ethereal beam of city street lights, police officers advance on her fellow rioters. Cops on horseback charge the shaggy protesters; as two officers drag a man in blue jeans toward a black paddy wagon, you can almost hear the scrape of his feet on the asphalt. The windows of the Woodward’s department store—several lives before its current incarnation as high-end condos—are dark. And on the periphery, middle-class onlookers survey the spectacle: the Gastown Riot.

Or, rather, the Gastown Riot as chronicled by Vancouver artist Stan Douglas in Abbott & Cordova, 7 August 1971, a massive digital photograph set to be installed this June at the multimillion-dollar Woodward’s building redevelopment, in the heart of the city’s Downtown Eastside. The photograph depicts what Douglas, who has documented the neighbourhood before, considers a crucial moment in the community’s history: “I’m showing a place where a group of people—hippies—thought they had entitlement to occupy this space, and to use it as they wanted. They were denied that by the city and the police.”

In the early ’70s, Gastown was undergoing a transformation. Hippies from Kitsilano drifted over the bridge, settling in a place once occupied by factories and single working men. To cement their position—and facing pressure from the police—the new residents staged a “smoke-in,” complete with free popcorn and a papier mâché joint at least a metre and a half long. Thousands of participants showed up. The cops arrived in riot gear. Violence erupted.

To recreate the scene, Douglas mined public archives, newspapers, and videotape. He interviewed merchants, residents, police, and protesters. Initially, he planned to shoot on location, but “it became so complicated and expensive, we thought, ‘We might as well just build the thing ourselves.’” So Douglas and his hundred-person crew constructed a set in the parking lot of the Pacific National Exhibition, laying down blacktop and weathering the building facades. Fixated on historical accuracy, the artist tracked down the window dresser of the corner sporting goods store, crafted riot sticks, and littered his streets with replicas of the day’s Vancouver Sun. To get the “right period faces,” he cast 100 actors, eventually using eighty. He blocked out the action with three-dimensional models, and wrote nine scenes for the cast to mime.

The shoot itself took three nights, two with the actors, and one with just the set. Douglas required so much illumination to get the proper, crisp focus that he used seven generators to power the lights, transforming the Vancouver night into day. Keeping his camera lens motionless throughout, he captured about fifty different views of the riot, later layering the digital elements into a coherent composition. In advance of the installation, he is printing the photograph on ten-millimetre-thick panels of glass, with the reverse image on the back. Technicians will fuse the layers, leaving the artist with what amounts to a massive piece of coloured windshield glass. Stretching eight by thirteen metres, it will form the dividing wall between a public plaza and an atrium linking the development’s four buildings.

This is Douglas’s first public artwork, and the developers volunteered the funding—between $1 million and $1.5 million, depending on whom you ask. So far, they have thrilled to the piece. “I was very surprised,” Douglas says. “I was actually waiting for someone to—I was kind of disappointed that nobody was upset about this project, about this idea. I thought I was being very subversive, and no one’s complaining,” he adds. “What the hell’s going on? ”

“It may be a bit controversial,” says a development company representative. “It’s certainly not a feel-good photo. It’s more of a turning point in history, which we’re happy with. I mean, we think it’s something to talk about, something to discuss, and that’s the idea behind art, right? ”

Douglas seems content to craft the work and leave the public and the critics to paw over the remains. “I make the images, and I try to direct the ideas as much as I possibly can,” he says. “The ultimate effects, the ultimate meaning, are something that happens when the work is in the public sphere and people start responding to it.”

At this point, the ultimate meaning of Woodward’s also remains unclear. A family-oriented department store, a reminder of a neighbourhood’s decline, a hot new address: Woodward’s has always been a cipher for the area. After it closed in 1993, the building changed hands for nearly a decade, as developers, the provincial government, and then the city vowed to renew it.

In 2002, activists erected a tent city on the sidewalk, staking a claim as the hippies had done decades before, and protesting Vancouver’s lack of affordable housing. The protest held together for three months, attracting 280 squatters at its height. Almost two years later, the government chose Henriquez Partners Architects and Westbank Projects/Peterson Investment Group to redevelop the property with a forty-storey condo tower, 200 affordable units, retail space, offices, and a home for Simon Fraser University’s School for the Contemporary Arts. “THIS IS YOUR NEIGHBOURHOOD,” the development’s website announces.

Developers often forget that a neighbourhood is a palimpsest, but Abbott & Cordova will preserve the site’s narrative, advancing Douglas’s perception of history as a past that overlaps the present. There was a protest here. And every morning, condo dwellers will pass it on their way to work, their reflections gliding over the image like present-day ghosts. 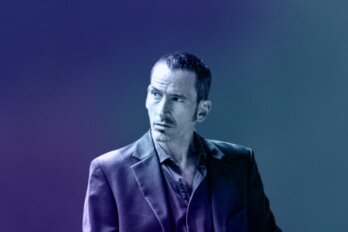