Ask an Oil Expert: What’s the Future of Fossil Fuel in Canada? | The Walrus
Skip to content 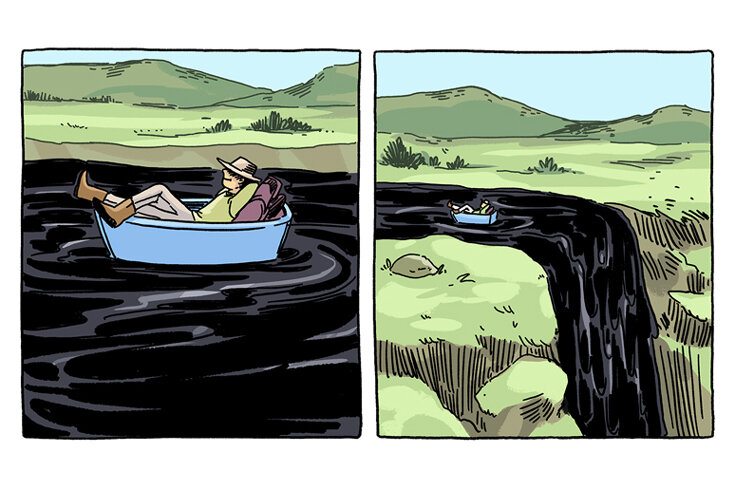 Oil is economically volatile and unstable.1 This isn’t the first downturn Canada’s oil-producing provinces have experienced—there have been a few since the 1980s.2 Major financial actors are choosing to move investments away from oil, and even some oil companies are moving away from investing in its exploration. And we know we have to ramp down production to avoid catastrophic climate change.

Prime minister Justin Trudeau and his cabinet say that we can have an economy that is in great part dependent on expanding fossil fuel extraction and that we can also meet our international climate responsibilities. But those two things are irreconcilable.3 This is why climate activists and researchers were so frustrated when the federal government purchased the Trans Mountain pipeline extension4 and when it fought hard to try to keep the Keystone XL pipeline alive.

Now, we’ve got our American neighbour investing trillions in a green transition, reentering the Paris agreement, and taking bold action on pipeline projects and drilling. Canada’s emissions keep growing at a faster rate than American emissions. Canadians don’t imagine ourselves that way. But, if politicians in Canada were waiting for a chance to boost their ambition to confront the climate crisis, this is the opportunity. Rather than pinning our hopes on another oil boom, the surer path—for both climate and economic reasons—is to enact a just transition. Instead, what I see happening, particularly in these oil provinces, is that political leaders are hoping this moment will just blow over—the price of oil will increase, we’ll get another boom, we can go back to normal. But there is no back to normal.

There’s a misperception that the Canadian government is attentive to the environment, that there’s active work being done on climate change here. I think Canadians would be alarmed to know that they were at the bottom of the list.5

Especially in Alberta, over a relatively recent period, there has been a concerted attempt to produce messages about the importance of fossil fuels to provincial identities and to the national economy. People in those regions often really believe their identity is linked to the production of fossil fuels. Shifting that culture will be difficult. Some change is starting to happen—generational shifts that recognize fossil fuels are neither synonymous with Alberta’s identity nor the only way to power an economy.

Previously, many people in Alberta would be able to point to someone in their family who worked in oil fields. Indeed, my father worked in the oil field. Now, I think it’s harder to make that direct connection, both because there are more city dwellers and because technology has developed so quickly that there are fewer bodies needed on a work site. There’s an interesting group called Iron & Earth, which is composed of former and current fossil fuel workers who believe their skills can instead be put to use developing renewable-energy technologies and installing solar panels. Within the industry, there is a growing sense of not wanting to be left behind.


1. US president Joe Biden cancelled Keystone XL, a planned expansion of a major pipeline system that would have substantially increased the quantity of oil sent from Alberta to refineries in Texas.

4. The government bought the pipeline in 2018, after then owner Kinder Morgan threatened to walk away.

5. One of these is the Climate Change Performance Index, which assesses emissions, energy use, and climate policy to rank countries—Canada came fourth from the bottom out of fifty-eight.

Imre Szeman is a professor of communication at the University of Waterloo. His most recent book is On Petrocultures.
Angela V. Carter

Angela V. Carter is an associate professor of political science at the University of Waterloo. Her new book, Fossilized, is out spring 2021.