Ask an Economics Expert: How Bad Are Lockdowns Really? | The Walrus
Skip to content 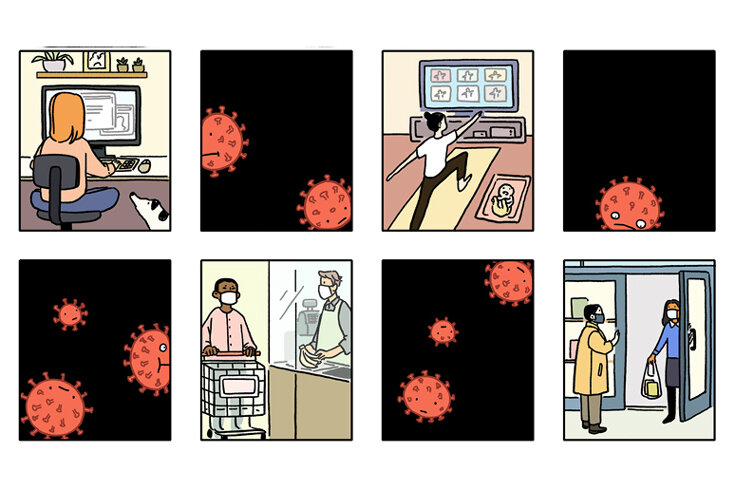 Over the course of the COVID-19 pandemic, we’ve seen the media presenting a stark trade-off between economic growth and public health measures to limit viral spread. But that idea isn’t coming from my fellow economists, who overwhelmingly support a strong public health response. If we look at the literature, there are a number of research papers consistently finding that the spread of the virus itself, rather than public health measures restricting movement and gathering, explains the vast majority of the decline in economic activity.

When the government takes strong measures to limit the spread of the virus, you typically have less contagion within a few weeks. When people lack confidence, when they are not sure that they can go to the store or go to a fitness class safely, economic activity decreases. If you’re not sure that the economy is going to recover rapidly, then you’re less likely to spend because you may lose your job. That’s how the virus really suppresses the economy. The literature is finding that economic activity in the US declined before public health interventions were implemented—that can be explained by virus spread itself.

How many Canadians rely on benefits?

As of October 2020, CERB has received over 27.57 million applications with total value of $80.64 billion distributed to Canadians across the country.

Since its inception in September 2020, the Canadian Recovery Benefit—CERBs successor—has distributed over $7.2 billion with over 7.2 million applicants.

People who applied for Employment Insurance in October alone, tripling February’s 446,000 applicants. According to Statistics Canada, this surpasses the amount of application received during the 2008/2009 recession.

There is some great research that has been published recently on the 1918 flu, so we can actually look at similar public health interventions in the past. In one study1, the researchers looked at the lockdown measures implemented in various US cities during that pandemic. They found that those measures limited the spread of the flu and, using contemporary economic data, also found that they led to an 11 percent increase in manufacturing employment and an 18 percent increase in manufacturing output over the following years. My expectation, based on the literature and on the fact that it is the virus itself that is driving the decline in economic activity, is that measures that limit the spread of the virus are going to boost our medium-run recovery2.

Another recent paper3 discusses how, by lifting public health interventions too early, you may think that you’ve succeeded and you see a little positive blip in GDP, but in reality, GDP growth in the medium run may be suppressed. People go to a few stores, they buy some things—then the virus spreads again, and that actually undermines economic growth.

Despite evidence showing the overall benefits of public health measures, there are different impacts on people and industries. One of the great public policy challenges here is compensating folks who take the hardest hits—lower-wage earners in general have had a much slower recovery versus higher-wage4 workers. CERB wasn’t perfect, but the government has done a good job of bridging income and adapting policy during the crisis. In terms of ensuring equitable treatment across companies, for example, the Manitoba government has fined Costco for selling nonessential items while other businesses that sold nonessential items were shuttered.

Even after mass vaccination, we could certainly be in a difficult economic position. But it’s possible that the vaccine rolling out will boost confidence enough on its own to have us off to the races in terms of economic growth.

1. From researchers at the Federal Reserve and MIT (currently a preprint paper, which has not been peer reviewed).

2. The provinces in the Atlantic bubble were under strict shutdowns and are expected to recover more quickly than other provinces.

3. From researchers at the National Bureau of Economic Research (currently a working paper, which has not been peer reviewed)

4. The Canada Emergency Response Benefit allocated $500 per week to people who had lost work because of COVID-19 and who met other requirements.

Rob Gillezeau is an assistant professor of economics at the University of Victoria. He is a former chief economist in the office of the leader of the official opposition.