A Power Line to Nowhere | The Walrus
Skip to content 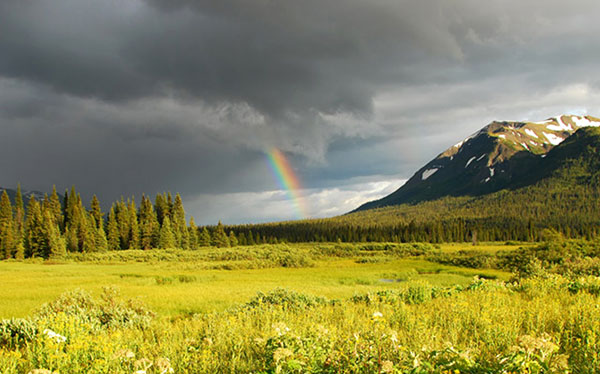 One year ago today, the Tahltan First Nation and its many supporters throughout northwest British Columbia rejoiced. Shell Canada, in a deal brokered by the provincial government, had agreed to relinquish its tenure and scuttle its plans to explore for coal-bed methane gas in the Sacred Headwaters, the birthplace of the three great salmon rivers, the Stikine, the Skeena, and the Nass. Shell’s decision was in part prompted by declining prices, but it largely came about because the company, as chairman Marvin Odum told me when we met in early 2012, had no interest in going where it was not wanted, and simply had not realized how important this land was to all First Nations of the Pacific Northwest.

This remarkable corporate gesture, so deserving of praise, left many hopeful that the eight-year-long battle for the Sacred Headwaters was over. Christy Clark’s Liberal government extended a four-year moratorium on oil and gas exploration in the valley, and in an announcement celebrating the agreement, suggested that further restrictions on mining activity in the Sacred Headwaters could well be forthcoming, even as it pledged to enter a lengthy dialogue with the Tahltan, all with the goal of considering permanent protection for the land.

Hence the surprise and disappointment when but weeks later it came to light that even as Clark’s government burnished its green credentials in the run-up to this spring’s provincial election, it was seeking to speed through the environmental assessment process a proposal from Fortune Minerals Ltd. The small, London, Ontario–based company sought to establish a 4,000-hectare open pit coal mine that would level entire mountains at the very heart of the Sacred Headwaters, on land within Shell’s original holdings. How could the same government ask one of the world’s largest corporations to abandon plans to extract natural gas from an established tenure, only to allow a minor player (which is backed by Korean money) to enter the same valley and extract coal that, once consumed in Asia, would add each year 10.5 million tonnes of greenhouse gases to the atmosphere, or fully a sixth of British Columbia’s total annual output?

Asked to explain, Matt Gordon, communications director for BC’s Ministry of Energy and Mines, responded that the Shell agreement was all about oil and natural gas, and had nothing to do with other industrial initiatives.

A more plausible explanation for the sudden about face and abandonment of the Sacred Headwaters emerged from an August 2, 2013 press release announcing a tour of the region by BC Minister of Energy and Mines Bill Bennett. In addition to inspecting the construction of the 287-kilovolt Northwest Transmission Line, the minister intended to visit the key industrial projects which the extension of the provincial grid is intended to power. These include Imperial Metals’ Red Chris mine, an open pit copper and gold proposal on Todagin plateau (home to the world’s largest population of Stone’s sheep), AltaGas’s Forrest Kerr run-of-river power project on the lower Iskut River, and Fortune’s Arctos Anthracite coal claim in the Sacred Headwaters. All of these projects are slated for development on Tahltan traditional territory.

The summer press release quoted a 2008 report by the Mining Association of BC which found that the extension of the NTL would attract $15 billion in mining investment, create 10,000 indirect jobs, and generate $300 million in annual tax revenues.

Missing from the release, however, was any reference to events over the last five years: developments in the marketplace and on the ground have rendered meaningless economic forecasts that were exceedingly optimistic when they were first issued. The most severe global recession since the Great Depression impacted the entire mining industry. Since 2008, commodity prices have proven highly volatile, with gold soaring from about $1,000 an ounce up to more than $1,800, then tumbling down to about $1,300.

Meanwhile, capital expenditures, such as the cost of building mines, have doubled. Investor sentiment has gone south, even as risk profiles have soared, leaving the entire mining sector scrambling to raise capital. What’s more, the inflated figures cited by the ministry’s release likely incorporated the projected economic activity of two major projects that have since been cancelled or mothballed—Shell’s coal-bed methane play in the Sacred Headwaters, and Teck Cominco Ltd. and NovaGold Resources’ massive copper and gold project at Galore Creek, which imploded in late 2007.

While the ministry’s press release notes that the construction of the NTL is on schedule, ready for service in 2014, it fails to mention that construction costs have nearly doubled to nearly $750 million, a figure that many analysts believe will reach $1 billion. Nor has the provincial government publicized the fact that of the $400 million originally budgeted for the NTL, fully $130 million came from the federal Green Infrastructure Fund, money set aside by Ottawa to reduce our national dependence on fossil fuels. The NTL mega-project, it has been officially said, will allow 350 Tahltan men, women and children at the small community of Iskut to get off diesel-generated power and reduce their carbon footprint, albeit at a cost of roughly $37,000 per resident.

Recalling the long-ago failure of BC Rail’s Dease Lake extension—the so-called “railway to nowhere” that collapsed in 1977—many local people now refer to the proposed 292-kilometre extension of the NTL as the “power line to nowhere.” Its terminus at Bob Quinn Lake is today but a highway yard.

On the assumption that the government would not spend more than $700 million to enable Forrest Kerr, a privately held hydroelectric project, to sell power back to the grid, observers recognize that the primary beneficiary the public expenditure is actually Imperial Metals’ Red Chris mine, a project that could not possibly proceed without access to power.

British Columbia’s government speaks of expanding provincial infrastructure. Imperial heralds private investment as it builds its own dedicated line 115 kilometres south from Red Chris to Bob Quinn, all part of an agreement that obliges BC Hydro to buy back the line for $52 million at the end of construction. There is no talk of subsidies, but that is precisely what the NTL has begun to look like, a massive public subsidy without which Imperial’s mine would never open.

But the real challenge for the government is the possibility that even with its power needs met by public funds, Red Chris may yet fail financially. Despite an investment of some $366 million—money that has already allowed Vancouver-based Imperial to explore the property and initiate a frenzy of site preparation and construction—the company has yet to raise the necessary capital to complete the mine. The entire project has largely been kept afloat by the investments of a single stakeholder, N. Murray Edwards, co-owner of the Calgary Flames and major benefactor of the Banff Centre, who has staked, through his companies, $200 million to support Imperial.

In the first half of 2013, the burn rate at Red Chris was close to $20 million a month. By its own admission, Imperial had yet to obtain long-term financing for the estimated $500 million in total capital expenditures necessary to construct the project, and has stated “there can be no assurance that such financing will be available on terms acceptable to the company or at all.”

All of which puts the provincial government in a slightly awkward position. Should Red Chris go the way of Galore Creek—which dwarfed the new project both in scale and anticipated production, and shut down when projected costs soared from $2 billion to $5 billion—the government truly will have helped build a $750 million power line to nowhere.

On the other hand, should Red Chris proceed—and yet, be the region’s only major project to do so—the public might recognize the NTL as being a subsidy in support of a single open-pit mine that will industrialize what is arguably the richest wildlife sanctuary in British Columbia, and bury in toxic tailings one of the headwater lakes of the Stikine River, lifeline of the Tahltan people.

With so much political and financial capital at risk, the Liberal government is clearly in need of a backup plan, which at this point must be Fortune Minerals, the only other major project in play. Is this why the same government that urged Shell Canada to abandon its claim has since fast tracked Fortune’s Arctos Anthracite coal project?

Public policy deliberations upon which rest the fate of one of the most unique and beautiful places in Canada—a valley revered by First Nations as the point of origins of the three great salmon rivers of home—should not be driven by the needs of political authorities keen to save face in the wake of egregious economic miscalculations.

In mid-August, the Klabona Keepers, the same Tahltan elders who stood up to Shell for a decade, occupied a protest camp at the headwaters of the Stikine and presented Fortune Minerals with an eviction notice. They have the support of the Tahltan nation, which at its 2013 annual general meeting, with the full agreement of the duly elected leadership of the Tahltan Central Council, voted unanimously to protect the Sacred Headwaters and exclude from it all forms of industrial development.

This does not imply that the Tahltan Nation is opposed to economic growth. Quite to the contrary, no community is more welcoming of new possibilities upon which to build their nation and secure the future of their children. But they do reject being forced to choose between unemployment and poverty, and jobs and short-term prosperity, through boom-and-bust industrial projects that by design violate their ancestral lands and ultimately impoverish their communities. The Tahltan want to provide their children with the opportunities that are the birthright of every Canadian, but not at any cost.

“We didn’t fight Shell for ten years so a coal company could come along and build an open pit mine in the heart of the Sacred Headwaters,” revered Tahltan elder Mary Dennis said during the Keepers’ protest. “We’ve stopped bigger industrial projects before and we’ll do it again with help from our supporters and allies.”

Wade Davis holds the Leadership Chair in Cultures and Ecosystems at Risk at the University of British Columbia. His award-winning books include Into the Silence and The Wayfinders. His new book, Magdalena: River of Dreams, is published by Knopf Canada.