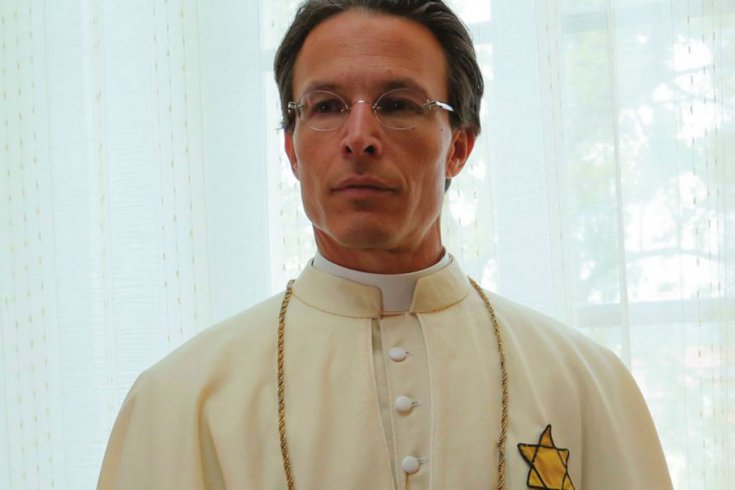 Back in 1999, British author John Cornwell published a controversial and widely publicized book called Hitler’s Pope: The Secret History of Pius XII. The title was misleading on two levels: first, in that it implied and depicted Pius as a faithful Nazi; second, in that it assumed the man’s story long had been kept a secret.

Six years later came a counterblast in the shape of The Myth of Hitler’s Pope: How Pope Pius XII Rescued Jews from the Nazis by David G. Dalin, who is not only Jewish but also a rabbi.

So there we had it. A liberal Catholic accusing a pope of Nazism; a Jewish academic and ordained cleric praising the wartime pontiff as a friend of anti-Nazism and the Jewish people. The twenty-first-century Pius wars had begun.

And now, another front has opened, with the making by Catholic director and writer Liana Marabini of a movie called Shades of Truth, which will be shown at this month’s Cannes Film Festival. The title does not appear to refer to the more famous and similarly named film about sado-masochism. However, it is somewhat painful to watch—a one-sided hagiography presenting a man who utters progressive aphorisms as he strides along Vatican hallways shaming his contemporaries as they fail to properly empathize with Europe’s poor Jews. It also makes the outlandish claim that Pius saved 800,000 Jewish lives, a boast that even his most aggressive academic supporters would never make.

In one scene, which naturally is used in marketing materials for the film, Pius is shown wearing a yellow star pinned to his papal cassock. It never happened in real life, of course; and even in Shades of Truth, the scene is confined to a dream sequence. So it’s misleading at best, if not noisily dishonest.

But imagine if the leader of world Catholicism really had worn such a symbol of degradation and genocide? Urban legend long has had it that the King of Denmark wore such a star as he rode the streets of Copenhagen in his carriage; it’s not true, but the point is that those who knew him always accepted the anecdote because it was authentic to his character and attitude toward his Jewish subjects. The King of Morocco actually did request yellow stars for himself and his family when told that Moroccan Jews would have to wear them. And this from an Arab Muslim monarch living under occupation. But with Pius, the story simply doesn’t fit. Even in dream.

The story of Eugenio Pacelli, elected to the papacy in March 1939 as Pius XII, is complex. Anyone searching for absolute purity of motive and some sort of anachronistic philo-semitism and embrace of modern pluralism will be disappointed. He was a man of his time and his faith: obsessively frightened of Communism and its campaign against the Church; obviously unaware of who would triumph in the Second World War. His official actions consistently reflected these fears and uncertainties.

Pius XII almost certainly had no personal animus against Jewish people, always rejected the eugenics and intolerance of National Socialism, and on a personal level did what he could to save the lives of Jews around him. Before he became Pope, Cardinal Pacelli drafted the papal encyclical condemning Nazi racism and had it read from every pulpit. As Pope, he had the Vatican use its assets to ransom Jews from the Nazis, ran an elaborate escape route, and hid Jewish families in the papal palace of Castel Gondolfo. In 1945, Rabbi Herzog of Jerusalem, for example, thanked Pius, “for his lifesaving efforts on behalf of the Jews during the occupation of Italy.” When the pontiff died in 1958, Golda Meir, then Israeli foreign minister, delivered a eulogy at the United Nations praising the man for his work on behalf of her people.

For almost a generation, in fact, it was considered a political absolute that the Church was a member of a coalition of victims during the Second World War, and Pius was mentioned alongside Churchill and Roosevelt as part of the team of morally correct wartime leaders. It was only in the 1960s that the conversation around this issue began to change, partly because of the work of a German playwright named Rolf Hochhuth, who alleged in his 1963 play The Deputy that the Vatican not only had ignored the suffering of the Jews but tacitly and sometimes explicitly had supported the Nazis. The truth, however, is more of a via media than a via dolorosa.

While the Pope did not issue an outright attack on the Nazis’ treatment of the Jews, his supporters argue that this was because the leaders of the Catholic Church in Holland had made just such a public statement condemning the Nazi deportation of the Jewish people. In response the Germans had arrested and murdered every Dutch Jewish convert to Catholicism they could find. (Tragically, those arrests and deportations were only a matter of time anyway.)

Pius was such a friend of the Jews, the argument continues, that when the Chief Rabbi of Rome, Israel Zolli, converted to Roman Catholicism after the war, he took Pius’s name, Eugenio, in his christening as a tribute to the Pope’s work on behalf of the Jews. That’s also true but doesn’t really change much. On a personal level, as noted above, Pius certainly did what he could to save lives; but on a public level—where multitudes could be saved—he did far less.

Pius was not “Hitler’s Pope,” and the Nazis always considered him a threat. His failure was that he never made that threat a reality by speaking out resolutely against the Holocaust, invariably terrified of what would happen to the world’s Catholics if he did and advised by some around him that the alternative to the Germans was the Soviets. It’s an understandable dilemma, but a defiant Pope could have influenced hundreds of millions of Catholics, many of them serving in armies allied to the Germans. The risk would have been enormous, but Christianity isn’t supposed to be about safety and complacency.

Thus there are indeed numerous shades of truth around Pope Pius. Unfortunately, this risible movie only deepens the polarization and so makes it more difficult for a reasonable analysis to take place. The late Sir Martin Gilbert, one of the finest historians of the Holocaust and the Second World War and a man I was fortunate enough to call a friend, once put it like this:

This was a pre-Vatican II Catholic Church in the middle of a war that, for the most part, was not between Germans and the west but Nazis and Stalinists. If, say, John Paul II had been Pope, the story may have been different. Throw in subsequent rifts between the Catholic right and left, and the regrettable politicization of the Shoah and truth is extremely difficult to find.

The entire political and religious landscape has changed today, and some of these old battles obscure contemporary truths. Pius didn’t act particularly badly for a man of his era but, I suppose, he did act particularly normally. For someone thought to be the direct successor to St. Peter, given the keys of the kingdom by Jesus Christ, that’s just not good enough, no matter how well that truth is shaded.