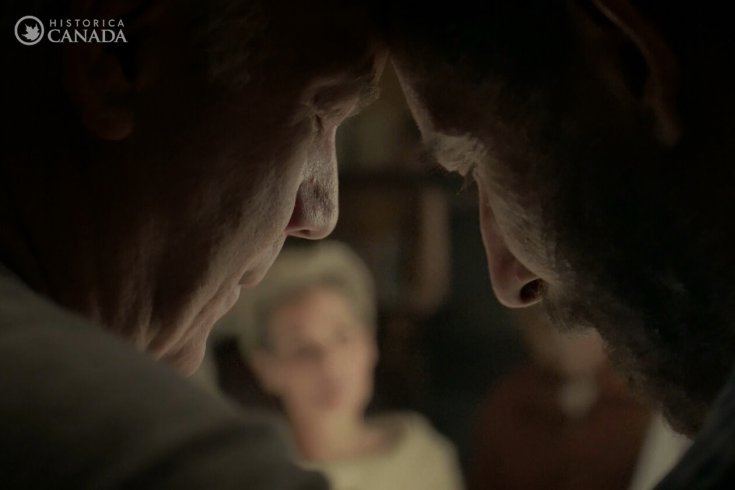 Sixty seconds is no time at all. Not nearly enough time, really, to tell a story of any great importance, and certainly not one that starts in a hotel bar, with two handsome young men sneaking glances at each other, kindling a relationship that will last over half a century against a backdrop of looming police officers. Yet sixty seconds can hint at a lifetime—rouse our anger, raise our hopes and then dash them—bringing tears to our eyes.

We who are of a certain age have fond memories of the earnest, sometimes stagey Heritage Minutes that aired on Canadian television and occasionally popped up among the trailers when we went out to the movies. Reminiscent of the National Film Board-produced Canada Vignettes of the 1970s and 1980s, which featured such tiny works of art as the Log Driver’s Waltz as well as historical portraits of Agnes Macphail and and the childhood tales of W. O. Mitchell’s character Melvin Arbuckle, the Heritage Minutes are a series of sixty-second Canadian short films, each depicting a significant person, event, or story in Canadian history. First released in 1991, they have made their way into the heart of Canadian culture. If the phrase “I can smell burnt toast!” rings a bell, it’s because of the once-ubiquitous Heritage Minute on Montreal neurosurgeon Wilder Penfield.

Now, after twenty-seven years of these historical videos, Historica Canada is releasing the first Heritage Minute to tell an LGBTQ2 story—that of gay-rights activist Jim Egan, who fought tirelessly from 1949 onward to increase understanding and tolerance of homosexuality, and who near the end of his life spent close to a decade pursuing spousal rights for himself and his partner, Jack Nesbit, all the way to the Supreme Court of Canada. (The Heritage Minute uses the term LGBTQ2 to acknowledge “two spirited,” a sexual or gender expression found in Indigenous communities in Canada that is distinct from western European concepts.)

A younger audience may watch Egan’s story and wonder how it relates to them, and why it matters. The sad fact is that, by the end of 2017, only twenty-six countries had legalized same-sex marriage. Social conservatism is on the rise. LGBTQ2 health care access, spousal benefits, adoption, immigration, sex work, homophobic and anti-trans violence and bullying, workplace discrimination, privacy protections continue to be in contention. Laws against sodomy, indecency and obscenity are still found even in countries where same-sex marriage is legal. Jim Egan’s story may be “part of our heritage”—but in some ways, sadly, it couldn’t be more timely.

For such a short dramatic piece, the Jim Egan Heritage Minute is complex and evocative. The bar where young Jim Egan begins his story is dimly lit in pinks and reds, suggesting warmth and comfort, tenderness and eroticism—and ultimately danger. “I never thought I’d know that feeling, to be in love,” the character says in voice-over as he smiles at his partner-to-be, then turns to see two police officers entering the bar. “Because for us, it was a crime.” Suddenly the screen fills with true-to-life covers of some of the tabloids from the period: QUEERS FLUSHED FROM “LOVE” NEST, one headline screams. LESBIAN VERMIN PLAGUES TORONTO!, shrieks another in a self-proclaimed “Exclusive Scoop.”

“Someone had to respond to the tabloids,” Egan continues in a sepia-tinged sequence, as we watch him type one of a series of groundbreaking columns under the initials “J. L. E.” “So I wrote letters challenging every misconception about homosexuality.” Jim looks from a newsprint page featuring his published work over to Jack, asleep on the couch, and we immediately sense both intimacy and neglect—the patient lover waiting to be awoken and brought to bed.

“Nine homes, seven dogs, forty-seven years together, and still not spouses under the law,” he states as we hurtle through a home-movie montage to find the two men now portrayed as much older, but still very much in love. Here, at the halfway mark, with the depth of the couple’s bond deftly established, the film enters its crucial movement. In a long, potent scene titled “1995,” Jim and Jack, looking hopeful but weary, wait by a cream-coloured Touch-Tone telephone surrounded by reporters and camera crews. The phone rings, and Jim answers. Jack looks up at him, loving and hopeful. After a moment, Jim looks over at Jack and shakes his head. Jack’s face falls and he closes his eyes. Jim’s hand clasps Jack’s, a would-be wedding ring prominent in the frame. “We lost our case,” Jim says in voiceover. Their foreheads touch and we feel the ache of the years that have passed, and the fears for a future of infirmity and decline. Then he adds: “But we made a difference.”

Applause rises and we see documentary footage of the real-life Jim Egan and Jack Nesbit in the back of a convertible, grand marshals in Toronto’s 1995 Pride Parade, waving to crowds of exuberant young people, bridging past struggles with present liberation and celebration. A familiar voice concludes the piece, one many will recognize as belonging to k.d. lang. “As a result of Jim Egan’s case,” she notes, “the Supreme Court ruled that sexual orientation is protected under the Charter of Rights—a landmark victory for the LGBTQ2 community.” The final image is of the two men’s hands, this time held upward together in triumph.

While the two men did not live long enough to see the legalization of same-sex marriage, they were able to witness in their final years a multitude of changes that brought the LGBTQ2 communities ever closer to equality under the Charter and under the law.

However, as we watch this Heritage Minute unfold, we are reminded that the battles for LGBTQ2 rights and recognitions have been long, and have been fought on many fronts. Everything that we’ve won has been attained in just the last few decades, and is subject to the agenda of a handful of people in power and changing public sentiment. The laws that have been passed to protect us are enforced by many who despise us and who have a history of brutalizing us. Charter rights can be limited more easily than they were inscribed. It is only through persistence and vigilance that we can maintain the freedoms for which we have fought.

The new Minute’s creators, production company Route Eleven and award-winning director Stephen Dunn (Closet Monster), previously collaborated on the vibrant, sensuous Heritage Minute on Lucy Maud Montgomery, which inventively juxtaposed her struggles with depression and sexism against her love of the P.E.I. landscape and desire to immortalize it in her prose. The team has brought the same flair for concise, poetic visual storytelling to this project.

If there is any criticism to be made, it is that Jim Egan’s journey is necessarily tightly compressed, and so some of the intense personal challenges that he and Nesbit faced in their relationship are brushed over. Their story has enough romance, intrigue, and public and private drama to make for a binge-worthy miniseries—and who knows? Maybe someday it will be.

I also hope that the next LGBTQ2 Heritage Minute will shine a light on some of the many women, trans and genderqueer people, Indigenous people, Black people, and people of colour who have faced persecution throughout our nation’s history—and even before. These are stories that have rarely been told, and we all would benefit from listening to them and recognizing that they, too, are a part of our heritage.

David Demchuk has been writing for performance, print and digital media for nearly forty years. His debut novel The Bone Mother has been nominated for the Giller Prize, the Amazon First Novel Award, the Shirley Jackson Award, and the Sunburst Award.