A Letter to Leonard Cohen | The Walrus
Skip to content 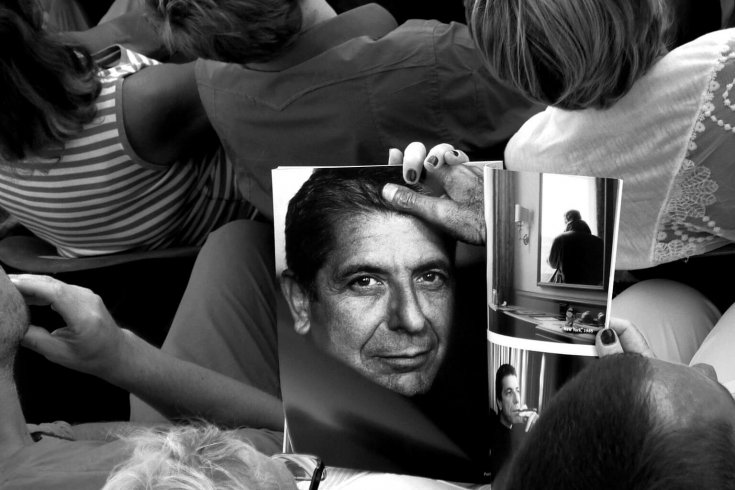 Soaking in the tub the other night, I thought about the scene in Ladies and Gentlemen . . . Mr. Leonard Cohen where you’re taking a bath and scrawl “caveat emptor” on the wall. I decided to write you a letter to explain how, as a girl, I fell in love with your song “Suzanne” and how this was the beginning of my life as a poet.

People must write you all the time. When you create a body of work like yours, people see themselves in it. When I try to figure out how a girl raised by a single mother in suburban Detroit ended up writing poems in Toronto, I see the groundwork being laid in your lyrics that my mother gave me for Christmas one year.

Less than a month before I turned twelve, my mother collected her favourite poems for me in a purple cardstock folder, the kind you buy at the drugstore. Other than a poorly received pair of pyjamas covered in teddy bears and hearts, this is the only Christmas present from her I still remember clearly. The folder was lost years ago, but I will always remember what was in there: works by William Blake, Don L. Lee, Lawrence Ferlinghetti, Yeats, Dylans both Bob and Thomas. I loved reading them out loud.

“Suzanne” was in there too. I read it so many times that I memorized it. I didn’t even know it was written to be sung—it has such a strong internal rhythm, like the anonymous Scottish ballad “Barbara Allen,” which my mother liked to recite with melodramatic flair:

O slooly, slooly rose she up,
To the place where he was lying,
And when she drew the curtain by,
“Young man, I think you’re dying.”

This is also technically a song, but one that, like “Suzanne,” carries the music in the words.

The only record my mother salvaged from her brief and disastrous marriage to her high school boyfriend and her subsequent brief and disastrous relationship with my father was the red Beatles compilation album of their hits from 1962 to 1966. I didn’t hear you sing “Suzanne” until someone gave me Songs of Leonard Cohen on cassette for my eighteenth birthday. That tape got a lot of play on the boombox in my dorm room.

Part of the reason I was so drawn to “Suzanne” was how the sound of the lines are lush and yet contained a dark shadow I couldn’t quite catch. I was fascinated by the image of a woman who will feed you tea and oranges, a woman who could “[get] you on her wavelength” and “[let] the river answer.” It hinted at a kind of freedom from attachment that was more comforting to me than a poem offering devotion might have been. Looking back, I’m pretty sure I unconsciously tried to grow up to be both the independent telepath immortalized in the song and the poet who immortalized her.

My mother was beautiful and young and the men around her—there were always men around her—came and went casually throughout my childhood. She told me she got rid of one guy because he got too handsy when saying goodnight. The year she gave me the folder of poems, she was dating two men who we referred to as Turkeyface One and Turkeyface Two. (I’ve long forgotten their real names.) The figure of Suzanne, who didn’t place high expectations on her lovers to stick around, felt familiar.

I left home for university at seventeen and kept moving to big cities: London, Chicago, New York, Toronto. In Chicago, though I wanted to be a writer, I spent most of my time in small rock clubs. Throughout my twenties I wore the ’90s version of Suzanne’s “rags and feathers from Salvation Army counters”—vintage T-shirts, corduroy flares, vinyl miniskirts, glitter. I worked at a poetry magazine and edited books for an independent record label. I practiced detachment. I tried to write poems. Eventually I met the man I married, a kindhearted drummer whose parents grew up, like you did, in Montreal.

Living in the East Village the year before and after September 11, 2001, I wrote my first poem that amounted to anything, a poem about crying in the back of a New York taxi. It became the oldest poem in my first book, which didn’t come out for another eight years. New York at that time felt oppressive and I was a mess. In an act of impulsive desperation, my future husband and I moved to Toronto, with no real plan for what would come next. It took me a while to settle into this new country, but there was something about Canada that helped me pull out of a paralyzing state of fear and anxiety, and find a way to flourish. I started a reading series, became the arts editor at a local weekly, completed a master’s degree, published my first poems. And when I look at my own work, I see the influence of “Suzanne” everywhere: from my attraction to certain sound patterns to the way I put similes together.

About five years ago, my mother was diagnosed with early onset frontal-lobe dementia. She was barely sixty and still looked young, lithe, and healthy. Because I’m an only child and she never married, she moved into a care facility in Buffalo, New York, which was as close to me as we could get her. She still knows me, and she loves to see her grandson—my son—who is three. Her physical health has been compromised by the antipsychotics she has to take to manage her paranoia. When I visit, we are more likely to spend time in a quiet room provided by the nursing home for visitors than to try to go to a restaurant or art museum. (She wanted to be a painter, and art museums were like church to her.) Instead, I sit and hold her hand as we watch my son “tear up the pea patch” in this institutional parlor. This is how she would have described his acts of mild mischief, throwing sugar packets around the room and stacking all the coffee creamers into a tower, before she got sick.

I’ve started reading her the poems she gave me so long ago. On my last visit, I read “Suzanne” to her a few times and I recorded her reaction on maybe the fourth read. At the end of each stanza, she said, “That’s a good one.” When I finished reading the poem she said, “That’s beautiful. I heard that before and I liked it.” I asked her which were her favourite lines, and she made shapes on the page with her finger: “I like these here and what you’re doing here and then here.” Her language skills have diminished, and she struggles to express herself, but in careful, halted speech she provided me with one of the best explanations for the pleasures of poetry I’ve ever heard.

Above all, I’m writing to thank you for this. For sharing the magic spell of sounds and images that make it easier, by far, to get through.