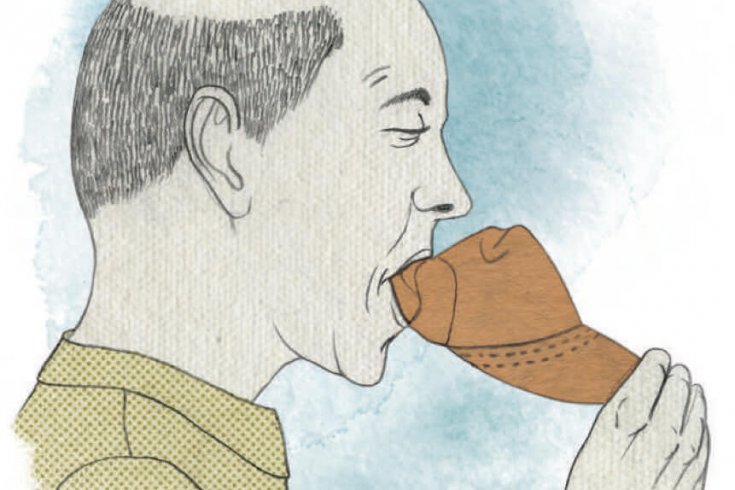 kings county — My first view of Nova Scotia’s Gaspereau valley was in the late 1970s from inside a tire tube, floating down a lazy stream with a beer in my hand. So my memory of the place is forever sepia tinted: vintage field trucks wheezing down two-lane roads, eagles wheeling overhead, the tang of apples stirring the sinuses. The Gaspereau was still Yesterday Country, I used to think, where women baked pies, men listened to the cbc farm report, and kids drank lemonade on hot summer days under a big tree. One night, I went to sleep in a field there, awoke in the morning, unzipped my tent, and found myself eye to eye with a cow.

Which is why it seemed a touch bewildering on a September day in 2008 to listen to a woman standing near that very spot, gushing about “terroir” — the combination of soil and microclimate that makes or breaks a bottle of wine — instead of beef prices, or whether the Acadia University football squad could break out of its slump. “With our Riesling, you taste the minerality of the soil. You experience the aspect and airflow of the upper slope,” explained Gina Haverstock, the thirty-one-year-old winemaker at Gaspereau Vineyards, as she stared out at the neat rows of grapevines that now stand where apples once grew and cattle grazed. “We try to let the grapes speak for themselves.”

A novel concept in a place where, a couple of decades back, the only well-known local wine was a hooch called Chipman’s Golden Glow. And where, just four years ago, a visiting wine writer wondered whether Nova Scotia wine was an oxymoron. Except nowadays 500 visitors a day, on average, show up to sample the Muscat and L’Acadie Blanc at this small boutique winery an hour southwest of Halifax. A three-hectare plot in the Gaspereau area goes for $200,000, versus $20,000 a decade ago. Rich investors are betting millions they can create wines here that anyone in the world will enjoy. “I’m no wine drinker,” says Howard Coldwell, eighty-one, who has watched the boom unfold from his farm across the road from the Gaspereau Winery, “but somebody sure likes what they do.

“Who, exactly? Not the locals at the Anvil Beverage Room, where screwdrivers and Molson Canadian are the tipples of choice. Or the folk scanning the isles at Nova Scotia Liquor Corp., where most of the homegrown wine isn’t even for sale. The buzz emanates mainly from the critics who first noticed the area’s icewines, then got excited about the local aromatic whites, known for their scent as much as their taste. “Of all the provinces in Canada making wine,” declares Tony Aspler, author of The Wine Atlas of Canada, “the affinity between wine and food is most brilliant in Nova Scotia.”

A few pioneers had suspected that grapes could thrive in pockets of the province offering temperate days and nights, sheltered valleys, and loamy soil. A couple of decades later, local grape growers and winemakers finally have proven track records; the wines routinely take home national and international awards — and credibility. No one is going to confuse any of the province’s wine areas with the Niagara Peninsula. But amid the bucolic hills, old-growth forest, and 200-year-old farmhouses, is Canada’s next big wine region being born?

Ignore the still-measly numbers — 938 hectares under vine and just ten wineries in production. The overall trends are what matter: freshly planted vineyards growing fancy new grape varieties, particularly in the Gaspereau-Annapolis Valley nexus in the southwest; established and emerging wineries experimenting with novel wines. No wonder there’s a rush to get in on the ground floor in the wine district. “I’m flipping excited,” declares Pete Luckett, a native of Nottingham, England, who owns a pair of high-end grocery stores near Halifax, and plans to have his first vintage of Gaspereau wine ready for sale in 2011. Jonathan Murray, a Bermuda surgeon who retired to the Annapolis Valley six years ago and has planted sixteen hectares of grapes on his seventy hectares of land, concurs. Next year, the first bottling from the Muir Murray Estate Winery will be ready for drinking. “There’s a lot of passion involved,” says Louise Murray, the winery’s director of marketing, who moved here from the Isle of Guernsey last July. “But we’re new to this. So we’re bringing in the best expertise we can find and learning from them.”

Gerry McConnell, a Halifax lawyer who made a fortune mining for gold in Africa, reads from the same playbook. Seven years ago, he hired Peter Gamble, an Ontario-based winery consultant, and asked him to consider the Nova Scotia terroir and see if it could produce something truly special. “In my view,” says Gamble, “this was the finest region outside Champagne for the production of sparkling wines.” Since then, McConnell has plowed more than $1.5 million into his Benjamin Bridge Winery, including hiring Champagne expert Raphaël Brisbois to help create its signature sparking wine.

Nobody had such aspirations for the earliest Nova Scotia wines. Their rising-star status says something significant about how things are changing in places like the Annapolis Valley, where old-style agriculture is in rough shape. The area is undergoing a mini-metamorphosis, partly driven by a changing demographic — the valley is gaining population since being discovered by retirees and big-city downshifters — and partly by the “eat local” trend that is changing tastes everywhere.

The upshot: a countryside increasingly populated by farmers growing organic vegetables and raising alpacas, shops selling free trade coffee, and B&Bs on the hunt for well-heeled travellers. The checkout line at the local hardware store is almost as likely to include a yurt builder as a third-generation-Baptist cattle farmer. The Annapolis Valley is even undergoing an actual culinary moment, with the emergence of a few chefs who can work magic with the local produce and meat.

Which brings us back to wine. A good bottle from an area winery deepens the experience, according to Michael Howell, who owns Tempest restaurant in Wolfville, and served a collection of provincial wines when he prepared a meal of regional cuisine last summer at James Beard House, a prestigious New York dining room. “Culinary and wine people are starting to know about Nova Scotia,” says Howell. “The challenge is getting the local citizenry to buy in.” Something that tastes good being quaffed in a tire tube, while floating past a scene of pastoral beauty, would be a start.

The Fight to Save Public Transit

When Cities Are Built for White Men

Why It’s Impossible to Buy a House