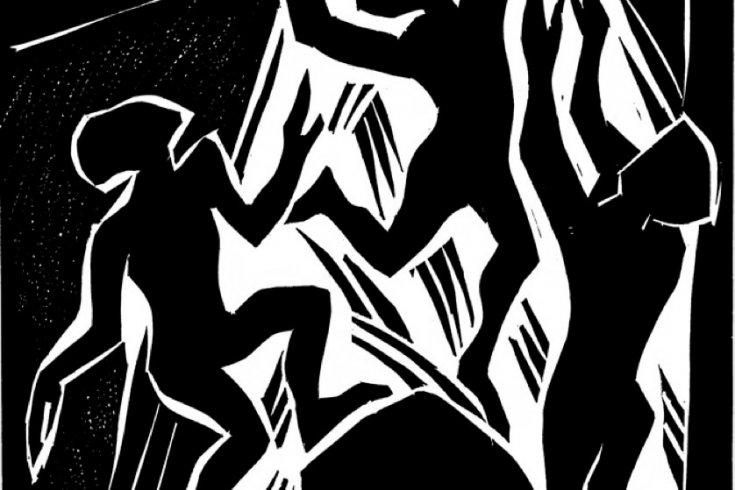 brooklyn — On a November night, an audience gathered in the Great Room at American Opera Projects headquarters to get an early glimpse of an unlikely addition to the cultural canon: an opera based on Joseph Conrad’s Heart of Darkness. The librettist, London artist Tom Phillips (whose portrait of Iris Murdoch hangs in Britain’s National PortraitGallery), introduced the performance by offering interpretative outtakes from his umpteen readings of the classic novella, published in 1902.

The first time he read the book, as a teenager in the 1950s, Phillips reached the same conclusion as his son would years later: “Nothing happens.” The second time he picked it up, Phillips was trekking across the Kalahari Desert, turning the pages by the light of a campfire. For his fifth reading, he borrowed a girlfriend’s copy and marked up the margins with notes. “It spoke,” he said. “Bits kept screaming out in a special way: ‘I’m a libretto! I’m a libretto! I’m a libretto!’” Phillips obediently wrote down this libretto, using only words from the original text and Conrad’s “Congo Diary.” “It is lifted straight from the Conrad,” he said.

On special occasions like these workshops, Phillips wears two pashminas, in Oxford and “shrill Brazil” blues, artfully draped around his neck — not exactly the standard kit for someone who is also a zealous Ping-Pong player (Salman Rushdie is a long-time opponent — a “sloppy” player whom Phillips almost always defeats). His collaborator is a “top-tip” composer, the sartorially snappy Tarik O’Regan, who favours cashmer eovercoats and herringbone trousers. At thirty, O’Regan is a two-time British Composer Award winner.

Before raising the curtain on their opera — one act, twenty-four scenes, running for an hour and fourteen minutes, no intermission — the maestros encouraged the audience to watch and listen with a critic’s senses. The feedback, both in Brooklyn and during another workshop at the Institute for Advanced Study in Princeton, will prepare them for the full-scale production, slated for 2009. (“There is already a fight for it,” said Phillips; Vancouver Opera has expressed interest.)

O’Regan’s score aroused a visceral response, the main theme of lower-octave melodies leavened with passages of “pulsing polytonality,” à la Philip Glass. He acknowledged that his main influence was the British composer Benjamin Britten (The Turn of the Screw, The Rape of Lucretia), who in the 1940s popular-ized the form of chamber opera — an opera of reduced instrumental forces, meant to accommodate a desire for works that could easily be toured and quickly mounted in small spaces. O’Regan composed Heart of Darkness for eight singers and a thirteen-piece orchestra, though for the workshops the only instrumentation was an suv-sized Model D Steinway. And there were no costumes or sets; the cast conveyed the story with expressive yet measured dramatizations, as well as the odd prop: a flask, a pack of tobacco, a diary, a letter. Backstage, the singers were popping Oreos to keep their sugar levels up.

Front of house, the fidgety audience provided an early study in the opera’s reception. One man did the pensive head scratch, adjusting and readjusting his Yankees toque. Another conducted from his seat. A couple shifted two seats over, angling for a better view. Even subtle body language was telling — leaning forward (interested, intrigued) or resting back (puzzled, maybe fatigued). “It’s a simple trunk movement,” said Phillips. He had his antennae high.

Put the prospect of Heart of Darkness, the opera, to a well-read group, and inevitably someone will burst into song, offering the book’s most famous and operatic line in mock booming bass: “The horror! The horror!” But otherwise, this intensely interior and highly symbolic novella — chronicling Marlow’s psychological journey during a steamboat journey up the Congo River — is not obvious opera material. Orson Welles mounted it as a radio play in 1938 and had designs on a screen adaptation for his Hollywood debut, but his producers nixed the idea after reading his costly and politicized script. Then, in 1979, came Francis Ford Coppola’s Apocalypse Now, an epic production during which the director nearly lost his wife and his mind, and on three occasions threatened to take his life. But the work has never been set to music and sung.

“Conrad himself said Heart of Darkness is a musical thing,” noted Phillips, citing for corroboration the author’s own remarks in the preface to the 1917 edition: “It was like another art altogether,” wrote Conrad. “That somber theme had to be given a sinister resonance, a tonality of its own, a continued vibration that, I hoped, would hang in the air and dwell on the ear after the last note had been struck.” Conrad, Phillips felt, would approve.

But at the workshop, reviews were mixed. “Too dark,” said someone on the way out of the Princeton performance.

“If you want happy, go see Mamma Mia!” responded Dvorit Samid (out of earshot). A member of the Princeton Friends of Opera, Samid later commented that the work “was most captivating and inspiring — not dark. It is human nature that has dark corners.”

At a reception following the Brooklyn performance, Oliver Gooch, musical director for the UK premiere, was satisfied, if a bit unnerved. The tempo had galloped away with him when little things started to go wrong and the adrenalin of anxiety started pumping. “The heart is my metronome,” he explained, flushed and tapping his chest. Despite the unintentional allegro, O’Regan worried that the ending dragged when it should have unfurled, like a Slinky let go in mid-air. Even Phillips, exhausted from his labours, nodded off for a few bars around scene 22.”

MAMMA MIA! VS. HEART OF DARKNESS

On adoration
MM: See that girl, watch that scene, diggin’ the dancing queen.
HD: He had the power to charm or frighten rudimentary souls into an aggravated witch-dance in his honour.

On avarice
HD: It was just robbery with violence, aggravated murder on a great scale, and men going at it blind.

On adversity
MM: Super trouper beams are gonna blind me, but I won’t feel blue.
HD: We will all be butchered in this fog.