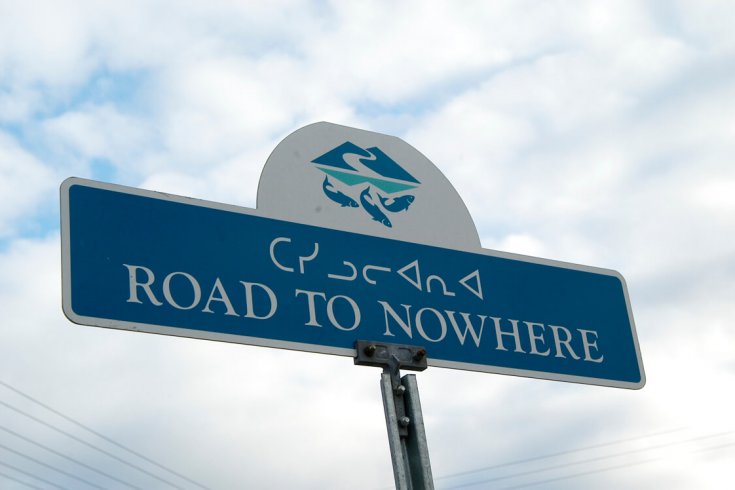 iqaluit — “Seals are banned from my car. The fat is like glue and stinks for weeks,” Nicole Pauzé says from behind the wheel of her suv. “Polar bear smells grosser,” insists one of three parka-shrouded passengers wedged into the back seat. “Don’t even talk to me until you’ve shared a cab with fermented walrus,” says another.

Taxi talk on a cold, busy Friday night in Canada’s newest capital. Iqaluit’s population has nearly doubled over the last decade, and the town now suffers mini rush hours and traffic jams, especially at the major intersection, Four Corners, where signs stop traffic in both English and Inuktitut. Hummers and motorcycles have recently joined the parade of atvs and big old American cars, nicknamed “belugas.” But there is still no traffic light in Iqaluit, no traditional sidewalk, and not a single public bus — hence the eighty-odd licensed taxis serving a population of about 7,000.

The drivers are just the kind of characters you’d expect in a frontier town just shy of the Arctic Circle. Jean Lemieux was warming up a harmonica when I stepped into his cab. “Wanna hear my weirdest piece of music?” he asked. ” ‘Ode to Joy’ — rock-fusion version.” Without awaiting my reply or finding out where I was headed, he began to jam. Another driver, André Pesant, had no fingers. Watching him spin the wheel with two palms and a single thumb was mesmerizing. “I tripped over a snowbank at a runway party in January and kinda fell asleep.” When his friends found him forty minutes later, his hands were as solid as Pinocchio’s. Another driver told me he had just run over an Arctic hare. “Gave it to my dispatcher,” he said. “He’s cooking it up for dinner.”

Nicole, like most Iqaluit cabbies, is from Quebec. She drives for Pai-Pa Taxis, one of two main companies (Caribou Cabs is the other). A female taxi driver is a rarity in this often rowdy town, but this sixty-year-old sweet dumpling of a great-grandmother is no pushover. In September 2005, she grabbed a twelve inch knife from a would-be robber on a remote stretch of road while clobbering him with her microphone. When she gunned the car to eighty kilometres per hour to get back to town, he decided to bail rather than face her. Police dogs tracked him down half an hour later.

Some male drivers tell stories of normally shy Inuit women becoming shockingly forward, sometimes violently so, when drunk. Several speak of women stripping naked and demanding sex. Though he hasn’t personally been a victim, Philip Perkins, a twenty-one-year Iqaluit taxi veteran, knows what they’re talking about. “Women can be as aggressive and strong as men,” says Perkins, who now refuses to drive after dark. “There’s a full moon every night in Iqaluit.” Some residents believe the drivers, who Perkins admits have a reputation as purveyors of illegal substances, contribute to the problem. “Two or three passengers a week ask, ‘Got a bottle or a gram?’ ” No surprise in a town where liquor is sold only at restaurants and hotels and a bootlegged forty-ouncer goes for up to $150.

A flat rate of $5 takes you anywhere on Iqaluit’s fifty-three kilometres of road. Recently, the roads got names. When I asked Alex, a Russian driver, if anyone actually uses them, he shouted, “You crazy?” and slowed alongside a sign that read “Niaqunngusiaq Road.” “What the hell is that?” Everybody navigates using house numbers and landmarks: “It’s 723, just by the North Mart.” But since houses often aren’t numbered in sequence, it’s up to new drivers to memorize that house 197 is across the street from 343 and that 413 is next to 1600. Typical driver training starts with a list of house numbers. “I tell them to call me when they find them all,” says Craig Dunphy, the general manager of Pai-Pa. “It takes them about two days.”

Nicole keeps picking up passengers until we fill up like an Arctic jitney. She remembers all their house numbers and drops them in order, or as the route dictates. Over many years of sharing cabs, I’ve ridden with locals like Jimmy Ekho, a.k.a. “Arctic Elvis,” whose CD cover featured the Inuk baritone decked out in sealskin bell-bottoms. Then there was Baptist preacher Reverend Gary Childs, from Pecos, Texas, who also ran the local party shop/flower shop/photography studio. “Ah’m a carpenter, just like Jesus was,” he drawled, pulling a carpenter’s level from his bag and holding it at eye height. “Many nights ah’ve burned the midnight oil freeing people’s souls. Ah’m just helping them keep their bubble between the lines.”

In the disconcerting 2 a.m. dusk, Nicole picks up part of the crowd spilling from the Legion. Then it’s up to Happy Valley and the new cookie-cutter suburb dub-bed Legoland to put partygoers to bed.

Most folks get into Nicole’s car and say simply, “Home.” Several Inuit elders say nothing at all. “I know where everyone lives,” she says. “During the day they just say ‘work’ and I take them.” She clearly loves the people, and they love her back, waving as we drive by.
“They behave with me, and I don’t judge them.” Once, a couple started having sex in the back seat. Nicole pulled over and waited. “When they finished, I took them home.”