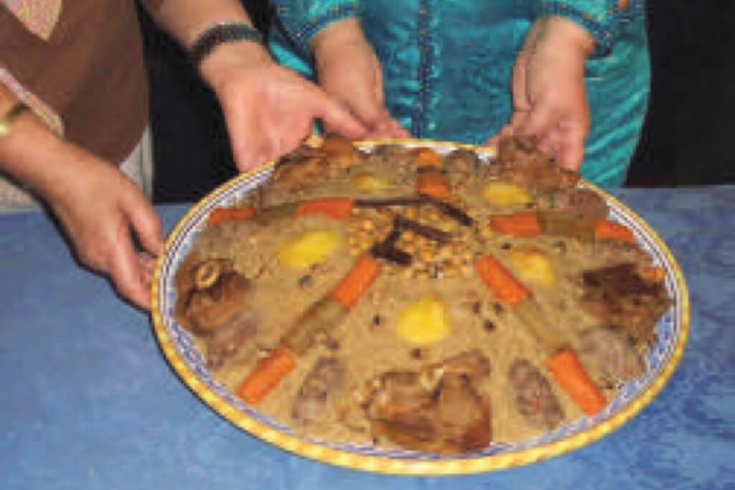 san vito lo capo — With national anthems booming, flag-waving beauties striding about, and speeches aplenty on ethnic and religious harmony, the opening evening of the international Cous Cous Fest feels more like a Miss World pageant than a cook-off. Tonight, under a blazing white tent erected in San Vito’s defunct medieval convent, gastronomy experts, ambassadors, and the odd journalist have gathered to revel in culinary creations from around the Mediterranean and beyond — and to judge them.

Chubby-cheeked, hawk-eyed, and razor-tongued, my fellow judges — most of them top culinary critics, unlike me seem about as peace-loving as Attila the Hun. The games begin with the Italian entry. As loudspeakers shake out Italy’s bellicose anthem, two floppy-hatted chefs march to judgment with a fish dish: sea bass and San Pietro fish nestled beside a downy bed of durum-wheat couscous, drenched in sauce and sprinkled with pistachios. Before I can slide my fork in, the Rai-Televideo food reporter next to me is already gesticulating her disapproval: the fish and couscous are separate rather than thrown together stew-like. “This is not right, not normal,” she protests. “Couscous is about the harmony and fusion of tastes. This is a deconstructed couscous!” Deconstructed or not, the preparation greets my nose with a delicious whiff of fish sauce laced with cinnamon, and I dig in. Fabulous. I flag a waiter for seconds.

Next up is Ivory Coast’s offering: a millet couscous propped on a bed of eggplant and topped with gleaming pink shrimp, prepared by a Palermo-based chef known as Mama Africa. The dish has my plebeian taste buds turning somersaults; my fellow adjudicators concede it a round of reluctant nods.

A scratchy recording of the Palestinian anthem plays next, sounding like a high-school marching band overloaded with tubas. My tablemate eyes the approaching platter, carried by a sweating young Jerusalem hotel chef and his helper. “Just watch,” she whispers, “theirs will be in the shape of Sharon’s head.”Geopolitical tensions have occasionally marred the intercultural encounter: two years ago, when Israel took a special prize for originality, the Palestinian chefs accused their neighbours of stealing not just their land, but also their recipes. When the Palestinian mound of dark brown couscous topped with sautéed onion and a swirl of pomegranate kernels, chickpeas, and bits of chicken is paraded before our eyes, the Rai-Televideo reporter gives a nod of satisfaction. “What did I tell you? Just like Sharon.” Then the cherub-faced food critic for the Italian weekly L’espresso really lets the Palestinians have it. “The oil is rancid, the eggplant is undercooked, the chicken is rubber. Un disastro.” A pouty blond editor of a gourmet magazine delivers the final blow: “Wholly insignificant.”

To wrap up night one, Senegal comes along with a zesty lamb dish. The Senegalese ambassador imparts a few words about Muslim-Christian harmony in his nation, and it’s going over smoothly until the magazine editor gets the mic. “Veramente deludente” — a real letdown — is her resounding verdict. “I’m sorry,” she adds, looking about as contrite as an eagle swooping in for the kill, “but I didn’t think it possible that a dish with such strong meat could render such little flavour.”

Despite the caustic judging, the competition is all in the name of world peace, according to Giuseppe Peraino, the short, handsome, shiny-scalped mayor of this tiny Sicilian fishing village. Nine years ago, he founded this bonanza of cosmopolitan concord and couscous — a staple in Mediterranean cultures and popular in the Middle East — lent itself to the purpose. “The event unites different nations and cultures,” Peraino had explained earlier, “just like the little beads of grain gathered on the platter.”

Even after a vigorous stroll the next morning, I take my place for night two of adjudicating feeling as if a good chunk of West Africa is still sitting half-digested in my gut. The Israeli chefs burst into the tent first with a Jewish lamb and beef couscous stew topped with an olive branch. I’m beguiled by their spicy meat, eggplant, and chickpea combo and nearly lick my plate clean. After Israel, Tunisia presents a concoction of elaborately arranged octopus that melts like butter on my tongue. “Wow, so tender!” I enthuse to the food editor. She purses her lips and sets me straight: the sauce is insipid, and anyone can soften up sea-food by freezing and thawing it. Morocco lays it on next with a regal almondstudded squash and quail creation that’s fit for a wedding, a funeral, or pretty much any festive occasion — couscous is the country’s dish for all seasons. Algeria brings up the rear with a mountaineer’s mutton, veal, and goat stew. Full but not defeated, my Rai-Televideo tablemate gets in a last jab before we hand in our marks. “The tastes are fused together nicely,” she concedes, “but it’s a dish without character, without aggression.” So much for peace on a platter.

The closing festivities take place on the third night, in San Vito’s piazza centrale, where dignitaries, chefs, and judges alike are herded onstage to cheers from the crowds. Peraino stands dwarfed and blushing between two towering starlets. Finally, the winner is announced: Ivory Coast’s Mama Africa. The crowd erupts, the cooks embrace, and more music blasts.

As the guests head to the beach — word has it a belly dancer is performing — I fall in with the food critic from the Italian food channel Gambero Rosso. Had we crowned a worthy champion, I ask? He looks bemused. “We judges don’t know anything about the history or mentality or culture behind these dishes,” he confesses. “So it’s really not possible for us to judge couscous. This is just theatre. Funny, crazy theatre.”