The Meaning of Mentorship | The Walrus
Skip to content

When twenty-six-year-old Taiwo Bah talks about his best friend Kempton Howard, a reminiscent smile creeps onto his face—the kind of smile you see on people when they talk about the good old days when life was simpler, days were longer, and friendships were meant to last a lifetime. The two met when they were fourteen, in their downtown Toronto high-rise building, and bonded instantly over their love of basketball, music, and girls. “I remember going over to his house for the first time and seeing how big his television was.” Bah says jokingly. “We were really good friends after that day.”

Over the years, their friendship blossomed. Howard turned into a popular ladies man who starred on the high school basketball team and Bah was his studious partner in crime. “You couldn’t pigeonhole us,” says Bah. “We were big nerds, but would also listen to the most gangster rap albums.”

Growing up in one of Toronto’s low-income communities, the two often didn’t have the money to get the latest gadgets or go on vacations to faraway places, but they made do with what they had, and were forced to learn valuable life lessons early on. “We were told that all you have to have is a dream. Nothing is guaranteed in life, you have to make things happen for you.”

The friends were more than willing to put in the work required to ensure a brighter future for themselves and the people around them. Committed to his neighbourhood, Howard took a job at the local community centre working with kids. “He loved them. He started a leadership program and coached basketball,” says Bah. “He was so popular with the kids. They connected because he was just like one of them.”

Over time, Bah and Howard’s friendship turned into a strong brotherhood, with Bah even befriending Kempton’s younger brother, Kareem. Often the friends would talk about their aspirations and try to think of new ways of making life easier. “[Kempton] had a million dreams. He would have ideas about everything—rapping, clothing lines, etc.”

But his dreams were shattered on December 13, 2003, when Howard was shot dead in their apartment building by a group of youth with whom he had an altercation the night before. According to Bah, Howard was walking several youths home after a dance at the community centre when he saw a group of guys smoking marijuana outside the building. “He told them they shouldn’t do that because there are kids around and continued to walk them home. He came back and the guys were still there and more words were exchanged,” says Bah.

The next morning, the men came to their building, shot Howard in his hallway, and fled. Howard died at the age of twenty-three. “[His killers] robbed me of a chance to say goodbye to my best friend,” says Bah, who insists he was never angry, but felt only sadness due to his loss. Howard’s death shook Bah to his core, but he felt a responsibility to step up and be there for his friend’s family, especially younger brother Kareem. “It’s not something I had to do, but it was something I wanted to do,” Bah explains. “Kareem dealt with everything really well. He even helped me deal with losing a best friend.”

The entire community came together to mourn the loss of Howard. It’s one of the many reasons Bah is proud to have grown up in an area many would consider undesirable. “I always appreciated where we grew up. It prepares you for anything. Although at times it can be rough, people care about each other and it showed when Kempton died.”

In the three years following his friend’s death, Bah has continued to work hard to keep Howard’s legacy alive. He graduated from Seneca College and now works for the City of Toronto. Bah still hangs out with some of the youth Howard worked with at the community centre, and sees Kareem at least weekly, talking about life, love, and loss. “I really hope that Kareem will not have to live in his brother’s shadow forever. I’d love to see him become empowered and know that whatever his dreams are, he can achieve them.”

In the fight to achieve those dreams, Bah will be there every step of the way. 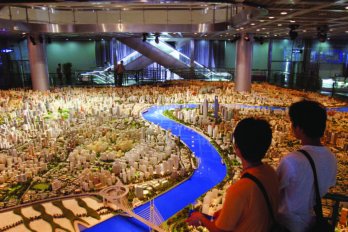