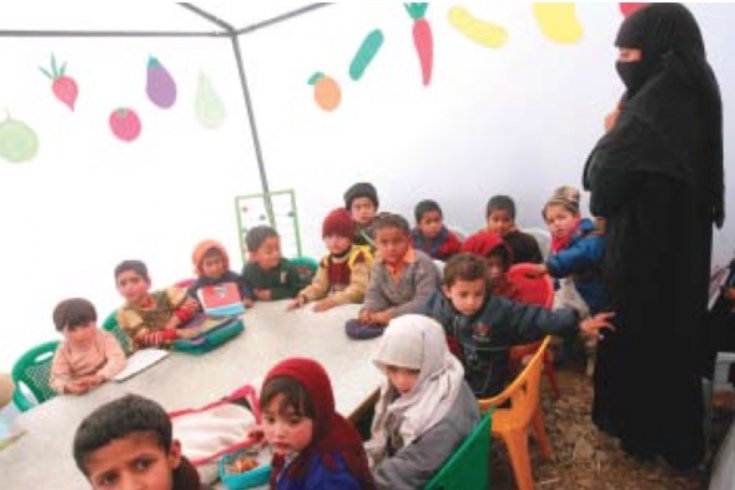 Since last October’s earthquake, organizations espousing the Islamization of Pakistan have been providing services such as education to Kashmiris.

Muzaffarabad—It’s a warm winters day in the capital of Pakistan-controlled Kashmir. It has snowed only once this year, on New Year’s Day, when an inch-thick coat covered the city. Today, the surrounding valley is peppered with countless blue and white tents tucked between the banks of the rivers Jhelum and Neelam and the rubble from last October’s earthquake. Six months after the quake, which destroyed virtually half of this city of nearly one million people, Muzaffarabad is returning to life. Fruit and vegetable sellers, butchers, and shawl makers are plying their wares in the busy marketplace. Music and video stores are blaring Bollywood tunes.

Along the Neelam stands a tent community run by the Jamaat-e-Islami, a sixty-five-year-old organization dedicated to seeing Pakistan become an Islamic republic. Canopies have been erected here in fine, organized lines, divided by a broad packed-mud path running east to west. A stroll along this path offers a window into the increasingly tentacular reach of the Jamaat: banners advertise Jamiat Tuleba Arabia, its student wing; Al-Khidmat, an associated welfare arm; and pima, Al-Khidmat’s medical association. Word is out among ordinary Kashmiris that the Jamaat’s relief work after the quake outshone the government’s. And the organization’s long-term initiatives, especially in education and health care, are threatening to do the same. The Jamaat has a young, well-educated, and highly motivated support base and a strong, if shadowy, funding base. It stands poised to become a driving force for the political Islamization of Pakistan, a country of 160 million people, nearly all of them Muslim, that is governed by a secular dictatorship.

On the west side of the tent village, a bespectacled and bearded young man stands by a large dome-shaped tent that doubles as both community mosque and boys’ madrassa (Islamic school). The Quran is taught here beneath a banner that reads Hizbul Mujahideen, the name of a militant organization closely linked to the Jamaat. The young man outside the tent, Javed Iqbal, is a graduate of a madrassa. “After the earthquake all the Jamaat’s members volunteered their services,” he says.” I was sent here to teach the Quran.” As Iqbal speaks, young boys and girls pass by, shyly offering greetings.” It has rained a few times this week, so the classes have been cancelled,” Iqbal explains.

The Jamaat has been officially operating in Kashmir since 1974. Less than 1 percent of the region’s three million people are members, and the party holds no seats in the legislative assembly, but it appears poised to make gains in regional elections scheduled for June. The party’s main man in Kashmir, Sardar Ejaz Afzal Khan, is running for office under the banner of the Muttahida Majlis-e-Amal, a coalition of like-minded parties. Sitting in his office in Rawalpindi, 140 kilometres from Muzaffarabad, Khan, who at nearly fifty years old sports a chiselled beard and a cherubic smile, tells me, “Education is a way to build a society.” Khan holds three graduate degrees—in Islamic studies, political science, and law—and counts in his family two lawyers, three engineers, and six doctors (including his wife). The Jamaat’s goal, however, is not merely professional education, but proselytization. “Being Muslims, we are the caliphs of God on earth,” says Khan. “Our purpose is to get people to join the nation of Islam fully, not half and half.”

” Today someone is talking about enlightened moderation,” he continues, referring obliquely to Pakistan’s president, Pervez Musharraf, who espouses Atatürk-style secularism. “We don’t believe in enlightened moderation. We believe Islam is the most enlightened, most modern.” Looking at Pakistan’s secular education system, its hard to argue the point. In 2004, Musharraf announced plans to boost the country’s education budget from 1 percent of total expenditures to a still-picayune 4 percent, but progress has been difficult to spot. Former Pakistani cricketer and current Member of Parliament Imran Khan says, “There are more than 470 schools in my district. More than half are non-operational, and those that are have very low attendance rates.” These so-called “ghost” schools are mushrooming across Pakistan. “The students they produce,” Khan asserts, “are basically unemployable.”

The Jamaat controls its educational institutions via a complex web of organizations, with some links maintained overtly, others covertly. For every local madrassa or health centre, a parent body, often a trust, has been formed, lending the network the appearance of many unconnected entities. The school’s funding mechanisms are poorly understood. Official sources suggest that money comes in from foreign governments. Another portion almost certainly comes from Muslims living abroad.

Some of the Jamaat-controlled bodies are expressly religious; others are secular. Some blur the lines. Among the difficult-to-classify is the Rural Education And Development (read) Foundation, which oversees more than 320 schools and operates in virtually every village in Pakistani Kashmir. At read headquarters in Muzaffarabad, one of the organization’s trustees, Ghulam Mustafa, a portly, bearded man, sits behind a large wooden desk in a tent on the site of a coed science college. A former economics professor, Mustafa expresses frustration with the government system. “You cannot waste talent,” he insists. Mustafa acknowledges that read has a common ideology with the Jamaat, to which he also belongs. “We say we need to produce a good Muslim,” he says. “When you come out of the system and you are a good Muslim, then you will also be a good human being.”

The danger that some of these schools might become (or already are) places where extremist versions of Islam are fomented is a possibility, of course. But the welfare approach adopted by the Jamaat seems rather to be a case study from two quite different textbooks: the one used by missionary organizations trying to gain converts in poor rural communities, and the one used by political organizations seeking to win votes. If they succeed, they will no doubt encounter the problem all expanding movements do, of maintaining fealty to their ideology.

At the Institute of Islamic Studies, a school established by a Jamaat partner organization in Rawalakot, northeast of Muzaffarabad, some 150 boys sway back and forth, repeating the words of three instructors. One of the teachers, Ghulam Mustaqeem, looks like a boy himself, but wields authority with a stick that he isnt afraid to employ. Outside the classroom, Mustaqeem appears terribly vulnerable. Twenty years old, he is himself the product of a madrassa, though he didn’t study past the fifth grade. In discussing Kashmir’s fortunes, he offers no xenophobic speeches or impassioned pleas for Islamic values. Instead he says simply, “We should all work together for peace, all us brothers. Everyone.”

Sonya Fatah is the editor-in-chief of J-Source and an assistant professor at the Ryerson School of Journalism. 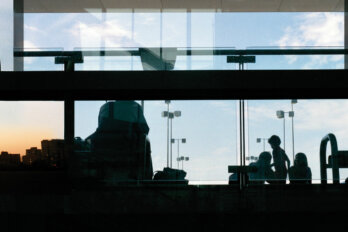