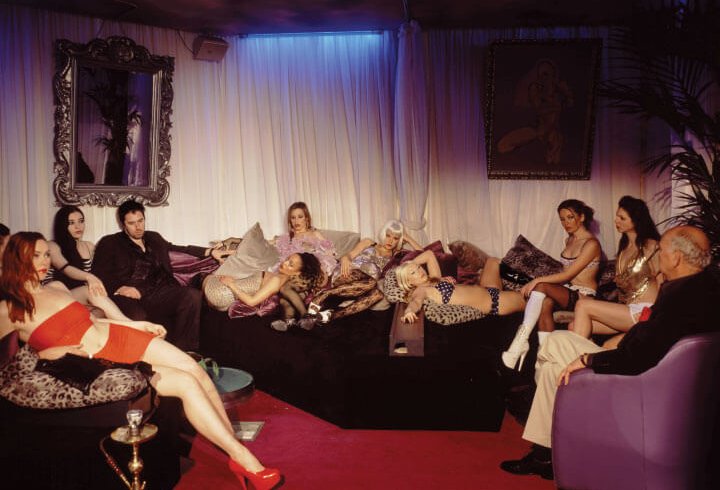 “Novelist and poet Thomas Hardy used to look through old editions of his local paper, the Dorset County Chronicle, for stories to inspire him. I grew up one village over from Hardy. I have always been interested in stories from my local paper, the Hackney Gazette, where headlines often seemed to have recurring themes—muggings, attacks, rapes—actually a lot of the universal themes that appear in art history. I decided to use the news stories, and in particular the headlines from the Gazette, to create photographic works.

“My photograph ‘Father and Son run £2m Vice Racket from Sauna’ is based on the story of a local sauna that was turned into a brothel. This issue comes up a lot in England, with so many sex workers smuggled in from eastern Europe.I read a series of articles in the Gazette about these saunas and the women who worked them, which reminded me of some classical French paintings, particularly Ingres’s The Turkish Bath. The photo was taken in a pub with a strip club downstairs, in the vip lounge where certain clients are taken for, oh I don’t know…. I wanted to capture the sleazy atmosphere. I’m trying to base the picture in some sort of reality. The furniture, lighting, and drapes are all similar to what you’d find in a brothel.

“‘Hallowe’en Horror’ is another story from the Gazette, and it’s another common issue: violence on Hallowe’en. The photograph is also inspired by Caravaggio’s The Beheading of Saint John the Baptist, where a group of people are watching as John the Baptist is about to have his head cut off. I’ve seen many pictures at the National Gallery, in London, that focus on suffering, despair, and violence. It’s interesting that much of our suffering and despair today seems to originate from trivial events, like road rage or people getting pissed off if you don’t give them sweets on Hallowe’en. Some kids will break your bones over that. Violence has become acceptable as a response to the trivial, rather than the great things that were talked about in the Bible, like Jesus being crucified or Saint John being decapitated.

“Everything I need as an artist is in Hackney. I don’t need to go to war zones or, like Paul Gauguin, travel to the South Pacific. I get the Hackney Gazette every week and it’s a consistently depressing read. The headlines are disposable—in the paper one week, gone the next. The headlines keep changing, but the themes repeat. I don’t think readers give them much thought, but when the same subject matter is reconstructed, staged, and put in an art gallery, people do consider the social implications more seriously.

“The headlines” are no longer ephemeral. The Gazette knows about my work. They put a billboard up on the street a few weeks ago—it has a headline that reads, “Gazette headlines become works of art.”