Catch of the Day | The Walrus
Skip to content 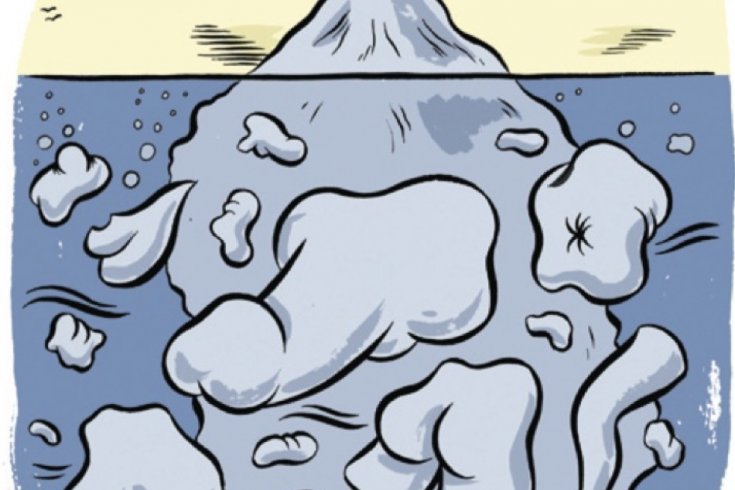 Depending on the tide, at roughly 5 a.m. every Sunday morning at Cape Spear, Newfoundland, the most easterly point in North America, two frogmen suit up and take the plunge into the cold Atlantic. They are part of a diverse team spending considerable time and money in pursuit of Canada’s latest nautical phenomenon, sexy bergy bits—or, as they are known on the mainland, “parts of icebergs.” Using sophisticated, low-speed cameras, the sea hunters have discovered numerous bergy bits in the shapes of breasts, thighs, calves, and high-heeled shoes. Less common are enormous ear lobes and over-sized, odd-shaped male genitalia.

Jeff Bridger, a baldheaded, moon-faced octogenarian, wonders if sexy bergy bits “are everywheres” or if they are indigenous to “the New founde lande”?

“Doubt they haves ‘em up-along,” Jeff laughs a hoarse, sexy laugh while struggling into his under-sized wet suit. “My son, they’re some sexy. Can’t see ‘em being like this in Greenland. No, nor Norway, neither . . . not so sexy as this . . . not for love nor money.”

Several months ago, National Geographic did a pictorial on the Bridgers’ work, but it was jettisoned when the university lab sent them shapes too horrendous to look at. “What the hell do they know,” Jeff says, “with their white aprons and clipboards? Them bureaucrats already shagged up the fishery, I’ll be damned if I let ‘em ruin bergy-biting.”

“They’re a strange bunch, that crowd,” Reg intones, flattening his shining black hair. “You know, they don’t see t’ings the way we do. It’s like . . . like they’re seeing through glasses that are too t’ick.”

To date, neither the university nor the government has officially entered the growing debate on bergy-biting. A government official from Lands and Oceans told me he had “no comment” on the Bridger family’s new line of work.

As he wades into the coldest water on the continent, I ask Reg if it’s dangerous work.

“Dangerous,” Jeff hollers over his shoulder, “Jazus, ole man, you don’t know the half of it. Last time out we had a devil of a big ‘un lassoed and she turned on us . . . . My son, my son . . . . You should’ve heard the racket. It was murder on the ears. Bloody murder. Like a billion firecrackers goin’ off all to once.”

They both went on to explain that the monster bergy-bit flipped, revealing an elephantine anus, which they were sure would’ve sold on Ebay for much more than the $28,000 (US) netted by the grilled-cheese Madonna. “Jazus, it was a devil of a one to let get away,” Reg says, “We’d of made a mint on that one. Ringling Brothers or the Great Wallenda Circus would’ve paid a pretty penny for that one for sure. My gawd, you should’ve seen the size of ‘er.”

Besides posting their wares on Ebay, the brothers sell the smaller bergy-bits—i.e., the bite-sized ones—to local nightclub owners to be served as sexy bergy cubes. Drinks enhanced by the pristine northern treats sell for an extra two dollars.

“Bergy-cubes?” Sam Dinn, owner of the Killick Pub and Restaurant, shouts. “Don’t be talkin’. Can’t keep ‘em in the fridge. Sells more bergy-cube drinks than bottles of beer. Everyone’s mad about ‘em. Even the teetotallers comes here, just to suck on ‘em, you know.”

Harold Haines, accordion aficionado and lead singer in the popular local band Giant Squid, has just composed a tune in honour of the new ice phenomenon: Bergy-bits on the Side is available at Red’s Records and Poster Shop. And it is rumoured that a bergy-bit will enhance the cover of Great Big Sea’s new CD.

Readers wishing to bid on the latest catches (or photographs of same) by the Bridger brothers, or who would simply like to learn more about this sexy new down-east wave, may do so by visiting www.sexybergy-bits.com.