Hot Zones and Human Clusters | The Walrus
Skip to content 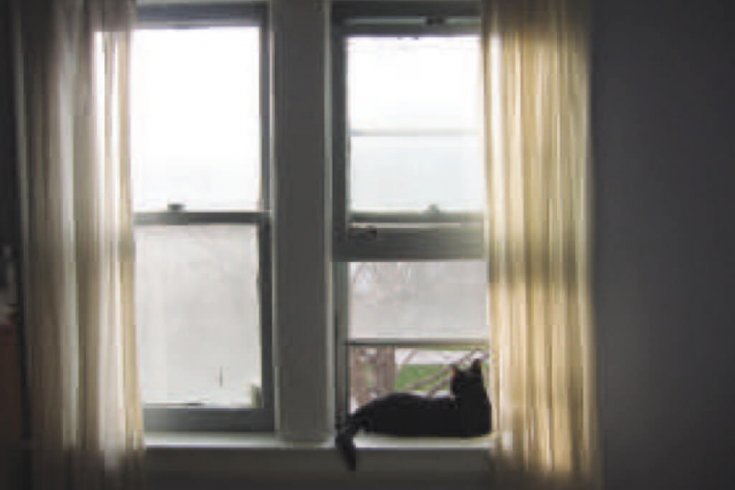 Breached Defences: The window through which the offending mosquito came / Photograph by Lisa Rundle

toronto—We dined out on the story for weeks. “I’ve never met anyone with West Nile before,” people would say. “Do you really have it? Both of you?”

Why, yes. I was number 36 to be diagnosed in Toronto during the 2003 season. My partner was number 22. And with only forty-four human cases in the city this year, it was something to, well, crow about.

It’s been less than three years since dead birds started showing up in Canada, victims of a mysterious disease caused by West Nile virus, named after the region in Uganda where it first appeared in 1937. By the time it arrived near Windsor, Ontario, it had been in the U.S. for two years: in 1999, wild crows were found dead at the Bronx Zoo, having been infected by mosquitoes carrying the virus. Those mosquitoes could also transmit it to humans, and they had: the resulting outbreak that year claimed seven human lives.

Since then, public-health units all over North America have been monitoring mosquito, bird, and human populations, applying preventative larvicide, and running public-education campaigns. More than 4,000 people in North America were diagnosed with West Nile in 2002. Last year’s season ended with 463 confirmed cases and ten deaths in Canada (Saskatchewan and Alberta were hit the hardest), and 8,567 confirmed cases and 199 deaths in the United States.

Torontonians were caught off guard. In a city preoccupied with SARS, West Nile somehow didn’t seem to be a clear and present danger. Despite frequent news specials, often about the same few tragic victims, the public was never galvanized by a sense of urgency. More people die each year from the flu; the risk didn’t seem acute. And given that West Nile isn’t contagious among humans, the mini-epidemic made a great conversation starter, and stopper.

For me it began with mysterious red spots. I also had hip pain, sore skin, swollen glands, and general weakness and fatigue. My partner had a more typical onset – an initial fever that led to her earlier diagnosis, even though we are thought to have contracted it at the same time, maybe even via the same gluttonous mosquito. (It was partly our fault; we had a hole in the screen of our bedroom window that we’d never bothered to fix.)

We weren’t overly worried about the diagnosis, and neither was our doctor. If anything, it was a little exciting – like seeing yourself caught in the background of a TV news report, inadvertently close to the limelight. The doctor mentioned that Public Health was pretty excited about our cases as well. It turns out two people in one household is something of an epidemiological coup because there’s twice the probability of finding out where the infection originated.

My Communicable Disease and Infection Control Investigator, whom I’ll call Lorna (Public Health officials are squeamish about the use of their real names), called about my diagnosis before my doctor did. The interview lasted an hour and a half. She wanted me to recall every time I’d been out-side during the three weeks before my symptoms first appeared (she was skeptical when I said I take the dog out three times a day; “We don’t have a lawn,” I explained), where I’d travelled in the last ten years, and whether I’d been experiencing periods of confusion or forgetfulness. “What, exactly, qualifies as clinically significant confusion or forgetfulness?” I wanted to know. I’d misplaced my glasses, had to re-read a sentence several times the other day. Was I going to die?

Eventually, yes, but probably not from West Nile. For those who develop the symptoms, effects can range from mild, flu-like illness all the way to meningitis or encephalitis, the latter two most commonly in those over fifty. These can lead to death but rarely do. The North American strain of the virus can also result in a polio-like paralysis. And though there is, as yet, no vaccine, those with a healthy immune system generally make a full recovery.

WNv-triggered hypochondria, however, turned out to be widespread and, in some cases, contagious. Upon disclosing my newsworthy illness, I found that many of my fellow city-dwellers would suddenly develop generalized flu symptoms. It seems we Torontonians are a sick bunch. “So, you should go get tested,” I would advise. “You can’t know if you don’t get the blood test.”

“Oh no, I’m not going to do that,” people would say. An odd, if typical, reaction. It seems most of us are happier not knowing.

A newly released study of a 2002 “WNv hotspot” showed that “virtually all” of the randomly selected respondents knew about the virus and how to protect themselves – 80 percent even felt it was an important issue – though more than half had done nothing to avoid being bitten. The study also showed the community infection rate to be higher than predicted at 3.1 percent (up to 1,219 people in that area alone).

One of the reasons Public Health interviews every known victim is that every bit of new knowledge counts. Currently, scientists are trying to determine whether the virus can be transmitted from mother to fetus, or to a baby through breast milk. My investigator informed me that while I had the anti-bodies, I shouldn’t consider myself protected. It’s even possible that having the antibodies could result in more serious symptoms if you contract West Nile again. No studies prove otherwise.

And while many info sheets tell you that an abnormally swollen bite is reason to get checked out, so is a bite that produces no effect whatsoever. Mosquitoes also seem to be most contagious in the fall, when the majority of us have stopped worrying about them.

Public Health considers my partner and me “a human cluster.” Our neighbourhood, I’ve since learned, is known by the West Nile field team as a “hot zone.” Human cases are poor indicators because we move around so much, but the funky-looking trap they installed in our backyard confirmed the presence of “positive adults” – that’s adult mosquitoes, of course. Never mind the invasion of insects and investigators; I take solace in being part of a long history of humans, mosquitoes, and disease transmission.

Lorna’s last word was: “So you’ll continue to use DEET-based insect repellent, wear light-coloured, high-coverage clothing when outside, rid your property of standing water, and ensure screens fit snugly in your windows and are in good repair?”

“Yes, of course,” said Number 36 sheepishly, gazing out her open window and thinking about how she really oughta fix that hole.