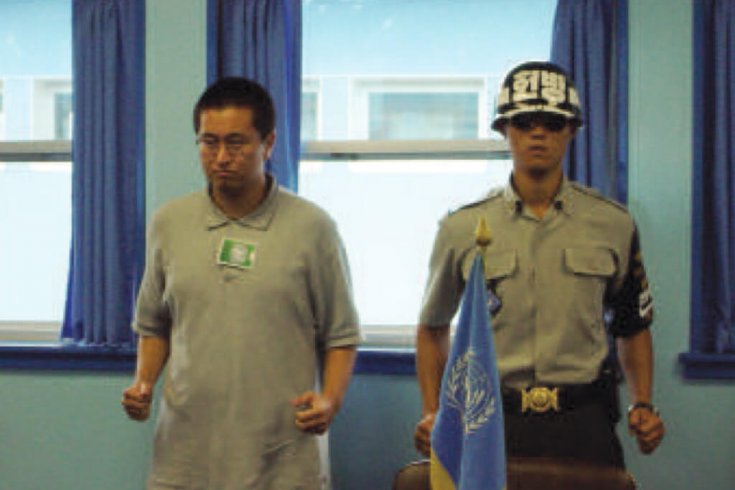 panmunjom—It’s generally well-known that the four-mile wide, 248-kilometre-long Demilitarized Zone (DMZ) that separates the two Koreas is the most fortified border in the world. An estimated one million Korean soldiers, more from the North than the South, and thousands of Americans troops, are posted in the area. What is less well known is that here, less than fifty kilometres from the South Korean capital of Seoul, lies the only section of the DMZ that is not separated by a fence. It’s called the Joint Security Area (JSA). It is eight hundred metres wide and each year, 100,000 visitors take the tour, almost all of them foreigners. (South Koreans have to apply well in advance, undergo background checks, and even then are rarely given access.)

One of the attractions of the JSA is a tree stump, the result of something the Americans called Operation Paul Bunyan. On August 18, 1976, a group of eleven military personnel, South Korean and American, set out to prune a large tree near JSA Checkpoint Three because it was obscuring the view to Checkpoint Five. The group was ambushed by thirty North Korean soldiers. Two Americans died in the incident, beaten to death with pick handles and their own axes. It was the bloodiest attack in the history of the JSA. Operation Paul Bunyan began three days later at 0700. Seventy-six American and South Korean soldiers entered the JSA to cut down the offending tree, supported by more than twenty ground units and air cover that included squadrons of F-4s, F-111s, and B-52s. Though the expected resistance never arrived, the incident left both Koreas on high alert for several weeks. Many South Koreans believe that it was the closest the two countries had come to open conflict since the 1953 Armistice that brought the Korean war to its uneasy halt.

The tension is still there. The day before my visit, shooting had broken out on the DMZ not too far from the JSA. North Koreans in a guard tower had fired rounds on a South Korean guard tower, which returned fire.

Conference Room Two, one of the three rooms that straddle the Military Demarcation Line, which separates North from South, is a small, nondescript place with thin walls. North Korean soldiers peer in through the windows, framed in flimsy blue curtains, to watch the tourists. In the centre of the room is a large wooden table with four oversized and old-fashioned black microphones. The guide tells us, soberly, to watch what we say, since “the North Koreans are listening.” This announcement causes nervous laughter. The room is also where officials from the two sides meet several times a year to discuss, among other things, the peaceful reunification of the two Koreas. It is the only place in the DMZ where you can set foot on North Korean soil without facing repercussions, which can be severe.

The original purpose of the JSA was to provide a peaceful meeting ground where the North and South could resolve their differences. But because of North Korea’s uncooperative nature and the heavy involvement of the UN and U.S., many South Koreans question the JSA’s effectiveness.

Despite the casual atmosphere of the place – with its South Korean-run bar and gift shop – the virtual absence of South Korean tourists and the unsettling presence of North Korean soldiers suggest that peace and reunification are still a long way off. The South Koreans I asked believe the tours are conducted more to provoke the North, and push them further into isolation, than to foster peace. As the memory of the intact country grows dimmer with each passing generation, many South Koreans feel that the time for real reunification is running out. The line that cost more than a million Korean and allied lives to establish remains a hard one to cross.