Orchestral Manoevres in the Dark | The Walrus
Skip to content 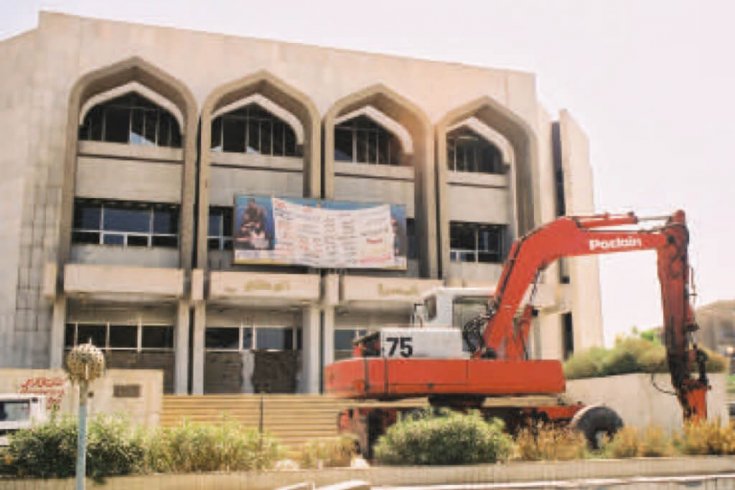 baghdad—Much of life here these days feels like an elaborate dress rehearsal. Everywhere, people seem to long for the real show to begin, whether it be a functioning, Iraqi-run government, reliable electrical service, or simply a sense of safety in the streets.

Survival in Baghdad demands that you fool yourself, that you go about your daily business as normally as possible while remaining numb to the dangers reported later on the nightly news. Everyone tries to keep up appearances; people play their part and deliver their lines on cue to new arrivals—“Welcome in Baghdad” or, “Iraq is very beautiful” or, “We are an old nation; we will survive”—magic incantations that might, if repeated often enough, make them true.

Omran Tamimi is a local poet and playwright who, like many other out-of-work dramatists, hangs out at the National Theatre. Once a showcase of Iraqi culture, the theatre is now a sorry sight, with crumbling pillars and sewage leaking onto its marble floors. In a city where most theatres have been closed because of looting and security problems, the National Theatre has become a kind of drop-in centre. Performances may have been postponed, but at least the doors are open.

Modern Baghdad’s cultural heyday was in the 1970s, when money from the newly nationalized oil industry was being funneled into the arts. Under the UN sanctions in the 1990s, movies from abroad were embargoed, creating a situation that breathed new life into the live theatre scene. Surprisingly, musical comedy emerged as the most popular genre.

Omran’s last play, a comedy about political prisoners, was safely set in the 1920s. It closed a week before the invasion. Now, unlike many of his colleagues, he refuses to cooperate with the new ministry of culture. He finds it hard to extract even the blackest of humour from the current situation. “I’m afraid of whom I might offend,” he explained. “Before, there was only one Saddam. Now there are dozens.”

Inside the National Theatre, actors were rehearsing two different Iraqi interpretations of Chekhov’s The Cherry Orchard. One version ends in a bloody family feud. The other follows a family of musicians who keep practising the same tune over and over again, never getting it quite right. Still, the actors were striving to maintain a sense of normalcy. Facing an empty gallery, they awaited their cues as if playing to a packed house.

Another play in rehearsal, I’m Sorry, Sir, is about a teacher who quits his job when he finds he has no answer for a student who asks, “What is freedom?” The teacher becomes a tea-seller in the market where he befriends an ex-prostitute, an ex-lawyer, and a slick huckster who have all turned to the same trade. Unfortunately, the would-be merchants discover that everyone is selling tea, and no one is buying. It’s a post-Baathist lesson in supply and demand.

A cross town in the Al Addamiya district, where the long-suffering Iraqi National Symphony Orchestra has its headquarters, the musicians remain optimistic. At least one American soldier has joined the orchestra’s ranks and when they meet for their bi-weekly rehearsals, morale is high. I was told that Bizet’s L’Arlesienne was a current favourite. The orchestra bravely played away on their old violin strings, despite anonymous threats, perhaps leveled by fundamentalists offended by the orchestra’s perceived bias toward Western music. They played a concert in late June and are scheduled to tour the United States in December, sponsored by the U.S. State Department and the Kennedy Center.

I went with the symphony’s principal cellist, Karim Wasfi, to seek out a theatre where the orchestra usually rehearses. These days, Wasfi has less time for rehearsals. He’s taken a day job with an American-approved ngo to make ends meet. He’s started to dress like an East L.A. thug—shaved head, “gangsta” chic—and he carries a gun. As our cab pulled up to the theatre, we noticed two of Wasfi’s fellow musicians standing outside the large iron gate, locked with heavy chains. The musicians were talking through the bars with shirtless squatters, the patriarchs of a handful of families who occupy the space when the orchestra isn’t practicing. An old man in a thin white undershirt was shaking his head and wagging an index finger; the musicians were frantically gesturing back at him.

Karim waved the driver on. “There won’t be any rehearsal tonight,” he said.

At a wedding I attended a few days later in the Palestine Hotel an imposing, modernist tower surrounded by American tanks and barbed wire a potent version of “Besame Mucho” pulsed through the night air. In the courtyard, tired-looking bridesmaids in lacy green and pink outfits and young girls in white starched pinafores danced a lively Iraqi folk dance called the chobi. Occasionally, the D.J. would play a Céline Dion track. Militia men and feral cats wandered in and out of the scene.

Inevitably, the electricity went off, but the bridesmaids continued to dance, their hips and arms swaying in serpentine movements. As they moved in the dark, they looked as though they might be auditioning for a pop music video. But perhaps they, too, were just rehearsing for a normal life.