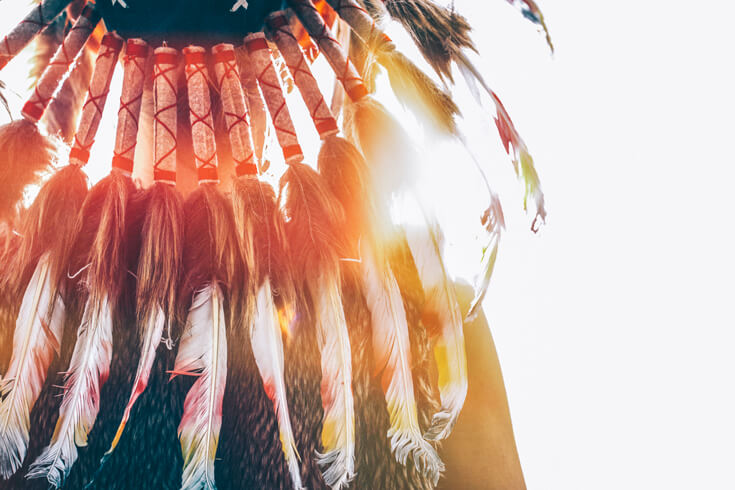 This Halloween, I want to give some advice to white settlers situated in what is currently called North America: be more creative. Year after year, Halloween is a time when settlers receive carte blanche to parade their ignorance and dress as whomever or whatever they’d like—even if, historically, they and their ancestors have prohibited others from wearing these same pieces of clothing or regalia. A cursory Google search reveals several examples: there’s the “Pocahottie,” the “Sexy Eskimo,” or, for the little one in your life, the “Indian Brave.” Frankly, it’s tiring, and Indigenous peoples have told you again and again why wearing these costumes is not okay, yet the message never seems to land.

When I hear about white settlers deciding to dress as Indigenous peoples for Halloween, a common refrain is, “Relax—it’s just a costume.” There seems to be no end to the pro–cultural appropriation crowd masquerading as “free expression” advocates to condone these ignorant acts. The fact of the matter is that these are not just costumes: for many Indigenous communities, the sloppy, slapdash “regalia” you dress in threatens to cheapen our own regalia. Not only this, but at least in the Canadian context, Indigenous peoples were strictly prohibited from wearing our ceremonial clothing through an amendment to the Indian Act that stayed in effect until 1951. And, even though that ban has since been lifted, the Indian Act still regulates the lives of many communities in Canada today.

I’ve also heard settlers say they are “honouring” Indigenous peoples by wearing cheap, knock-off versions of the regalia that their legal system long prohibited us from wearing. Meanwhile, they do not know whose ancestral territories they reside in. This exemplifies the larger issues of costumes and cultural appropriation. Put simply, many settlers want to dress as Indigenous peoples without knowing the struggles we have experienced in both the past and present—often at their hands or those of their ancestors. And, rather than use this time of year as a potential moment of self-reflection, they often instead insist it is an infringement on their personal rights when people challenge their presumption to dress however they wish and offend whomever they choose.

As I’ve said, my suggestion is simple: be more creative. If white settlers are the putative historical epicentre of “culture” and other forms of knowledge production (as Eurocentric notions of the Enlightenment contend that you are), then surely there are many other, more creative, less offensive costumes you could wear this Halloween. Perhaps Gritty, the mascot for the Philadelphia Flyers? Or one of the terrifying puppets from The Dark Crystal: Age of Resistance? Whatever these potential new costume ideas might be, what you should not do is continue to publicly proliferate a caricatured and racist image of Indigenous peoples.

It should be clear where I’m heading with this, but if not, let me be a bit more direct: your Halloween headdress isn’t interesting, and it probably signals that neither are you. To those of you contemplating a “Pocahottie” or “Sexy Eskimo” costume: you can do better. Reading this might be one step among many in deciding how you will try to do better—how you might begin to honour the relational obligations you have to Indigenous peoples. The reality is that there are multiple ways in which you can honour Indigenous peoples that we might actually recognize as honour.

You might consider supporting Indigenous communities when private corporations and public institutions try to engage in resource-extraction efforts on our ancestral homelands. You can do this by holding your politicians accountable, for example, or by paying the tickets or fines distributed to frontline defenders. Or you might become more involved in the issue of murdered and missing Indigenous women, girls, and Two-Spirit peoples. Depending where you are located, for instance, there might be an annual march that you can support either monetarily or by your bodily presence. At the very least, you could simply learn the names of the communities and nations whose territories you currently occupy and act ethically in relation to these peoples.

Sure, there might be Indigenous individuals who do not care or are ambivalent about you doing your best Grey Owl impersonation, but this does not give you a free pass. Our ability to disagree with one another demonstrates the diversity and complexity of Indigenous communities, something one-dimensional popular representations of Indigeneity fail at spectacularly. And yes, I know it can be hard to grasp the complex personhood of Indigenous communities, especially when television, film, and the fashion industry encourage the opposite. (Johnny Depp is a repeat offender here.) But that’s hardly an excuse either. Now is a good time to start learning.

If there was ever a time to be scared or uncomfortable, then Halloween is that time. Instead of being an occasion where your sole preoccupation is getting inebriated or collecting candy, maybe it can be a chance for genuine engagement with the actual, messy reality of this holiday and the costumes it inspires. Maybe it can be a time to grapple with and confront one’s own privilege and the violence that cultural appropriation can and does do. I encourage all of you to be uncomfortable when choosing costumes for this fall celebration. And I encourage you to be uncomfortable when calling out your friends for doing the same. How scary it is to attempt to be creative, yet how rewarding it could be.

Dallas Hunt is Cree and a member of Wapsewsipi (Swan River First Nation) in Treaty 8 territory in Northern Alberta, Canada. He has had creative and critical work published in the Malahat Review, Arc Poetry, Canadian Literature, and the American Indian Culture and Research Journal.