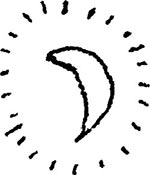 Carl the cremator lived next door—Carl and his big wife, Brenda, who was allergic to the sun, the outdoors, anything at all that required getting off the couch. We would tiptoe past her wheezing bulk in the dark interior of the living room after school, bee-lining for a kitchen full of substances considered illegal in my house.

“She’s not my real mother,” Jason would lisp through the space where his two front teeth used to be.

“So where’s your real mother, then? ” I’d ask, dipping a doughy ball of crushed Wonder Bread into a tub of Cool Whip.

At this, he would only shrug and ask if I wanted chocolate sauce. Then we’d go watch television.

I told my parents nothing of the world next door. They were hippies: freaks fashioning lives without television or sugar or meat, keen on resolving disputes (not infrequent) with a crystal hanging between them to deflect negative energy. I had not brought anyone home since the humiliation of my seventh birthday party, where my mother had led my classmates and me through a game called Getting to Know Our Bodies. I didn’t have any friends left to bring home. Then there was Jason: next door, a year younger, a boy, and from a different school, but I could hardly afford to be choosy.

Jason led me to the cemetery. We scrambled over the wall at the end of his yard. We spent the summer picking flowers, offering each other bouquets, pretending we were drowning until thrown a life-saving wreath. We played hide-and-seek and hollered at each other from behind gravestones. We didn’t know about bowed heads and euphemisms and hushed tones.

But then came the summer of fourth grade. We were standing behind a crypt when Jason told me he’d show me his thing if I showed him mine. I recoiled at his and he seemed unimpressed by mine and after that, well, we stopped hopping the cemetery wall and the summer was lonely and weird.

We still weren’t talking a year later when the woman he said wasn’t his real mother died. In the awkward silence that had grown between us, I hadn’t known she was really sick, had cancer, and he didn’t know that my mother had snapped the talking stick in half over her knee and my father had gone off to an ashram. There was bologna in our fridge now.

On the first anniversary of Brenda’s death, my mother took Carl a cherry cheesecake. I watched while Carl stood in the doorway and thanked her and asked if she might like a tour of the crematorium. Perhaps because she was lonely, she said yes, but not before going home and chucking the crystal into the garbage bin.

While she was out I threw out the toxic waste that now filled the refrigerator, but not before salvaging the crystal from its nest of wet coffee grounds and stuffing it under my pillow. I was grateful for its hard edges against my cheek.

Every Friday night after that Mum wore lipstick and disappeared with Carl. I sulked in front of a television resurrected from the basement and had permission to eat whatever I wanted, which made me want to eat nothing at all. I turned up the volume to block out the sound of Jason in his driveway whacking a tennis ball against the crumbling brick side of his house with his palm.

My mother asked me why we weren’t friends anymore.

“Because he showed me his thing,” I said spitefully.

“Well,” she smiled sympathetically, “it’s perfectly normal to want to explore your bodies.”

“Maybe I don’t want normal! Maybe I want things to be like they were before!” I shouted. Everything was wrong. Dad was gone, my feet were giant, and I was afraid of the cemetery now because I knew someone who had died on the couch next door. It was like there were suddenly dead people on this side of the cemetery wall; everything was flipped around.

The following Friday evening I stared out the kitchen window and watched Jason heave his not-inconsiderable bulk over the cemetery wall. He was clutching a plastic bag in one hand. I followed, hoisted myself up and over, and found Jason crouched by his mother’s grave, planting flowers where we’d used to rip them from the ground.

“You could bury this,” I said hesitantly, hand outstretched.

He took the crystal, rolled it between his palms.

“No, it’s good,” he said, illuminating it with his glow-in-the-dark watch. He pushed the crystal into the ground.