What’s the Yiddish Word for Comeback? | The Walrus
Skip to content 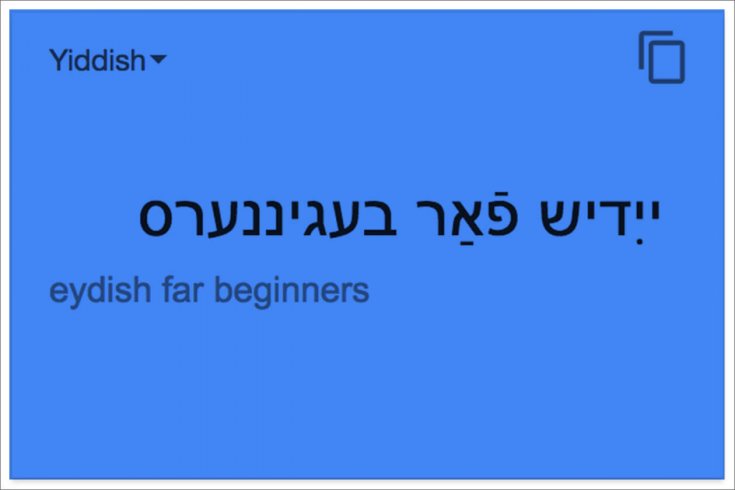 Sheila Witt, my Yiddish teacher for the last two months, has a mantra or, if you prefer, shtick. She routinely responds to complaints about the idiosyncrasies of the language she loves—”Why are questions so often answered with questions?” “Why are the letters daled, or d, and reysh, or r, virtually indistinguishable?”— with: “Don’t ask why. It just is!”

Witt grew up speaking Yiddish and has taught it for thirty-five years in Montreal’s Jewish private school system. She knows the language can be frustrating, especially for beginners.

This may be why she treats the handful of us who meet weekly in the basement of the Montreal Jewish Public Library with inordinate care. Ask and she’ll show up early for private tutoring. Miss a class and she’ll wonder where you are. Part bubby, part cheerleader, she’s invested in our success, however modestly success is defined when it comes to a 1,000-year-old language that, let’s face it, has seen better days.

Still, Yiddish, a mishmash of European languages—throw in Latin and American English, too—is resilient. It survived the Holocaust, barely, and assimilated itself into popular culture because of its knack for being all things to all people (who doesn’t know what shtick means?). My classmates prove the point.

Thomas Lafontaine is thirty-two, Quebecois, and taking Yiddish because of his fondness for “humour and anarchism,” and because he wanted to know more about the “huge part Jewish immigrants played in radical social struggles in Montreal.” For an anarchist, he’s surprisingly considerate. He missed a class recently and wrote Witt ahead of time to say he couldn’t make it. Rather than explain, he texted, in transliterated Yiddish, the phrase: “Freg nit.” Witt read us the message a few times—it means “don’t ask”—and was “kvelling.” Roughly translated, kvell is excessive pride—the kind you’d take in a perfectly chosen Yiddish text from the francophone teacher’s pet.

Sharon McCallan, sixty-eight, isn’t Jewish either, but she worked as a designer in Montreal’s garment, or shmatte, business in the 1970s. Taking Yiddish is a nostalgic gesture for her. “Everyone’s gone,” she says. “I miss that world.”

Unlike my classmates, I don’t know what I want from my grandparents’ language. Mainly, I’m trying to figure out whether it has a claim on me or I have a claim on it—or neither. While it’s true I’ve always wanted to learn Yiddish, it’s equally true I never expected I would. Now that I am, I recognize its self-deprecating tone in the jokes I tell, its ironic view of the world in my own. Now that Yiddish is getting under my skin, I’m learning it’s always been there.

Rebecca Margolis, an associate professor in the Vered Jewish Canadian Studies Program at the University of Ottawa, was eighteen when she began seriously studying Yiddish. That’s also when she first got “the look.” Typically a raised eyebrow, it appeared whenever she told an older person what she was doing. Invariably, it was accompanied by a question. Something like, “Why even try?”

“I experienced this as an undergraduate, and then in graduate school,” Margolis, forty-four, says. “I found that pre–World War II Jews, those who came after the Holocaust, would say, ‘You can’t possibly be authentic.’” The proprietary attitude is understandable. “Last is a hard thing to be. But it’s also something of a choice to be last,” Margolis explains. “My generation doesn’t have the sense there’s a right and wrong way to speak Yiddish.” Instead, she sees today’s interest in Yiddish and its culture expanding in a variety of directions, many of them unexpected. Margolis recently wrote an article on the re-emergence of Yiddish film for In Geveb, an online journal of Yiddish Studies, and focused on the comic web series Yidlife Crisis.

Now in its third season, Yidlife Crisis, co-created by and co-starring Montrealers Eli Batalion and Jamie Elman, has received some two million views on YouTube and has been dubbed “the first Yiddish sitcom.” Here, Margolis adds, “are these two young comedians saying, ‘F-this! We’re just going to take Yiddish and do what we want with it.’”

They’re not alone. At last year’s Association of Jewish Studies Conference, one quarter of the topics—about fifty panels and papers—were “engaged with Yiddish in some way,” according to Madeleine Cohen, editor of In Geveb. This year, Menashe, a film about a Hasidic widower in Brooklyn, premiered at the 66th Berlin International Film Festival, a first for a Yiddish-language feature.

Meanwhile, klezmer music is growing more popular, and Hasidic families, where Yiddish remains the mama-loshen or mother tongue to new generations, are becoming more populous. There are also Yiddish summer study programs all over the world, attracting Jews and non-Jews. That includes the Yiddish Summer Institute, a program Margolis just started in Ottawa and where I can become, she promises, “fluent in six weeks.” But even Margolis, at work on a book called A Dying Language Lives: Yiddish Transmission in Canada after the Holocaust, is cautious. She immediately takes back the word “explosion”—“I don’t know if I want to use that”—when discussing revivals and renaissances. With Yiddish, two realities exist concurrently. It’s perpetually on the verge of a comeback and always on the verge of extinction.

Threatened languages survive top down. In recent years, Wales instituted publicly funded programs to make learning basic Welsh in schools compulsory. In the 1970s, Quebeckers, deeming French at risk in North America, safeguarded their language with legislation. In 1948, Hebrew became the official language of the new state of Israel, rescuing an ancient tongue from some 2,000 years of oblivion.

Yiddish, typically, has had no such luck. In fact, it was passed over in Israel in favour of Hebrew. Instead, it has survived by making the best of a bad situation. In his 1978 Nobel Prize lecture, the Yiddish writer Isaac Bashevis Singer praised Yiddish for being “a language of exile, without a land, without frontiers, not supported by any government . . . the idiom of frightened and hopeful Humanity.”

There’s still “no body overseeing what [Yiddish and Yiddish culture] look like . . . no epicentre,” Margolis says. Invariably, questions about its future prompt more questions. “Who owns Yiddish? Who does it belong to?” Margolis asks. “That last generation of speakers? The Yidlife guys? The Hasidim? Someone taking a course, like you? Or does everyone have a piece?”

According to Schulman, the mistake beginners like me make is thinking of Yiddish as some kind of lost or buried treasure. “Clearly, the 20th century hasn’t been kind to Yiddish or the people who spoke it,” Schulman says. “But all those traditions—language, music, folklore, food—are still there. I wouldn’t say Yiddish was gone and now it’s coming back. Yiddish has always been there.”

The poster boy for Jewish ambivalence, Franz Kafka, once said, “I would tell you, ladies and gentlemen, how much better you understand Yiddish than you suppose.” In case he’s wrong, though, I’m considering Margolis’s offer to make me fluent this summer. I’ve also signed up for ten more weeks with Witt. Why? The only response is, of course, another question: Why not?

This article was written with the support of a grant from the Foundation for Yiddish Culture.

Joel Yanofsky is the author of Bad Animals: A Father's Accidental Education in Autism.