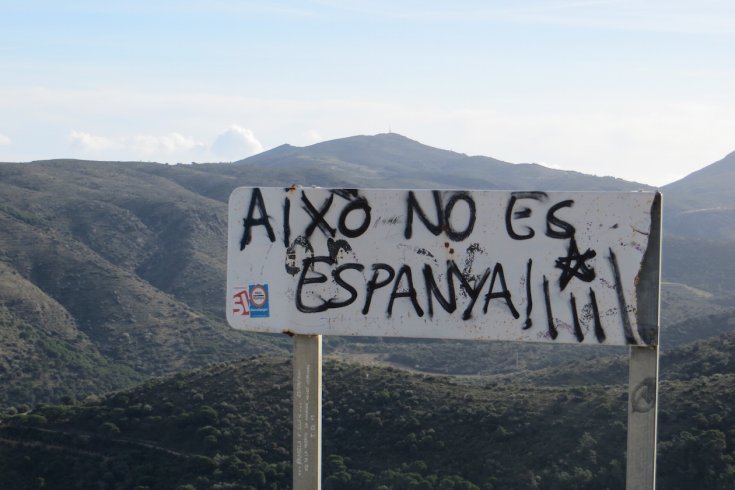 Graffiti in Catalonia reads "This is not Spain." Photograph by Bertran De Born.

On October 3, 2017, King Felipe VI of Spain made a televised national address. Two days earlier, Spanish police had intervened in an unsanctioned independence referendum in Catalonia. Cops had confiscated ballot boxes, clubbed elderly voters, and attacked Catalonian firefighters. The stability Spain had enjoyed since 1978, when a new constitution was introduced after the death of dictator General Francisco Franco, in 1975, was at risk.

For any Canadian who grew up during our constitutional crises of the 1970s and 1980s, the king’s speech brought back memories of Prime Minister Pierre Trudeau making one of his televised national addresses that began with the words “my fellow Canadians.” The current crisis in Spain is a reminder of our recent past and hints at some of the missteps Canada avoided to reach a period of relative constitutional peace.

The forty-nine-year-old king refused to acknowledge the abuses committed by the Spanish police during the referendum. Instead, he accused Catalonians of undermining Spain’s democracy with “inadmissible disloyalty” to the republic. As King Felipe spoke, the camera panned around his office, decorated with a portrait of his Bourbon ancestor King Carlos III. While Spanish-speaking viewers likely perceived nothing unusual in the presence of the portrait, Catalonians saw a message. In 1768, Carlos III decreed it a crime to publish books or teach classes in the Catalan language. In the eyes of Catalonian viewers, King Felipe was flaunting his descent from one of the oppressors of their culture.

If King Felipe VI was hoping Catalonian separatists would back down, it didn’t work. On October 10, in the wake of the flawed referendum’s record-high 90 percent support for a separate state, the Catalonian government issued a declaration of independence, then immediately suspended it and asked for negotiations with Madrid, probably in order to obtain more favourable conditions for remaining in Spain. Refusing to accept this compromise, Spain’s confrontational prime minister, Mariano Rajoy, charged Catalonian leaders with treason, fired Catalonia’s government, and imposed direct rule from Madrid.

Today, Catalonians find themselves isolated. Geography and history have made this corner of northeastern Spain feel close to the rest of Europe, yet the European Union hasn’t welcomed efforts to create an independent Catalonia. Territorial integrity, a central principle of international law, means that, though new countries do sometimes appear on the map—most recently, tiny Montenegro, in former Yugoslavia, in 2006, and South Sudan in 2011—most secessionist movements receive a cold shoulder from the global community. European Council president Donald Tusk reiterated that the EU recognized only the government in Madrid. Canadian foreign affairs minister Chrystia Freeland, like Prime Minister Justin Trudeau, emphasized that Canada recognizes and supports a united Spain.

Globalization has even sapped the eagerness of some international activists to promote national independence movements abroad. The Catalonians received support from Basque separatists as well as Scottish National Party leader and first minister of Scotland Nicola Sturgeon. But when Parti Québécois leader Jean-François Lisée tried to make the Catalonian struggle a rallying cry in Quebec, not even his own supporters showed much enthusiasm. Even so, the crisis in Spain is far from over, and Catalonia may yet become Europe’s newest nation-state.

The conflict over Catalonia is part of a pattern that that began when the Catalonians integrated into Spain through a twelfth-century dynastic marriage, with the understanding that their language, and their local legislative assemblies, known as “courts,” would be safeguarded. For centuries, Catalonia has regained autonomy only to lose it again. Most dramatically, when General Franco won the Spanish Civil War, he had the president of Catalonia’s regional parliament executed, and he suppressed public use of the Catalan language. Only in the late 1970s, after Franco’s death, was Catalan spoken again in the streets of Barcelona. Blame for the current resurgence of the Catalonian independence movement almost certainly lies with Rajoy’s governing Popular Party. The party provoked a constitutional crisis by attempting to reverse the 2006 Statute of Autonomy—a document that defined the relationship between Catalonia’s institutions and the 1978 constitution. In 2010, Madrid judges complied with the Popular Party’s demands to refuse to call Catalonia a “nation” and to limit the region’s control over tax revenue, and 1 million Catalans took to the streets in protest.

The conflict mirrors tensions evident in other countries, including Canada. Like the Québécois, the Catalonians speak a different language than the rest of their compatriots and harbour an independence movement that occasionally receives the support of over 40 percent of the population yet has never convinced a decisive majority to follow it into a new country.

But if Catalonia is Spain’s Quebec, it is also the Spanish-speaking world’s Alberta. If you’re young and unemployed in Spain’s poor southern regions or in the Dominican Republic, Peru, or Argentina, you probably believe a job awaits you in Barcelona. More economically successful than the rest of Spain, Catalonia attributes its wealth to a superior civilization. Catalonia’s cultural contradictions flow from that illusion: the conviction that it possesses a unique social enlightenment coexists with an impatience with southern layabouts who squander its tax money. At unexpected moments, this arrogance yields to an inferiority complex before Castilian Spaniards, whose language is spoken by over 400 million people, while only 7 million—9 million if Valencia, farther south, is included—speak Catalan.

If Catalonia is Spain’s Quebec, then Barcelona is its Montreal—at once the culture’s capital and a city where its distinctive language can never be secure. It is a city where cultural identity is imagined in varied ways in two different languages. Mordecai Richler’s St. Urbain Street and Yves Beauchemin’s Plateau Mont-Royal are geographically contiguous yet incompatible as imaginative territories. By the same token, Mercè Rodoreda’s interiorized Catalan-language feminist fiction references the same streets as Eduardo Mendoza’s Spanish-language historical blockbusters, but makes them into a different place, reflecting a distinctive conception of history.

The Québécois have found much more success in giving Montreal “a French face” than Catalonians have had in making Barcelona sound like a Catalonian city. Though signs exhort citizens to speak Catalan in public (one poster shows a couple necking, accompanied by the slogan Utiliza la llengua!, Use your tongue!), the tourism industry demands services in English, while a growing portion of the labour pool consists of young, Spanish-speaking Latin Americans. It is no coincidence that the star speaker at the two huge anti-independence rallies that took place in October was the Madrid-based Peruvian novelist and 2010 Nobel laureate Mario Vargas Llosa who lived in Barcelona in the 1960s, when it was a Spanish-speaking city. In his first speech, Vargas Llosa alluded to the many Peruvians whose economic survival depends on being able to work in a united Spain.

Yet for some Catalonians, the sound of Latin American construction workers being served lunch in broken Spanish or English by Urdu-speaking fast-food workers remains a threat. The children of immigrants are required to attend school in Catalan. But since all Catalonians are bilingual in Spanish, Catalonia’s intellectual elite cannot—as late twentieth-century Québécois intellectuals did—present themselves as the voice of an oppressed unilingual folk culture. Much of the urban Catalonian working class is proud to speak Spanish and opposes independence, in opposition to their separatist-leaning middle-class neighbours.

Nationalist intellectuals and their allies assert that an independent Catalonia would be a more progressive place than Spain. According to Peter Bush, a British literary translator who lived in Barcelona for more than a decade and is married to Catalonian writer Teresa Solana, Catalonians “wish to build a more democratic, more feminist, more plural, and inclusive republic.” Carles Puigdemont, the president of Catalonia’s now closed government, is a political centrist, an ideological counterpart of French president Emmanuel Macron rather than of Europe’s right-wing anti-immigrant parties. “We’re post-modern nationalists,” a Catalonian friend who has worked in the cultural bureaucracy told me. “So far as we’re concerned, if you speak Catalan, you are Catalan.” Like Canadian multiculturalism, and in contrast to the often racially based politics elsewhere in Europe, Catalonian nationalism asserts that, regardless of your origins, as long as you learn the Catalan language, you’re part of the nation.

The cultural dynamics change in rural Catalonia. An hour inland from Barcelona, the towns along the railway line have low-rise apartment blocks where large immigrant families that can’t afford the capital’s high rents cram into tiny apartments. The men ride the train into Barcelona to look for work. If you get off here and drive up into the hills, you enter the Catalonian heartland: a craggy landscape of new bungalows set among rocky outcroppings and ancient villages in high valleys, a place that feels both domesticated and wild, where each bungalow is home to two or three wolfhound-sized dogs kept to ward off the wild boars that leave cleft-shaped tracks in the red earth. The landscape’s beauty is enhanced by arduously maintained small farms and blemished by the ugly quarries of small-scale mining. Up here, the wind is cold even under a hot sun; fog can smother the uplands in a matter of minutes. You can go for days without hearing any language but Catalan. Rural Catalonians regard all Spaniards as franquistas, followers of General Franco: it feels as though the Spanish Civil War ended ten minutes ago. In inland cities, such as Manressa, conversation on the streets is in Catalan.

A few years ago, I spent a night in ferocious political discussion with a nationalistic Catalonian family in a hilltop bungalow. They felt themselves as far away from being Spaniards as 1970s Quebec nationalists felt from being Canadians. But they are only one element in a complex political equation that ensures that any resolution of the Catalonian conundrum will anger nearly half of the region’s population and sow the seeds of future discord. Looking back on that argument, all I know for certain is that in demanding loyalty to the Spanish crown, King Felipe VI and Prime Minister Rajoy are asking many Catalonians to make the one concession to which they will never submit.

Stephen Henighan’s sixth novel, The World of After, will be published in 2021.
Bertran De Born