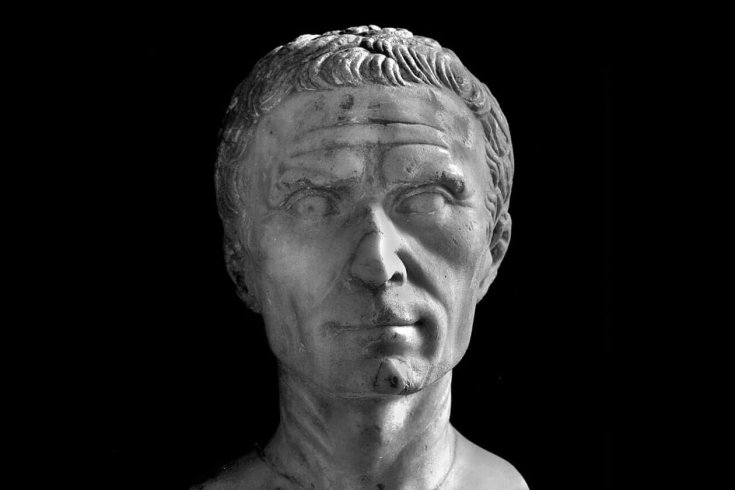 A bust thought to be of Gaius Julius Caesar.

Last week, the New York Public Theater lost Delta Airlines and Bank of America as sponsors because its modern-dress production of Julius Caesar in Central Park associates the historical title character with the current President of the United States. In a statement, Delta asserted that the production’s approach to the assassination was too “graphic”, saying that it “crossed the line on the standards of good taste.” Bank of America withdrew their support because the company “chose to present ‘Julius Caesar’ in a way that was intended to provoke and offend.”

The righteous indignation over the 418-year-old high school staple continued through the weekend. Last Friday, the production was briefly interrupted when a right-wing provocateur stormed the stage, shouting, “This is political violence against the right!” Since then, Shakespeare companies around the country have been inundated with threats and hate mail from confused right-wing trolls eagerly jumping on an anti-Shakespeare, and anti-theatre, bandwagon.

Like many of my fellow Shakespeare professors and theatre practitioners following the story, I’m bewildered by the way that objections to the Public Theater’s interpretation of Julius Caesar have focused selectively on the assassination, a single scene at the midpoint of the play, disregarding the way that the war-torn events of act 4 and 5 serve to undermine the conspirators’ apparent triumph over tyranny. If Shakespeare had ended the play with the title character’s brutal and public death, there would be some justification for claims that Julius Caesar glorifies violence against political leaders. But it doesn’t—Shakespeare’s Rome, much like the historical Rome, descends into civil war and bloodshed, and one by one the conspirators themselves are captured, murdered, or driven to suicide. As the Public Theatre pointed out, “Shakespeare’s play, and our production, make the opposite point: those who attempt to defend democracy by undemocratic means pay a terrible price and destroy the very thing they are fighting to save.”

But the play goes even further, making a larger comment about the nature of propaganda and the limitations of political theatre. What makes outraged objections to the Public Theater’s performance particularly absurd is that, regardless of the nuances of any particular production, the text of Shakespeare’s Julius Caesar consistently refuses to allow a stable interpretation of its images. In nearly every scene of the play, characters bear witness to events that they do not know how to read. What should the conspirators make of the spectacular thunderstorm that accompanies their assassination plans? How should Caesar take the Soothsayer’s vague warning to “Beware the ides of March”? What is the meaning of Calpurnia’s dream that Caesar’s statue “ran pure blood”? Calpurnia convinces Caesar, already worried about a sacrificed beast without entrails, that her dream is a warning: “When beggars die there are no comets seen, / The heavens themselves blaze forth the death of princes.”

But a few minutes later Decius quickly convinces Caesar otherwise: “this dream is all amiss interpreted.” Caesar’s bleeding statue represents life, Decius says, and “from you great Rome shall suck / Reviving blood.” Decius’s flattering interpretation is enough to get Caesar through the Senate house doors to meet his particularly “graphic” fate. Yet attentive readers of Julius Caesar may recall that on the eve of the assassination, the conspirators cannot even agree on the direction of the sunrise.

This interpretive instability has led to Julius Caesar being readily appropriated for a variety of purposes by both the left and the right. In his most strident condemnation of McCarthyism, American broadcaster Edward R. Murrow quoted Cassius—“The fault, dear Brutus, is not in our stars, but in ourselves”—as he urged his viewers to oppose McCarthy’s anti-communist witch hunt. Benito Mussolini idolized the historical Caesar, yet he loved Shakespeare’s play so much that more than forty new Italian editions of Julius Caesar appeared during his twenty-year fascist rule. Friedrich Nietzsche may be a particular favourite of the alt-right figurehead Richard Spencer, but Nietzsche also loved Shakespeare’s play despite the assassination of the play’s hero. Nietzsche heralded Caesar as an über-mensch, and “the ornament of the world,” thus making the decision of Shakespeare’s Brutus to kill Caesar in defence of political freedom all the more impressive: “Independence of soul—that is the question at issue!” And most famously, five months after he performed Julius Caesar at New York City’s Winter Garden Theatre with his brother, John Wilkes Booth shot Abraham Lincoln, exclaiming “Thus always to tyrants” in Latin.

Audiences see in Julius Caesar the political message that they most desire, whether it is the story of a great man torn down by envious detractors, a stalwart defence of republicanism, or a morality tale about the fickleness of public opinion and the dangers of democracy.

This is by design. Even in 1599, Shakespeare, for his part, was clearly aware that he was producing something that could be seen as propaganda. Standing over the corpse of Caesar immediately after the assassination, Brutus invites his fellow conspirators to “Stoop…and … bathe [their] hands in Caesar’s blood” so that the Roman public can see the evidence of red republican valour on their bodies and on their swords. Cassius quickly recognizes that this bloody activity is an act of political theatre. And as a performative act, Caesar’s assassination by patriots can be witnessed again, and again, not just for the Roman age, or for Shakespeare’s, but for all time. Cassius asks:

How many ages hence
Shall this our lofty scene be acted over,
In states unborn and accents yet unknown?

Brutus replies: “How many times shall Caesar bleed in sport?” Shakespeare’s question is ironic—as it is asked during a performance of Julius Caesar, the audience’s answer is always “at least once more.”

Though Brutus and Cassius wish to celebrate their actions as a marker of their civic virtue by dipping their hands in Caesar’s blood, the play repeatedly warns its audiences that human beings are notoriously bad at reading symbolism. “Men may construe things after their fashion,” Cicero muses, “Clean from the purpose of the things themselves.” (He’s dead by act 4.)

In assuming that their bloody hands will make their intentions clear to the public, Brutus and Cassius think that they can control the meaning of Caesar’s assassination and the meaning of their role in history. Corporate communications professionals likewise struggle to control the vicissitudes of public opinion, but directors and actors know that no one has full control over the way they are perceived and imagined by others. On this matter, Shakespeare’s slipperiest political play is crystal clear.