Why Is No One Talking About Hospital-Acquired Delirium? | The Walrus
Skip to content 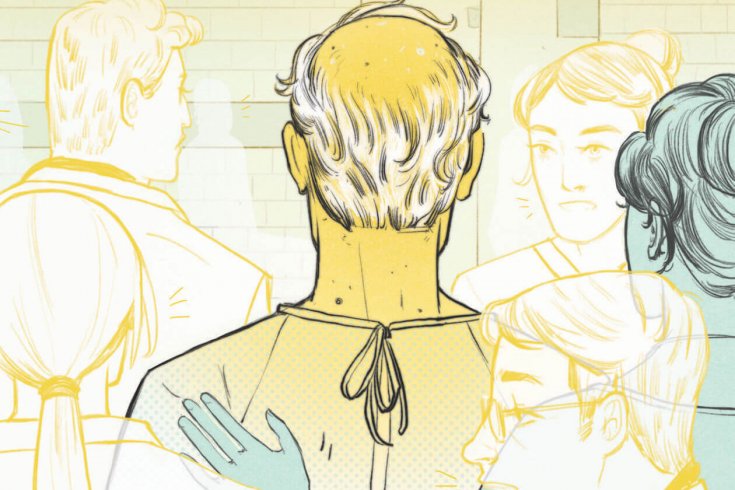 At eighty-three years old, Kenneth Marsden, a retired carpenter, had the mind of a Jeopardy! champion. He could finish a crossword puzzle in half an hour and recite, from memory, the names of obscure towns from his childhood in England. “I swear he’d win that show if he was a contestant,” says his daughter Dawn Clarke. That’s why it worried her when, after a short hospital stay, her father took all day to complete the Hamilton Spectator crossword.

One morning in February, Marsden was watching television in his bedroom when his nose began to bleed. “It was gushing,” Clarke says. “There was blood all over.” Hours later, Marsden sat with his family in a small beige room at St.Joseph’s Healthcare Hamilton, a stained cloth pressed to his face, waiting to see a doctor. Clarke and her mother, Rose, went searching for coffee—and when they returned, Marsden was sitting on the bed, crying. A doctor had come in and wedged what looked like a giant tampon up his nostril. “My dad was in so much pain. He was terrified,” Clarke says. Another doctor later cauterized a ruptured vessel in Marsden’s nose.

Marsden didn’t get much sleep at the hospital over the next few days (nurses woke him every three hours to check his vital signs), and he didn’t eat. He was disturbed by the noise, the lights, the constant comings and goings, and he worried incessantly that the bleeding would return. He was sent home on a Thursday night. But barely forty-eight hours later, his wife called Clarke, distraught. Marsden had been up since 4a.m. He was confused and restless, pacing around in his underwear. Clarke rushed to her parents’ home and called 911. As the family waited for an ambulance, Marsden began to hallucinate that he saw writing on the blank television screen.

Back in the ER, Marsden became combative. He swore at attendants and spat out his blood-pressure pills. Doctors determined that Marsden had a magnesium deficiency, possibly the cause of the initial nosebleed, and they prescribed supplements. Clarke asked to have her father discharged a few days later—she could tell he wasn’t fully recovering at the hospital. At a follow-up appointment weeks later, the family learned that Marsden’s confusion and mood swings had had nothing to do with the reason for his nosebleed. He was diagnosed with hospital-acquired delirium.

“As critical-care providers, we probably generate more cases of cognitive impairment than occur naturally,” says Gordon Boyd, a neurologist and clinician-scientist at Queen’s University. Every year, hundreds of thousands of patients leave Canadian hospitals with a newly acquired mental disorder caused in large part by inadequate care. Their broken bones and infections are treated, but they develop shorter attention spans, slurred speech, confusion, and hallucinations. It can happen to anyone, anywhere: there’s the eighty-seven-year-old woman from rural Ontario who broke her hip and then forgot why she was in the hospital; the sixty-nine-year-old endocrinologist from Tennessee who was admitted for an infection and left unable to remember where he lived; the thirty-seven-year-old Chicago man with a pancreatic disorder who hallucinated that he was burning alive in his room.

In 2016, Kumar Dharmarajan, a professor at the Yale School of Medicine, analyzed data from a clinical trial involving 469 elderly patients in Connecticut. Fifteen percent developed delirium during their hospital stays. Those patients also had a significantly increased risk of dying within ninety days of their admission—in part because of poor nutrition, disturbed sleep, and the use of restraining devices (“A catheter isn’t meant to be a restraint, but accomplishes the same purpose,” Dharmarajan says).

Despite its prevalence, delirium remains under-recognized and under-diagnosed. “Health care providers are trained to focus on the condition that resulted in hospitalization, not on the experience of the person while they’re there,” says Dharmarajan. The syndrome was first identified in the 1960s, and it has been called by various names since then. But symptoms in patients today are still mistaken as everyday signs of aging. And since most of those affected are seniors, their complaints are often dismissed. Delirium may look like dementia, but delirium is an acute confused state, whereas dementia is a chronic condition characterized by memory loss. Most significant, delirium usually has a human cause—which means it could, in theory, be prevented.

Boyd says hospitals are faced with a public-health crisis featuring a condition that triggers many long-term mental health problems. Then there are the associated costs, estimated to be in the billions, since patients with delirium require more medical services and follow-up care—a situation that will only worsen as lifespans lengthen and seniors account for an increasingly large part of the population (20 percent by 2024). Canada’s health care is hospital-centric: it revolves around the emergency room. Not only are seniors admitted more than any other age group, they also stay longer and use more resources while they’re there. Their time in hospital increases their susceptibility to delirium, which then makes it more likely that they’ll need to come back. It’s a devastating cycle: in effect, our health care system is working against itself.

After Marsden returned home, his appetite deteriorated; some days, he refused to eat altogether. He eventually stopped wanting to get dressed in the morning, stopped getting out of bed. Four months after his diagnosis, he was back in the hospital with shortness of breath. Once a patient has experienced delirium, they’re vulnerable for the rest of their lives, says Joye St. Onge, a doctor at St. Joseph’s. “I’ve seen people get a cold and become delirious again.” A study in 2013 found that 74 percent of adults admitted to the medical or surgical intensive care unit of a medical centre and hospital in Nashville developed delirium during their stay. One year later, two-thirds of the patients showed symptoms of long-term cognitive impairment similar to those of traumatic brain injury or mild Alzheimer’s.

Most Canadian hospitals have been slow to act, and there are no universal guidelines for prevention. Dharmarajan thinks institutions should model themselves after patient-centric children’s hospitals, where positive and less disruptive environments shelter patients from the stresses of illness. Boyd recently helped set up an ICU follow-up program at Kingston General that invites people back to talk about their experiences and visit their former hospital rooms to dispel bad memories. Roger Wong, executive associate dean of education at the University of British Columbia’s Faculty of Medicine, would like to use technology to help reorient patients by connecting them with familiar photos on social media.

Wong has made hospital-acquired delirium part of the curriculum at UBC. But Canada’s seventeen medical schools, he says, are subject to the same inconsistencies as the health care system as a whole. For now, one of the most reliable prevention strategies is the Hospital Elder Life Program, developed in 1993 by Sharon Inouye, now a professor of medicine at Harvard Medical School. The program, which is designed to keep patients mobile, oriented, hydrated, and well rested, is slowly being adopted worldwide. The strategies it recommends—putting calendars in patients’ rooms, minimizing the use of sedatives, coordinating nursing staff so that people aren’t woken up several times a night—reduce the chances of acquiring delirium by 40 percent. St.Joseph’s has implemented some prevention tactics, including having volunteers conduct orienting conversations (discussing newspaper headlines, for example) with patients—but there’s limited coordination between wards. “It’s about priorities and resources,” St. Onge says. “Hospitals are struggling to deal with acute issues, so preventative programs have a hard time.”

Today, Marsden doesn’t remember much about his ordeal, and his daughter is thankful for that. Clarke believes that if there’d been more information available, family members could have better prepared themselves for what happened. Marsden is home again and taking antidepressants, but his family is terrified that delirium will return. Clarke says this time she’s ready to take action at the first sign of the condition. “I don’t care if I make people mad—my dad will get the care he deserves.”

Sydney Loney has had work published in the Globe and Mail,
Reader's Digest, and Chatelaine.
Taryn Gee

Taryn Gee is a Halimton-based illustrator. Her clients include the Globe and Mail and lowestrates.ca.