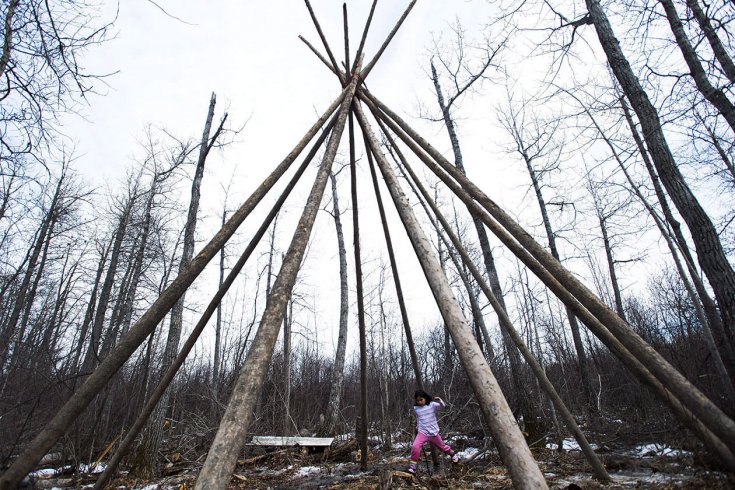 In late 1998, the Norway House Cree First Nations passed a band council resolution (BCR) banning residents from “selling, using, possessing, or promoting the illegal use of drugs, or use of alcohol on the Reserve.” Punishment included loss of jobs, loss of income assistance, public shaming, and, ultimately, banishment.

The nearby RCMP detachment turned over the names of eighty residents they believed were involved in activities covered by the new rules. The band council soon ordered Tron Gamblin and Angela Monias to appear before them and explain why they were on the RCMP’s list. Gamblin was forced to sign a letter promising to refrain from illegal activities. A few months later, in March 1999, Gamblin was found in possession of marijuana. Within days of his arrest, the couple received notice ordering them to vacate their home.

Believing his eviction was against the law, Gamblin ignored the order. On March 30th, the band council issued a new BCR, banishing Gamblin and his family immediately. The next day, Gamblin was escorted off reserve by police. Monias and her child were taken by social workers.

This account comes from the decision in Gamblin v. Norway House Cree, a 2000 court case that saw Gamblin and Monias’ banishment ruled illegal because the punishment was carried out under the authority of a BCR—and not through a bylaw, which would have required the approval of the then-Minister of Indian Affairs. In spite of that judgement, the practice has continued to gain ground among First Nations governments. Just this year banishment has been proposed or introduced on Saskatchewan’s Sandy Bay First Nation, Quebec’s Obedjiwan First Nation, and New Brunswick’s Tobique First Nation. These governments join dozens of other First Nations that have recently introduced or proposed banishment as an additional punishment for drug trafficking, violent crime, pedophilia, and gang activity. Some, such as the Ahousaht First Nation, have threatened banishment for activities that aren’t even crimes, such as refusing treatment for drug or alcohol abuse.

Banishment has deep roots in many First Nation societies as a way of addressing intractable social problems. It was the ultimate punishment in pre-contact justice systems that valued the well-being of the community over that of the individual, and it was one of the first forms of Indigenous justice resurrected once First Nations began to regain their autonomy in the ’70s and ’80s. Before becoming Justice Minister, Liberal MP Jody Wilson-Raybould served as Regional Chief of the Assembly of First Nations in BC. In that role, she co-authored, with her husband, a manual for BC First Nations governance which described the “ultimate sanction” of banishment as useful form of alternative justice in Indigenous societies without prisons.

Banishment can last a few months, a few years, or it can have an indefinite term, with the punishment only lifted “once the person gets help for a drug addiction.” On some reserves, such as the Muskoday First Nation in Saskatchewan, banishment can be permanent. On reserves where housing is in scant supply, a house of a banished person can be re-assigned to someone else, with the banished going to the back of the line for a new home, sometimes waiting for years. In most cases, banishment effectively means loss of connection to the reserve. For a rooted people like First Nations, this is devastating. The reserve is not only home to family, but also may be the only place in the world where the banished can practice their religion.

Indeed, it’s hard to think of a crueler punishment to inflict on First Nations person. In a March 2017 editorial in the Two Row Times, a newspaper on the Six Nations reserve in Ontario, editor Jonathan Garlow warns against banishment, saying:

“We used to belong to each other. That’s why I find it shocking when self-righteous voices from within the indigenous communities cry for the ‘drug houses’ to be destroyed and the dealers to be banished forever; executed on sight. Why do we behave as if addicts are the ultimate enemy?”

Garlow goes on to draw a connection between addiction and the high rates of PTSD among residential school survivors. Those being banished, in other words, are among the most at-risk people of the most at-risk group in this country. Indigenous drug addicts make up a vastly disproportionate number of Canada’s prisoners, murder victims, overdose victims, and missing women.

The callousness alluded to by Two Row Times is evident in the words of Mel Buffalo, band director of Alberta’s Samson First Nation and a banishment proponent: “The communities surrounding our area are saying, ‘Well, you’re just farming off the problem onto us.’ I’m saying, ‘Yeah, well so what? That’s your problem.’”

While a few voices from within the Indigenous community oppose banishment, non-Native media has reported on it at best neutrally, and certainly with none of the principle it mustered during the debate on Bill C-24—a bill that gave government the power to deport dual Canadian citizens for crimes such as terrorism, espionage, or treason. At the time, newspapers across Canada published hundreds of articles condemning the practice of exile. In a Globe and Mail editorial, professor Audrey Macklin from the University of Toronto wrote that Bill C-24 turned “citizenship from a tool of integration into a reward for good behaviour.” In doing so, she wrote, the bill “undermin[ed] the meaning and value of citizenship for all Canadians.”

The controversy over Bill C-24 shows us the type of debate we should be having in First Nations communities over banishment. One reason that debate is nonexistent is a basic misunderstanding of First Nations citizenship, a confusion that some Indigenous leaders also seem to share.

The word “citizen” isn’t often used when discussing First Nations; instead, the word “member” is preferred. But membership is different from citizenship. The former is used more often with fan clubs and condo boards—it’s not a word that belongs to nationhood. The word is a holdover from when non-Natives had exclusive control over who was and was not considered to be Indigenous. In that long era, the Canadian Government removed Indian Status and involuntarily banished people from reserve for causes that included attending university, serving in the military, or joining a religious order. The goal of the government and the purpose of this form of banishment was, in the oft-quoted words of Duncan Scott, superintendent of Indian Affairs, “to continue until there is not a single Indian in Canada that has not been absorbed into the body politic, and there is no Indian question and no Indian Department.”

The Canadian government began to give up control over membership in 1985, with Bill C-31. In his introduction of the bill to parliament, the Indian Affairs Minister, David Crombie, said: “What greater intrusion can there be than the arrogance of assuming the right to tell another people of another culture and tradition who is and who is not a member of their community and who can and cannot live on their lands.”

Bill C-31 didn’t just return control over membership to First Nations governments. It also restored the status of tens of thousands of First Nations women who had lost it due to sexist clauses in the original Indian Act. Before 1985, if a First Nations woman married a person who was not registered under the Indian Act, they would lose their Indian Status. The effect of this was, again, banishment.

Speaking before a Senate Committee on Bill S-3 in June (a bill which will continue the work of eliminating sexist distinctions from the Indian Act), a First Nations witness, Sharon McIvor, spoke about the “vulnerable” situation she was left in by her own forced exile thirty-eight years earlier:

By treating banishment as a legitimate punishment, First Nations governments join those victimizers. Regardless of who is using it, banishment has been a tool of assimilation, and those who use that tool are continuing the legacy of cultural dispossession and predation of at-risk Indigenous people that created the very group of lost souls they’re seeking to punish. As Jonathan Growal noted in the Two Row Times, the drug and alcohol problems we see on some reserves flows directly from the intergenerational trauma caused by the forces of assimilation off reserve.

First Nations governments have a responsibility to govern for all of our people, not just the good ones. For other Canadians, no matter how many mistakes they may make, no matter how far they may fall in their lives, they will always have a home. But can the same be said of a First Nations person on a reserve where banishment is the law of the land?

Chiefs who lean on banishment as a panacea are trapped in the Indian Act mentality that reduced our sense of belonging to that of being “members” instead of “citizens.” These chiefs are doing the work of the old administrators of the Indian Act—they’re victimizing the weakest of us, furthering the cause of assimilation, and undermining the sovereignty we have all fought so long for.