Where the Wild Things Were | The Walrus
Skip to content 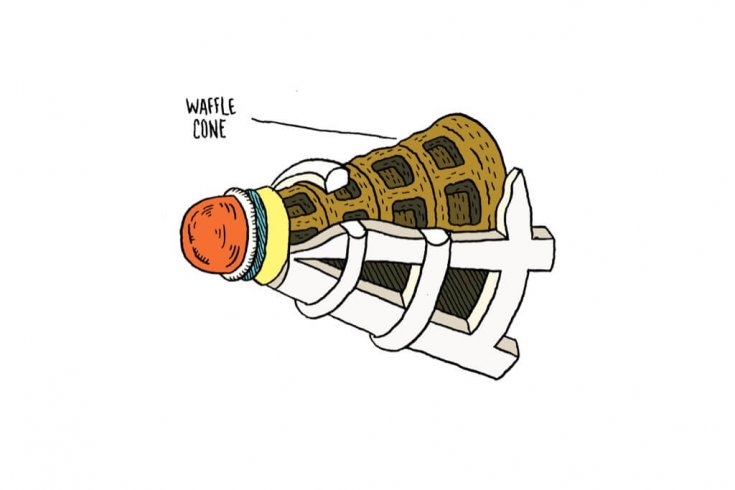 He howls into the night, his hulking silhouette stark against the full, silver moon. Both man and beast, his is a figure that has prowled through the darkness of the human psyche for centuries. He is the loup garou, the werewolf. Just as 2009 has been called the year of the vampire, 2010 is predicted to be the year of the lycanthrope. In New Moon, the latest Twilight installment, a dashing young werewolf (Taylor Lautner) steps up as a romantic foil for the brooding vampire heartthrob Edward Cullen (Robert Pattinson), while a remake of The Wolf Man, a TV spinoff of Teen Wolf, and the literary mash-up Little Women and Werewolves are all in the works.

In the December issue of The Walrus, Jessica Johnson’s essay “Dances with Werewolves” examines Kelley Armstrong’s incarnation of the legend in the Otherworld book series. (Not to be confused with the Underworld films, which pit werewolf slaves against their vampire masters.) Armstrong’s monsters are by no means the first of their kind to hold the masses in thrall—and they won’t be the last. On the brink of a new pop phenomenon, here’s a look back at some of the most influential werewolves to have terrorized the cultural landscape.

Although werewolf legends (and alleged sightings) proliferated in fifteenth- and sixteenth-century Europe, the beast’s literary origins date to imperial Rome. Ovid’s epic included one of the first werewolf myths in its account of King Lycaon, the cruel Arcadian ruler who is turned into a wolf by Zeus as punishment for feeding the god the body of a dismembered child. The poem vividly detailed Lycaon’s terrifying transformation from man to wolf, describing how his “clothes changed to coarse hair, his arms to legs,” and how he “howled his heart out, trying in vain to speak.” Ovid set the standard for the focus on the ghastly “change” in werewolf literature to come, and also provided the werewolf with a menacing alias: the lycanthrope.

The dialogue was laughable, and in his wolf makeup and Brillo pad fur, Lon Chaney Jr. looked more like a disgruntled gorilla than a big bad wolf. But, for better or worse, it was this 1940s film series that codified werewolf mythology in the modern imagination. Although other stories had introduced the werewolf’s change as monthly, these films established the transformation during the full moon as a key element of lycanthropic lore, and introduced the werewolf’s vulnerability to silver. After the success of the first movie in 1941, Chaney donned the wolf skin four more times. His Wolf Man travelled the world looking for a cure, meeting the Frankenstein monster, Dracula, and even Abbott and Costello en route. Dated? Perhaps. Schlocky? Absolutely. But The Wolf Man’s legacy is indisputable as the originator of the werewolf horror film.

An American Werewolf in London, 1981

If The Wolf Man is the cornerstone of contemporary werewolf ideology, then John Landis’s comedy-horror classic pioneered the genre’s gruesome physicality. Before Landis’s film, about the cursed fate of travelling student David Kessler (David Naughton), we’d heard and read about the werewolf’s transformation, but we’d never seen it depicted in the raw flesh. Landis placed a number of graphic scenes before the crucial moment—the reanimated corpse of David’s best friend plays a supporting role—but nothing could have prepared the audience for the hero’s grisly change. Writhing on the floor in sweaty terror, David moaned and wailed in pain as his hands became clawed paws, fur shot out of every pore, and his bones and joints mutated into those of a four-legged animal. In that moment, the werewolf was freed from the shadowy woods and isolated villages of an archaic Gothic tradition; when the transformed Kessler proceeded to slaughter innocent Brits in the London Tube, this mythological bête noire became a chillingly real urban terror.

Like many ’80s teen comedies, Teen Wolf (starring Michael J. Fox at the height of his elfin charm) has not held up over time—corny dialogue, reductive stereotypes, and multiple montages set to the steady beat of synthesizers and keyboards have stunted its shelf life. But although Teen Wolf lacked a certain cinematic gravitas, as werewolf legends go, it remains a revolutionary gem. In a brilliant conception, director Rod Daniels turned lycanthropy into a metaphor for puberty. “He’s going through changes,” the tagline read. “His voice is changing. He’s got hair on his chest. He’s stopped being a boy. At last he’s become— A WOLF!” Unlike his lycanthropic ancestors, Scott Howard (Fox) did not transform into a skulking, ferocious predator, but rather into a slightly furrier, toothier version of his former self. Howard experienced the changes during the more awkward moments of a teenage boy’s life—in the gym locker room and at a party, for example. In this film, being a werewolf translated directly to masculinity. No longer smooth and rosy-cheeked, Scott became high school royalty as a result of his new physique—the novelty of the wolf earned him popularity, heightened his athletic ability, and won him the object of his romantic affection. While other werewolves of literature and film were ostracized for their difference, Scott’s lycanthropy was his key to social success.

The werewolf genre is almost exclusively dominated by men. There had been exceptions, but until the 2000 Canadian indie flick Ginger Snaps, no one had ever truly examined the female side of the beast. This was a bizarre omission, considering the seemingly obvious, somewhat Freudian associations between the lunar change and the menstrual cycle. Director John Fawcett made this connection explicit: Ginger (Katharine Isabelle), a morbid, death-craving sixteen-year-old, is attacked by a lycanthrope on the day she gets her period, and predictably, begins to change. Breaking apart from other cinematic werewolves, who are humiliated and tortured by their conditions, Ginger embraced her new self—she became confident, sexually adventurous, and saw her werewolfism as a way to break from the oppressive confines of her Toronto high school. Sadly, her newfound self-esteem came with an insatiable blood-thirst and a monthly change. Although the movie broke ground with its treatment of female werewolves, its association of menstruation with monstrosity remains problematic; in attempting to challenge the werewolf genre, Ginger Snaps ended up inadvertently perpetuating sexist stereotypes. During “that time of the month,” Ginger, quite literally, became a bitch. As promised, Ginger snapped, and despite the film’s feminist agenda, lycanthropy became just a particularly nasty case of PMS.

Of the plethora of monsters and evil-doers that terrorized Buffy Summers and the town of Sunnydale over the course of seven seasons on the air, the monosyllabic, wide-eyed musician Daniel “Oz” Osbourne (Seth Green) was an unlikely candidate for havoc-wreaking. After being bitten by a lycanthropic toddler, however, Oz became a strapping werewolf who caged himself during the full moon. As his character developed and the visceral werewolf within became more demanding, Oz transformed from a taciturn comedic sidekick into a poignant figure struggling with questions of agency and consequence. In many literary and cinematic incarnations of the werewolf, responsibility for attacks is erased due to the involuntary nature of the change. Oz turned this motif on its head—for him, werewolfism became a part of who he is, rather than something that happens to him. When his time on Buffy came to an end, Oz had mastered his lycanthropic tendencies—no longer subject to the lunar cycle, his changes were self-determined and controlled. Frequently, the primal animalism of the werewolf is associated with instinct over thought, gratification over restraint. In its thoughtful treatment of Oz, Buffy broke through these genre barriers—rather than representing a passive state of self-indulgence, the werewolf became a stand-in for larger questions of ethical responsibility.

Emily Landau is an associate editor at Toronto Life and a former Walrus intern.