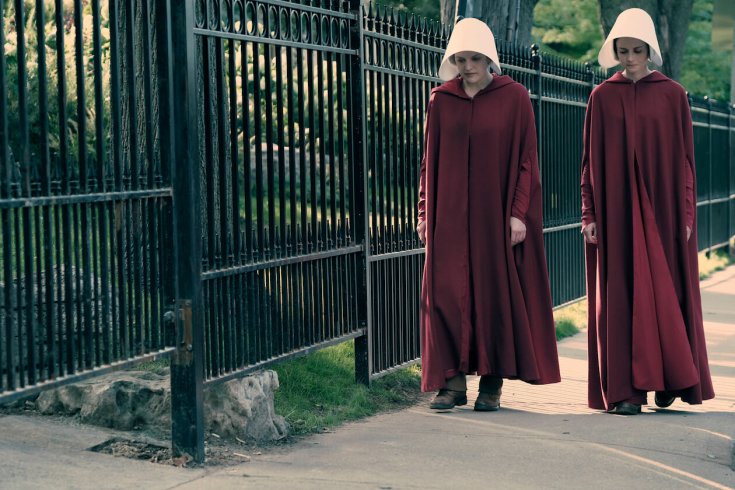 Girls Scouts have been in the news an unusual amount recently. Earlier this month, the Kansas City Archdiocese decided to sever ties with the century-old American girls club—part of a head-scratching backlash on the part of US conservatives to link Girl Scouts with abortion rights and the nebulous thought crime associated with holding “liberal values.”

Another incident is barely a story—more of a meme, really. In an arresting image that proliferated via a flurry of exuberant tweets, a sixteen-year-old Girl Scout in the Czech Republic named Lucie Myslikova stares down an unnamed skinhead at a May Day rally. The man is intimidating, dressed in black and dark glasses, the tendons in his neck straining as he shoves his face into hers. Lucie is clear-eyed and unflinching, facing him with the kind of teenage bravado that makes you proud, but that also makes you a little worried.

I thought about Girl Scouts as I watched the first few episodes of the new TV adaptation of Margaret Atwood’s ‘80s-era dystopian novel, The Handmaid’s Tale. Watching the show evokes a similar experience to reading the book as an undergrad. It causes you, if you’re a woman, to regard the real world with slightly more alarm and attention. You prick up your ears, tense—like a woodchuck poking its head above ground, alert for signs. And then, naturally, you start to see those signs. You see them everywhere. You think: of course the would-be patriarchal masters of “Gilead”—like the quintessential Christian sexual hypocrite Bill O’Reilly, or the Evangelical authoritarian Mike Pence—would find Girl Scouts intolerable. Women’s organizations are, by their very nature, subversive to totalitarian authority. Women’s community, women’s adeptness in the world, their self-reliance through co-operation, their successful fundraising via the sale of preternaturally delicious cookies—this is too much power; it cannot stand.

The Girl Scouts motto is “Be prepared.” Offred, Elizabeth Moss’s enslaved character on the series, admits that she was not. “Now I’m awake to the world,” she confides in the first episode’s voice-over, floating down the street in her red cloak and wimple, side by side with another Handmaid she doesn’t trust—all human relationships in the theocratic Republic of Gilead are engineered to serve as a kind of secret police.

“I was asleep before,” says Offred. “That’s how we let it happen.”

There are many lines like the one above, sentiments disconcertingly relevant to the actual present. Offred is speaking to the terrifying fragility of any given system—any way of life we’ve become lazy enough to think of as “normal.” “This will become ordinary,” says Offred’s captor, Aunt Lydia, enthusing to Offred and her fellow prisoners during their Handmaid training at the Red Center. (For those who don’t know, Gilead is suffering from a fertility crisis due to pollution—Handmaids are fertile women who are given as baby-making slaves to rich, unfruitful families.) Later, out of earshot of Aunt Lydia, Offred is reunited with a friend from her previous life, Moira. Enraged at their abrupt status as rights-free breeding chattel, Moira orders Offred to stay strong, vowing: “This crazy shit is gonna end.”

The Handmaid’s Tale might caution us to be prepared for change, but it also reassures us—in its bracing, no-bullshit, Margaret Atwood kind of way—there’s always hope.

But then the flashbacks begin, depicting the end of what came before—Moira and Offred in their comfortable, egalitarian, pre-Gilead society. Back then, Offred’s name was June, and her past, we discover, is our complacent present. There were iPhones. Tinder. Lululemon. Brunches. Wine. Earbuds. Gainful employment working alongside with men—if not always for equal pay. And sure, every once in awhile some rando would yell “slut” at you, either online or off, but otherwise everything was more or less OK—and looking to stay that way.

Less than two years ago, when Justin Trudeau was elected prime minister, he decreed that his cabinet would represent the genders equally, fifty-fifty. He was doing this, he said, “because it’s 2015.” As if that’s how history plays out. As if things naturally just get better and more equitable as the years pile up. As if there’s reason to believe that human society, left to itself, will tend toward the rational and humane—until pretty soon we’re all living in some kind of jumpsuit-wearing Star Trek utopia, the hallmark of which is the irrelevance of gender and ethnicity when it comes to human rights, dignity, and status.

Still, it was nice of him. The next prime minister may, of course, very well undo any and all such initiatives around equal representation. The next prime minister could well have an active hostility toward such ideals and make it a personal mission to not just undo them, but to put forward brand new initiatives—initiatives that make the lives of women and people of colour more dangerous and less free. It goes without saying that this is what we see taking place in the United States at this very moment, eight years after the country elected its first black president under the banner of hope and change. Another lesson from The Handmaid’s Tale: change isn’t always what it’s cracked up to be.

The feeling of fragility is everywhere in the series, indicating that the change represented by the Gilead regime is still delicate and ongoing. Top 40s radio, for example, sometimes plays in Offred’s head. The masters of Gilead haven’t yet succeeded in eradicating those sinful memories of what came before. Meanwhile, everyone seems terrified—even those in power. Offred’s owners—the Commander and his constrained wife, Serena Joy—say little, moving about the house as if on eggshells. Offred herself is quiet, only speaking when spoken to. The house is hushed. The streets are still. The Wall, where criminals of the regime are strung up every day as warnings to would-be subversives, is deathly. Yet every now and then there’s an explosion. Gunfire out of nowhere. The rumble-and-crash of a Catholic cathedral being razed to the ground. And the cathartic shriek of the Handmaids themselves, pressed into service as ritualistic executioners for the regime. Even Offred participates, knowing that the man she and her fellow Handmaids are tearing to shreds is likely innocent, likely a freedom fighter. But she also knows she has no choice, and so she gives herself over to a shrieking bloodlust—the only outlet handmaids are provided for their rage.

Then, of course, there is the ultimate cataclysm‐the noise that causes Gilead’s powerful and powerless alike to hold their breaths: the screams of a Handmaid in labour. And no guarantee that they’ll be followed by the cries of a healthy infant.

It’s all about what’s going on beneath the surface—what is burgeoning, ready to burst forth. Nothing illustrates this struggle more adeptly than the close-ups on Elizabeth Moss’s extraordinary face. The Handmaid’s Tale could devote an entire episode to the actor’s various flinches, micro-frowns, and eyebrow movements—and I, for one, would not be bored. Beneath her wimple (“wings,” they call them in Gilead), Moss reveals an opera’s worth of anguished narrative. “I don’t need oranges,” she thinks, after being sent to fetch groceries for the Commander’s household (because even walking wombs need to something to do from time to time). “I need to scream.” But she doesn’t need to scream—at least not for the viewer’s benefit. She’s doing it all with her features.

The Handmaid’s Tale might caution us to be prepared for change, but it also reassures us—in its bracing, no-bullshit, Margaret Atwood kind of way—there’s always hope. An electric moment occurs, in the second episode, between Offred and the companion she mistrusts, Ofglen. Hope flares briefly to life, and in that moment, the two women finally, fully see each other. They’ve both been wary up until this point, uncertain if the other is a spy. But now they talk about their old lives as free and equal people and, with dawning, unspoken excitement, come to recognize one another as fellow resisters of the regime. They walk to a shop window and stand side by side, appearing to look into it. But what they’re actually looking into is each other’s eyes. It’s electric, not just because if Elizabeth Moss and Alexis Bledel, who plays Ofglen, were to hold a pierce-off in terms of the blue glare of their eyes, it would be a toss up. But the real exhilaration resides in knowing that in this single, fragile moment, Offred and Ofglen have reclaimed the two sustaining virtues Gilead has worked so tirelessly to eradicate in the Handmaids—virtues taught to every Girl Scout. Courage, hand in hand with community.