What Television Gets Wrong about Poverty | The Walrus
Skip to content 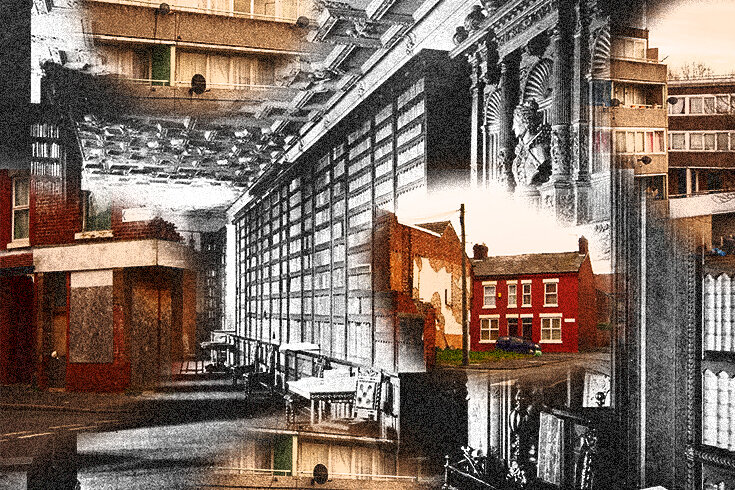 One of the more popular forms of escapism during the pandemic has been to binge Netflix’s The Crown. During the fifth episode of the fourth season, set in 1982, reality arrives at the royal doorstep in the form of out-of-work housepainter Michael Fagan, based on the real-life man who broke into Buckingham Palace to seek an audience with the Queen. The Crown’s Fagan is a man facing the external collapse of community without the internal support of family, his dreary life a testament to the atomization and individualization of British society in the early 1980s, when unemployment was high and, to combat rising inflation, funding for social programs of all kinds was slashed. Frustrated with the indifference he’s faced from various levels of government, Fagan decides that he has no other recourse than to go to the top.

After letting himself into the Queen’s private bedchambers, Fagan explains his belief that she should personally meet a subject who can “tell it to you like it is.” The Queen sympathetically hears out the downtrodden commoner and, in a tender moment of shared humanity, touches his hand before the police drag him away. So convincing is Fagan’s bedroom speech that the TV Queen is later depicted butting heads with then prime minister Margaret Thatcher over the state’s responsibility to its citizens, going so far as to invoke Marxist historian E. P. Thompson’s concept of the moral economy. In reality, the Queen left the room as soon as she could, and it’s highly unlikely that she was moved enough by Fagan to take the prime minister to task.

Despite being hailed by The A.V. Club as an “impressively damning indictment” of Thatcherism, the episode’s aesthetic treatment of the era and depiction of Fagan’s interaction with the Queen undermine any coherent critique. The Crown treats historical circumstance as ambiance, providing a fresh, albeit compartmentalized, theme for each episode. What results is an expensive knock-off of social realism, the gritty, grey-toned scenes of Fagan fighting his ex-wife’s new beau or yelling at a bureaucrat serving as brief diversions from the visually lush shots of the real stars. This is to be expected from a show that is ultimately a gilded soap opera. However, the social-realist style The Crown emulates is firmly rooted in traditions of resistance, solidarity, and societal critique. The episode attempts the searing criticism seen in films by directors like Ken Loach and Mike Leigh, but The Crown ultimately fails where those succeed in saying something substantial about how austerity’s unfair burdens undermine and radicalize working-class communities.

Austerity describes economic policies that attempt to reduce public-sector debt, often by cutting government spending on welfare programs. Its effects can be disastrous—for example, a 2012 paper in the journal Clinical Medicine looked at the results of European austerity imposed after the 2008 financial crisis and found that people were unable to access health care and suicides increased. Experts are also increasingly calling the economic rationale of austerity into question: government debt may not matter as much as we’ve long been told and not nearly enough to justify removing the social supports on which people depend.

We lack a way to talk about the potential consequences of austerity or a way to visualize resistance. Film, television, and books are among the most effective media for transmitting historical narratives and perspectives, and audiences deserve depictions of life under austerity that take seriously the material conditions and human loss endured after cuts. We need productions that embrace social realism without condescension, interrogate class insightfully, and present characters that are not caricatures. Depictions of austerity that go beyond historicized gawking and explore examples of resistance and alternatives can provide us with narratives, symbols, and ideas that may help structure responses to contemporary and future economic hardship. Think of how often 1984 or The Handmaid’s Tale—both books later adapted for film and TV, respectively—are invoked to identify creeping fascism, conformity, institutional misogyny, and so on. We need to be able to better identify the critiques being made in media about austerity and relate them to contemporary life—that will give us the shared language to talk about the threat austerity poses.

Although Canadians experienced a taste of austerity with the Liberal’s federal budget in 1995, the country has never experienced cuts to the degree that was seen under Thatcher. That does not mean, however, that we never will.

Since the beginning of the pandemic, unemployment has touched hundreds of thousands of Canadians while wealth disparity has continued to deepen. It appears that the federal government has learned from the policy mistakes made during the Great Depression, when conservatives were slow to initiate relief. However, finance minister Chrystia Freeland was perhaps a tad optimistic when she told the Toronto Global Forum, an annual economic conference, that “there are few disciples of Ayn Rand in a pandemic.” After all, the pandemic isn’t over yet, and the calls for deep cuts have already begun. Organizations like the Canadian Taxpayers Federation have repeatedly brought up the deficit while the Fraser Institute has expressed worry over CERB disincentivizing work and saddling future generations with debt. Even last year, former prime minister Stephen Harper was already calling for postpandemic cuts in the Wall Street Journal. Concerns about the budget are a well-trod conservative talking point, and as the pandemic recedes, fiscal conservatism will surely attempt a comeback.

Fortunately, we can remain in the space and place conjured by The Crown’s fourth season to find better depictions of the ravages of austerity: Shane Meadows’s This Is England film and television series and Sue Townsend’s Adrian Mole novels both depict the costs of cuts in a way that The Crown only pretends to, challenging audiences to consider the destabilizing effects of austerity upon people and communities without the gloss of royal pity. While these series were popular with audiences and critics in the UK when they came out, they haven’t reached the status of cultural touchstones, especially here in Canada. We need honest accounts of austerity to remind us of the human costs of cuts—particularly as the pandemic demonstrates how the haves do not equally share in economically induced suffering and how calcified class stratification remains in Canada.

The first in Shane Meadows’s This Is England series is a film that explores how neofascist ideology crept into and corrupted British skinhead culture in the 1980s. In the film, set the year after Fagan’s Buckingham Palace break-in, a group of working-class skinheads adopts Shaun Fields, a younger, bullied boy who recently lost his father in the Falklands War.

Their relative harmony is disrupted when an old friend, Combo, is released from prison, where he was radicalized. Combo causes a split in the group by denouncing immigrants and singling out the lone Black member—an event that is emblematic of how British neofascist political groups like the National Front and the British National Party were able to exploit widespread unemployment and anti-immigrant sentiment during this period, confronting audiences with an inevitable consequence of austerity: the weakening of multicultural solidarity and surge of resentment politics as the welfare state dissipates.

Meadows’s subsequent instalments are the television series This Is England ’86, ’88, and ’90, which follow the same characters across the decade, albeit with less focus on far-right radicalization. Instead, the series explore how community is maintained in the face of, and eroded by, austerity. The strength of the series lies in the interpersonal bonds that resisted the alienating, divisive influence of austerity as the decade drew to a close.

Sue Townsend’s Adrian Mole series is lighter in tone than This Is England but captures a similar sense of humanity and resilience in the face of austerity. The first three books, The Secret Diary of Adrian Mole Aged 13 ¾, The Growing Pains of Adrian Mole, and The True Confessions of Adrian Albert Mole, were published during the Thatcher years. The namesake protagonist is a teenage would-be intellectual and writer growing up amid the wreckage of the welfare state and a moribund political left. Mole’s family is dysfunctional and both parents regularly experience extended periods of unemployment.

Where Townsend’s work succeeds as social realism is in representing the powerlessness that austerity foisted upon families—and in doing so without falling into either misery memoir or hagiography. Mole’s family, writes journalist Maxton Walker, was “created specifically to sit on the fault line between the disfranchised working classes and those destined to be sucked into Thatcher’s social revolution.” In one of the series’ more illustrative passages, Mole visits a poor family he knows and is saddened by their want. He’s then shocked when he returns to his comparably more comfortable (but not by much) home and learns that it was all built on credit. The contrast is complicated, however, by the relative happiness in the poor household and the domestic strife in Mole’s.

Much of the strength of This Is England and the Adrian Mole books draws from their creators’ experiences. This Is England is semi-autobiographical, with its main character standing in for Meadows, while Adrian Mole’s day-to-day life draws from Townsend’s own struggles with poverty, cuts, and Kafkaesque bureaucracy. Their depictions of life under Thatcher are widely praised in the UK. The Adrian Mole series has been hailed for accurately capturing the zeitgeist of the period, and in 2019, the BBC included the first book in its 100-most-influential-novels list. The independent film This Is England, meanwhile, garnered enough critical acclaim to spawn the award-winning series. These are only two examples of the British social realist tradition, but their acclaim is notable—the UK anti-austerity movement is strong in part because it has a rich well of cultural memory and representations to draw from. These representations link contemporary audiences to past circumstances, transferring vital ideas, symbols, warnings, and lessons about life under austerity without being overtly instructional.

As the pandemic’s end appears on the horizon, shadowed by threats of austerity, cultural engagement with the fallout of cuts is desperately needed. Audiences that want to move beyond the superficial gaze of The Crown and take the survivors and victims of Thatcherism seriously, on their own terms, will find in Meadows’s and Townsend’s works both portents of what may come and celebration of what couldn’t be destroyed by indifference and deprivation.

Daniel Panneton is a public historian and writer based in Toronto. His work has appeared in the Globe and Mail, the Literary Review of Canada, Maisonneuve, and This.