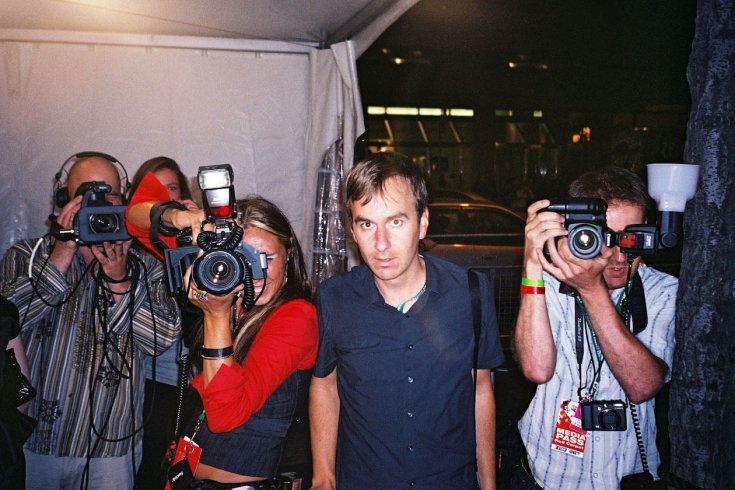 Nearly every single day, for almost nineteen years straight, I’ve taken a self-portrait on 35mm film. My intent is to create a visual archive of my adventures. (In 2012, Time magazine described my series as “an epic, inspired, and ever-evolving art project that documents a life well-lived.”) And if I’m given the opportunity, I’ll ask a public figure to take my self-portrait for me. Some of the “guest photographers” I’ve recruited include Al Gore, Marina Abramović, Patti Smith, and Kim Cattrall. For this year’s Toronto International Film Festival, I’m sharing photos taken by notable talent dating back to 2002 along with my reflection on the changing nature of celebrity and access.

This was taken at the classic (but now defunct) Uptown Theatre. Gerry is a little-known film written by and starring both Matt Damon and Casey Affleck. After the film ended, the talent stepped down off the stage and into the theatre seats to exit the theatre. Legendary director Gus Van Sant was the one I most wanted to meet, as I was a long-time fan of his films Drugstore Cowboy and My Own Private Idaho. He seemed baffled by the exchange but suggested I move down some rows to get some distance. I awkwardly climbed over a few rows and balanced precariously on a folded-down theatre seat, nervous about drawing too much attention to my outfit of shorts and Tevas among the well-dressed VIPs.

Go Further, a documentary about environmental activists, features Woody Harrelson leading a bus as it drives down the West Coast of America powered by hempseed oil. At the after-party for the movie, Harrelson was openly smoking pot — something quite radical a decade ago for a celebrity out in public at a time when pot was very much seen as illegal. I remember Harrelson was encircled in puffs of smoke. I was nervous approaching him, thinking he’d roar, “Get away with your camera,” but he just said “suurrrreee man” with a huge chilled-out grin on his face. I was eating an ice cream ,and I think it’s somewhat appropriate that I’m out of focus in the photo.

The Brown Bunny was perhaps the hottest ticket of the Festival that year, due to an explicit sex scene. After the film, we exited out into the back alley behind the Uptown Theatre. Gallo and co-star Chloë Sevigny were walking together, headed to a party across Bloor Street at Holt Renfrew. Gallo stopped to socialize while Sevigny kept walking. Today, if TIFF stars were attending a party across the street from the theatre, they would be taken in a fleet of black Cadillac Escalades and it would take them thirty minutes to coordinate a getaway to avoid the throng of fans. This image is somewhat prophetic about two trends: photo bombing and the selfie.

This was a Jeff Garlin (Curb Your Enthusiasm)–directed documentary about John Waters’s one-man show. I attended the after-party, and at the time, I wasn’t really sure if I wanted Waters to take my photo. My knowledge of his work at that point was his outrageously bad-taste B-movies from the ’70s, such as Pink Flamingos. My off-kilter smile was me literally being uncomfortable in front of the camera thinking, “I’m not really sure I want John Waters to be taking my photo”. I’m glad I did, because the following year the remake of Hairspray was released (starring John Travolta) and cemented Waters’s status and legacy in the mainstream.

When Michael Moore exited his press conference at the Sutton Place Hotel, there were only a half dozen fans waiting to meet him. Today, there would be barricaded streets complete with security and police details and a crowd of several hundred people. Still, a familiar scenario for Moore is that of chasing down a politician or CEO who doesn’t want to talk to him. When he took my photo, I raised up my hands to cover my face in a similar “no comment” gesture.

In cinema, what lies outside of the frame is often just as important as what is clearly visible. That is why I prefer to have the celebrity shooting behind the lens in my pictures, as I feel it makes for a more mysterious result. I caught Herzog exiting the back alley of the Elgin Theatre, handed over my camera, and asked him to take my photo. I remember thinking Herzog would appreciate my “high concept” series. I was slightly disappointed when he instinctively put his arm around me and took a selfie in the most conventional way possible. However I wasn’t going to try and correct a director as visionary as Herzog on how to properly shoot with a film camera. Plus, he was about three years ahead of the curve in terms of the selfie phenomenon.

I attended a party upstairs at the Shangri-La Hotel, and on the way out, I noticed a cluster of beautiful people in the lobby dressed in traditional Indian clothing. A longtime acquaintance, Devyani Saltzman, waved me down, and I soon realized the crowd was the cast of Midnight’s Children (directed by her mother, Deepha Metha). They were waiting to be driven over for the premiere of the film at Roy Thompson Hall. Rushdie was cozied up by the fireplace, in open view and remarkably calm considering he was still living under the threat of the fatwa issued in 1988 after the publication of his novel The Satanic Verses). He obligingly took my picture.

When I have a celebrity take my photo, I try to have subtle clues of their personality in the shot (for example, when Gene Simmons once took my photo, I had my tongue sticking out as far as possible). With Metallica drummer Lars Ullrich, my only plan was to make a heavy-metal type facial expression . . . so it was a nice bonus for me when he spontaneously added in his own devil-horns hand gesture to complement my pose.

Director Atom Egoyan’s Remember would receive a TIFF gala premiere at Roy Thompson Hall, but a few weeks prior, I was invited to a practice screening for his cast and crew at the Royal, a neighbourhood cinema. Egoyan has filmed other movies in this neighbourhood — 2009’s Chloe included scenes with Julianne Moore and Amanda Seyfried up the block at Café Diplomatico — so it was logical that he take my photo in front of this Italian pizzeria.

In the age of Instagram, there is a lot more competition than there once was to approach celebrities. Gone are the days when they walked off the theatre stage and into the audience — now, fans are corralled behind barriers and wait for the actors to approach. When Bryan Cranston made it down the line to me, he remarked, “I haven’t seen one of these in a long time”, intrigued by my 35mm film camera. He took a step back to modestly art direct the photo, instructing me to look straight into the lens. I love that in the background there is a guy (on my left, with an orange wristband) taking a selfie of the celebrity in the act of taking my self-portrait.

All photos courtesy of Jeff Harris.

Jeff Harris is a Toronto-based photographer whose work has been featured internationally.