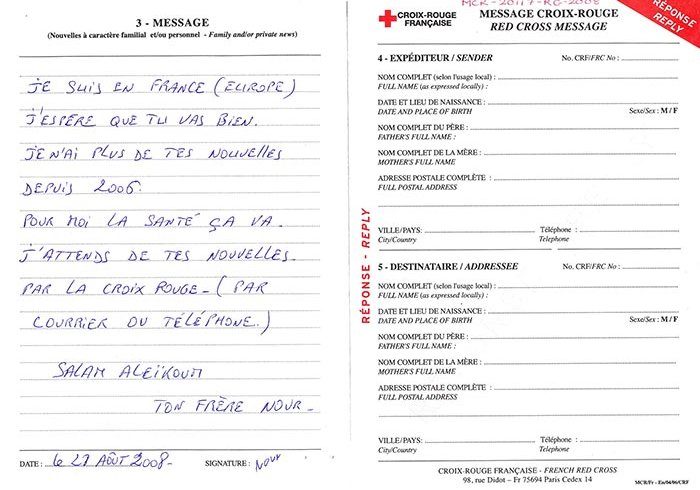 The conflict between the Sudanese government, supported by militias collectively known as Janjaweed, and armed opposition groups in the country’s Darfur region has resulted in the deaths of more than 200,000 people and the displacement of close to three million people since 2003. Last year, the Canadian International Development Agency donated $1.5 million to relief efforts of the International Committee of the Red Cross in Sudan. One vital initiative, given unreliable postal services and cellphone networks, involves tracking down and delivering messages to family members separated or cut off from one another by the war. Each month, the ICRC in Sudan receives up to fifty tracing requests for missing persons and carries up to 2,000 messages in and out of the country.

Greetings. I am so happy to be able to hold pen and paper in my hands and write this message. How are you? We ask God that you are fine and in good health. The only thing we miss is seeing you. It has been a long time since we heard from or about you. I’m writing this Red Cross Message because we don’t have any means to communicate. Pass my greetings to all your sons. Thanks.

This is one of two messages from a camp south of Nyala city in Darfur to reach Adam Ibrahim El Hag, the owner of a construction company in Khartoum, Sudan’s capital, 900 kilometres away. “They found my relatives in the middle of the mountains!” El Hag cried, his eyes beaming behind large red-framed glasses, as the ICRC field officer handed him the notes. After reading them, he sat at his desk to reply.

In the name of God, the merciful, the compassionate. My respected uncle, I hope that this message finds you in good health and that the whole family is happy and blessed. All the family members in Khartoum are okay and are asking about you a lot. And they ask God to make life easy for you and remove all your hardships. May peace be upon you.

In the name of God, the most merciful, the most compassionate. My sister, my best greetings. May peace be upon you, and the mercy and blessings of Allah. How have you been in this time that we have not met? God Willing, may you be in good spirits and health. We are also in good health and spirits. The only thing we are missing is to see you, my sister. I want to inform you that my daughter gave birth to a girl this year. We ask God to raise her in happiness. Thank you. My greetings to the whole family.

The woman who sent this message took refuge in the Nertiti camp for displaced people in West Darfur. Her sister travelled north to the Abu Shouk camp, where tens of thousands of people live in homes made of sticks and straw. Violence and rape are commonplace in the camps, even those monitored by the UN.

Rita filed this tracing request last fall, for a sister who was kidnapped from her village in southern Sudan over a decade ago, during the civil war that preceded the Darfur crisis of 2003. Angelina remains in the custody of her kidnappers, and her family worries she may no longer know her own identity.

I am in France (Europe). I hope you are doing well. I haven’t heard from you since 2006. My health is good. I am waiting to hear from you through the Red Cross (by mail or telephone). May peace be upon you.

Nour fled Tawila in North Darfur in early 2006, when government forces, in their hunt for rebels, started shooting people and burning houses at random. Leaving his sister behind, he walked for 48 hours without food, until he made it to the Chadian border. From there, he found a car to take him to Libya, and eventually made it to France, where he is currently seeking refugee status. Despite the Darfur Peace Agreement, signed a few months after Nour’s departure, conflict continues, and more people have disappeared. He’s written several messages to his sister, all sent in vain.

Hajer Yahya started looking for her mother after being released from the detention centre where she spent her first year in the UK. Now staying at a hostel, awaiting the results of her asylum claim, Yahya has no right to work and lives off handouts.

In the name of God, the most merciful, the most compassionate. I’m very happy to write you this Red Cross Message and find you in good health. I’ve sent you messages before, in November 2007, but I received no reply from you. Please send us my hotel management certificates, which are with Ramadan. Please ask him to translate them into English, stamp them at Tony’s and send them back to me through the Red Cross. Thank you to the whole family.

ICRC field officer Abdulferaj Mohammed delivered this message to Mukhtar Ahmad Ramadan in his mud house on the outskirts of Khartoum. Because Ramadan’s written Arabic is weak, Mohammed read to him. The note was from one of several relatives taking shelter in a camp in Kenya. Ramadan dictated his response.

Let’s All Be Neighbours on Will Wright Street 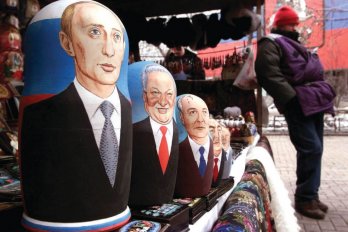 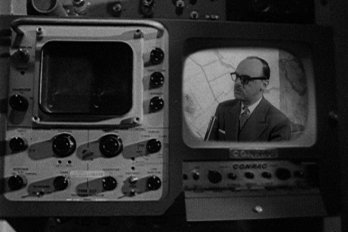 To NFB or Not to NFB