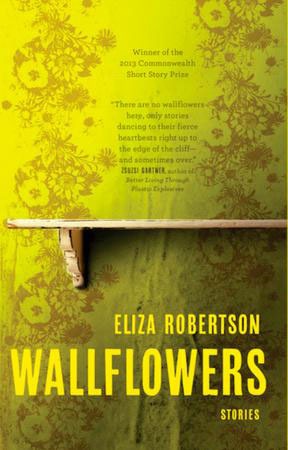 After my master’s degree in England, I moved to Marseille to let my hair grow. I lived with a Ukrainian woman in an apartment with stick-on floor tiles that peeled from the corners of the walls. I tried to not look at the corners too closely. Or the walls themselves, which were tacked with ribbed, oily paper. The apartment was ground-level: when it rained, slugs slinked under the gap in the door. These weren’t banana slugs from BC, but slimmer and nut-orange. Their trails shone in the glow of my cellphone when I walked to the bathroom at night. I used my cellphone for light so I wouldn’t need to touch the walls for the light switch. Irina carried hers for music: Beyoncé while she cooked or bleached her underwear in the bathtub. I always knew where in the apartment she was standing.

Every week, Irina boiled potatoes on Monday, Wednesday, and Friday. She peeled the potatoes into the sink and left the skins in the drain. I had to scrape the peels to the side of the basin before I could rinse my lunch plate. Because I washed my hair on the same days, I started to see the potatoes as her detachable body parts. The potato halves like heels she unscrewed from her feet, or milky lobes she plucked from under her knees.

She had, let’s say, certain ticks. She hid dish detergent in the cupboard, though I bought a bottle when I moved in. She kept her own forks and spoons in a coffee can, her own sponge in a plastic punnet for grapes. I used to leave spare toilet paper on the tank, but the rolls disappeared. I moved the pack to my wardrobe. Every morning, I carried squares to the bathroom with me like a camper. Most days, we did not speak. She knew English—I heard her on the phone with her boyfriend. But she avoided the common rooms. When she accidentally entered the kitchen while I cooked, she walked around me to the kettle, then circled out again. Once, I sat at the breakfast bar and ate my couscous as slow as I could. I read the newspaper. I tried the French crossword. When I left, her bedroom door opened as soon as I tugged mine shut.

One day I sliced eggplant for stir-fry. I had walked home from the market as it started to pour. The clouds blocked the sun like the pelt of a lint trap, and in the kitchen, horizontal rain smacked the window glass. Irina opened the front door with her pale hair slick to her cheeks. She walked passed the kitchen and switched off the light. She continued into her room. I paused. I could not see the eggplant well enough to guide my knife. I walked to the light switch and flicked it back on, then returned to my cutting board. I sliced eggplant. I would fry it with the garlic, ginger and cèpe mushrooms I found at the market. Irina entered the kitchen with her hair in a towel. She turned off the light. She opened the fridge and removed a pot of yogurt and set it on the counter with a spoon from her coffee can. She left the kitchen. I flicked on the light. She returned in a bathrobe. She sighed and turned off the light and switched on the kettle. I sliced my eggplant in the dark until the kettle boiled and she poured her tea and left with her yogurt.

I think I started to hate her. She is the only person I ever started to hate. The internet jack was in her room, and she turned off the router at night. I bought her black electric tape to cover the lights, but that didn’t work. I suggested she cover it with a blanket. She said the router was loud. I said routers don’t get loud. She said, This router was loud. She turned the internet off at ten thirty every night, which was her bedtime, and the time I wrote my emails. I lost approximately four emails.

Sometimes I came home and played music in the kitchen because there was no light in her window. But then I heard her voice on the phone, and realized she was sitting in the dark. Not to save bills. She showered three times a day, and every morning it rained, she turned on the heat. Even though the temperature was thirty degrees outside. I would turn off the heat, and go to my room. She would come out and turn it on. I would turn it off and stand behind my bedroom door and listen for her feet in the hall.

Eliza Robertson is the author of Demi-Gods and Wallflowers, published by Hamish Hamilton. She lives in Montreal.