Trudeau Could Fight Quebec’s Ban on Face Coverings. He Just Doesn’t Want To | The Walrus
Skip to content 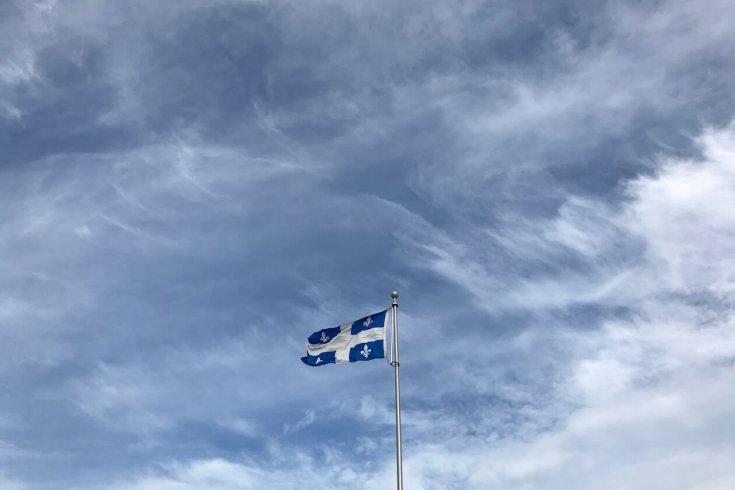 In March 2015, Justin Trudeau delivered a speech at the Royal York in Toronto that oscillated from inspiring to bombastic to schmaltzy. There is one point, however, he made forcefully. “The Charter [of Rights and Freedoms] might protect us from our government, but it doesn’t always protect us from each other,” he told the crowd. “Canadian liberty might be protected by the constitution, but it must be promoted by political leadership.”

But that leadership, today, appears in short supply. The aspirations Trudeau vaunted in that speech, hailed then as a brave political stance for the young leader, now seem to come second to the political reality he is facing in Quebec, with its introduction of Bill 62—a controversial religious-neutrality bill that will force citizens to uncover their faces while providing and receiving public services—a law drawn up to target Muslim women.

Trudeau’s words two years ago were a thinly veiled threat to Quebec premier Pauline Marois and Prime Minister Stephen Harper—currently, both out of the job—over their plans to limit the right of women to wear the niqab or burqa. “Those who would use the state’s power to restrict women’s religious freedom and freedom of expression indulge the very same repressive impulse that they profess to condemn,” Trudeau warned.

Harper’s ban on face coverings at immigration ceremonies was struck down by the courts, while his plan to enact a similar ban on federal public servants was thwarted by his election loss. Politically hobbled by the constant fighting against her own government—from within and from outside—Marois’s so-called “charter of values” never came into force. Even Marois’s own supporters appeared to be turned off by her party’s xenophobic messaging and iconography on the campaign trail.

Many thought the issue dead and gone. Few expected Marois’s Liberal successor, Philippe Couillard, to actually follow through on his half-hearted promise to adopt his own, weaker, values charter. Even after his government introduced Bill 62, many saw the plan to ban face coverings for both public servants and those seeking public services to be an unlikely priority for the Liberal government. Even its title seemed laughably improbable: An Act to Foster Adherence to State Religious Neutrality and, in Particular, to Provide a Framework for Requests for Accommodations on Religious Grounds in Certain Bodies.

And yet, the bill passed the Assembly National on October 18. The regulations putting weight behind it were introduced on Tuesday. Confusion has reigned over exactly what the bill does. It maintains that employees of government institutions—school board and hospital staff, elected officials, teachers, and bureaucrats—“must exercise their functions with their face uncovered” and that “similarly, persons receiving services from such personnel members must have their face uncovered.”

Once the bill, improbably, became law, does it now apply to Quebecers who ride public transit? Are women who freely choose to support religious garb to be denied welfare? Denied the right to marry? An attempt to clarify the bill Tuesday only heaped more confusion onto the pile. “This law affirms the religious neutrality of the state in order to assure respectful treatment of the rights and liberties of individuals,” contended the justice ministry in a release. The law would neither “favor nor disadvantage” a person due to their religious beliefs.

The ministry provided some examples. It reads that a bus driver “could demand that someone uncover their face in order to verify the validity of their transit pass if, per the regulations of the transportation society, it comes with a photo.” But, it adds, this wouldn’t apply to the Montreal metro, “where there is no interaction with an employee.”

At the doctor’s office, a patient will need to remove their face covering in order to communicate with the doctor, but they can remain covered in the waiting room. A student or professor cannot wear a niqab or burqa where communication is necessary between them. At a nursery, a parent must uncover themselves before picking up their child.

Montreal mayor Denis Coderre has said he will not apply the law. (Valerie Plante, his challenger in the ongoing municipal elections, has come out against the bill but has not said whether she’ll block its application in the city.) Demonstrations have started, with protesters wearing surgical masks and scarves taking to the streets. Yet that opposition is without real allies at the federal level. Sure, a line of politicians have stepped into the foyer of the House of Commons to deplore the law as racist, xenophobic, Islamophobic, dangerous for religious freedom, harmful to civil liberties, and contrary to Canadian values themselves. Yet not a single one promised to do anything about it.

Transport minister Marc Garneau, who represents a riding on the Montreal island, boasted to reporters this week that “we don’t believe that it’s up to us to tell a woman how to dress” but he affixed a caveat: “This is a law from the National Assembly. We will not interfere.”

Jagmeet Singh, the freshly installed federal NDP leader who gambled in his own bid for leader on calling out this Quebec’s legislation, has declined to take his criticisms further. He says he would stand opposed to the bill but would let Quebec’s own court system handle the challenges.

Even Conservative leader Andrew Scheer, now helming a party that had proposed a similar bill that would have been wider in scope than Bill 62, told reporters he’d avoid commenting on the bill, but, he added, “It’s not a direction I would pursue federally.”

Part of the reason? Even within the parties, there is a lack of unity.

But members of both the NDP and Conservatives have come out shyly in favour of the bill, citing Quebec’s independent status within Canada, religious neutrality, respect, security, or some combination of the four. Conservative MP Peter Kent told reporters that anyone providing or receiving services “should do so with an uncovered face.” NDP MP Pierre Nantel says the debate over religious accommodation has been happening for more than a decade: “It’s definitely time we move forward.”

Consensus hasn’t come easily in the National Assembly either. The three opposition parties all voted against the bill: the centre-right Coalition Avenir Québec and centre-left Parti Québécois because it didn’t go far enough; the left-wing Québec solidaire because they said it was incoherent. All parties in the assembly supported the attempt to ban the niqab or burqa for public servants in one way or another.

Only inside the Liberal Party’s caucus did there seem to be disagreement. A handful of members, mostly representing the diverse and multicultural Montreal area and obviously uncomfortable with attempts to legislate what women wear, have stood opposed to the bill. Couillard’s party, however, forced their hand and demanded their silence on the matter, according to local media reports and one National Assembly staffer.

That the Quebec Liberal Party is forging ahead now is no coincidence. A provincial election is a year away, and the other parties threatened to use Couillard’s inaction on religious neutrality as ammunition on the campaign trail.

From the political jockeying, one could conclude that the issue is a political holy grail. But that’s not entirely clear. An Angus Reid poll from earlier in October did show that eighty-seven percent of Quebecers support the bill. At the same time, the NDP and Liberals captured more than half the vote, combined, in Quebec while vocally opposing any sort of restriction on the niqab or burqa.

The fact is, there is a clear avenue ahead for fighting Bill 62, it’s just a matter of who steps to the plate. As many Quebec politicians have pointed out, the matter will almost certainly be heard in short order by the Quebec courts, which operate under the Quebec Charter of Human Rights and Freedoms, and likely not in the federal court.

Quebec, of course, remains a distinct society and a jurisdiction with its own political orthodoxy. Trudeau may be of it, but he does not govern it. And that, without doubt, is why he has kept himself at a distance. Even so, the Muslim women in Quebec who will be most affected by this law are still Canadian citizens, and that’s something the prime minister has made a special effort to point out in the past. By stepping back now, Trudeau is placing respect for Quebec’s special status within Canada over the rights of those women.

In 2015, a Quebec court told Rania El-Alloul that she would be forbidden from testifying so long as she wears her hijab. It was El-Alloul’s case that Trudeau specifically cited when he spoke at the Royal York. “Not without reason, she said that order made her feel as if she were not Canadian.” Trudeau compared efforts to extend that sort of ban to the attitude of “none is too many” directed towards Jewish refugees during the rise of Hitler. His rhetoric was severe. A year later, the Quebec Superior Court, citing the Quebec Charter, agreed with El-Alloul—the trial judge should have never ordered her to remove her hijab.

Not every decision by the Quebec courts agreed with religious minorities’ rights to wear their garb of choice. In 2016, a Quebec court upheld a ban on turban-wearing truck drivers, who do not wear hard hats, imposed by the Ottawa-owned Port of Montreal. Similar judgements have cropped up across the country. The Quebec court found that while the ban may be discriminatory under the Quebec and Canadian charters, it is justified.

Which leads to the inescapable problem of Trudeau’s soaring rhetoric but lack of concrete action. The Canadian government, however, can act. A challenge to Bill 62, filed to the Quebec Superior Court from the Attorney General of Canada, would be a loud statement. Even announcing intention to join another organization’s lawsuit would be forceful message in opposition to the law.

While no national leader has made the case for intervention, the prime minister hasn’t ruled it out entirely. Speaking to reporters on Wednesday, Trudeau trumpeted the Canadian Charter once again. “We’re looking very carefully at what tools we have,” he said, “and what steps we have to make sure that we make this situation better for everyone.”

Trudeau’s talk of human rights were core to his message when he hit the campaign trail in 2015. He has made a grand display of admonishing any political rival who falls offside of his standards of upholding individual liberty. He has held aloft the Charter as not the gold standard but as the bare minimum.

And yet, on his first big test, Trudeau seems unsure of what to do.

Mark Carney Was the World’s Rock-Star Banker. Now He’s Ready for His Encore