Tough Lessons | The Walrus
Skip to content
Reflections on a popular teacher with a dark secret. Do tighter sexual abuse laws help or hinder students?

GGrowing up in the ’80s in Springbank, a rural suburb of Calgary, my favourite junior high school teacher was Fred Archer. He was the guidance counsellor and basketball coach, and my first adult confidant. My friends and I ate lunch in his office and begged rides home in his tan AMC Pacer (we didn’t care what kind of car he drove, as long as we didn’t have to take the bus). He pulled me up off the turf when I went down hard playing flag football; taught me the art of apology when I heartlessly called a female classmate “Moose”; and made an unexpected house call after I had my tonsils removed. Archer was the first person outside my family whom I could count on, a man who never broke my trust.

Meanwhile, as he helped to mould me into an upstanding citizen, he was sexually abusing three of my male classmates. In 2008, he was convicted on historical charges dating from my time as a student. Between these incidents and the laying of criminal charges, he continued teaching for over twenty years, apparently without further transgressions.

On the morning when the news of his arrest broke, I was surprised that I hadn’t seen it coming. I recalled his hand rubbing my bare skin under my T-shirt, the “boys only” rides home. He would take us into town to buy junk food before he dropped us off, each at his own house. Since we lived in a community of acreages, the last boy always rode alone with him in his car on a quiet country road; simple geography ensured that I was dropped off first. In hindsight, his behaviour seems totally inappropriate, but no one felt concerned at the time. Even my mom, who always considered him “a little bit funny,” never thought much of it. Archer always treated me kindly, and he had a stellar reputation. “He was like the Pied Piper,” says Jim Weed, our principal at the time. “He couldn’t keep the kids away.” 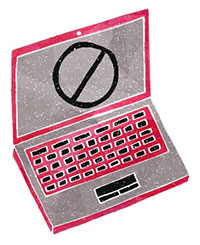 In 1996, three female graduate students in New York University’s interactive telecommunications program launched gURL.com, an online corrective to traditional teen mags. “Adolescence is about trying to define yourself,” said co-founder Esther Drill. “Most of the magazines aimed at teens don’t encourage them to be themselves. Instead, they’re trying to sell cosmetics or whatever.” The site offered an anonymous, welcoming space where teen and tween girls could discuss issues they felt uncomfortable approaching their parents and teachers with: sex and dating, body image, abuse, divorce, and other touchy matters. Users could interact and ask the site’s contributors for advice. In 2000, the US Federal Trade Commission enacted the Children’s Online Privacy Protection Act, which required websites to obtain parental consent before collecting information about children under thirteen. But the logistics proved costly and complicated, so gURL banned preteens from its interactive features—excluding a sizable chunk of its readership. “Twelve-year-old girls simply do not have a voice in the offices of the FTC, or in the boardrooms of corporations like the one that owns gURL,” explains Laura Laytham, former gURL director of technology. “While these twelve-year-old girls most likely face the same problems as their thirteen-year-old peers, their resources have been limited under the guise of privacy protection.”

As Weed admits, school administrators weren’t so vigilant twenty-three years ago about the threat of sexual abuse. This started to change in 1984, when the Badgley Report, commissioned to determine the scope of child sexual abuse in Canada, found it to be much wider than previously imagined. Four years later, and largely as a result of these findings, Canada’s federal laws regarding such cases underwent a major overhaul, to expand the definition of abuse and remove time limits on reporting old offences.

In 1996, Sault Ste. Marie teacher Ken DeLuca pleaded guilty to fourteen sexual offences involving thirteen victims. His crimes took place from 1972 to 1993, in numerous schools. Although students levelled multiple accusations against him, the school board failed to document them comprehensively. School authorities dismissed many of the charges out of hand, and some students were threatened with expulsion or legal action for coming forward in the first place. His case prompted the Ontario government to order a judicial review, to make sure such an egregious oversight never happened again. In the aftermath, Ontario professionals working with children faced fines of up to $1,000 for failing to report suspicions that a child was being abused or was at risk. In 2008, that fine was upped to $50,000 and two years’ imprisonment—or both. The police have the authority to arrest a teacher based on a single accusatory statement—and, as per the 1988 changes, a teacher can be convicted with little corroborating evidence.

Tighter legislation reflects mounting anxieties, which I as a parent understand. In the weeks after the allegations against Archer were first reported, I sized up every man who interacted with my two sons, who are five and two. Neighbours, friends, relatives, and shop clerks were all suspect, but I reserved most of my scrutiny for the few male teachers at my elder son’s elementary school. I questioned their motives for wanting to teach young children, and spent sleepless nights wondering how I would get my boys through school free of nefarious male authority figures. At one point, I thought I could micromanage their lives so all of their teachers would be female, and make male-dominated team sports off limits. My response, however unreasonable, is hardly abnormal.

But such paranoia can infect the learning atmosphere. In 2008, after a twenty-month ordeal, Quebec elementary teacher Henry Fournier was cleared of thirty-eight charges of sexual touching, after the children who accused him contradicted one another’s testimony. He was welcomed back to work, but quit after four days because he couldn’t bear interacting with his accusers. The same year, a report from Nipissing University in North Bay, Ontario, found that 13 percent of male teachers have been falsely accused of inappropriate contact with students. Teachers’ associations across the country have drafted recommendations to help members avoid the spectre of false charges.

Unfortunately, if followed to the letter these recommendations also create a significant distance between teacher and pupil. The positive impact of close student-teacher bonds is well documented; a 2011 report from the American Psychological Association reports that “if a student has a personal connection to a teacher and experiences frequent communication with a teacher… then the student is more likely to become more trustful of that teacher and show more engagement in the academic material presented, display better behavior, and achieve higher levels academically.” Archer was one of the few teachers I knew growing up who took a personal interest in his students, and this is what made him such a magnetic figure.

I worry about the effects of over-regulation on my kids. I want them to grow up having positive relationships with their teachers, and healthy bonds with adults when they need their support. My good memories of Archer are trivial compared to the lifelong turmoil he caused his victims, but, despite his behaviour, he helped develop my self-confidence at a time when I needed it most. In the end, the only thing that could have spared his victims wasn’t school policy, but rather his conscience.