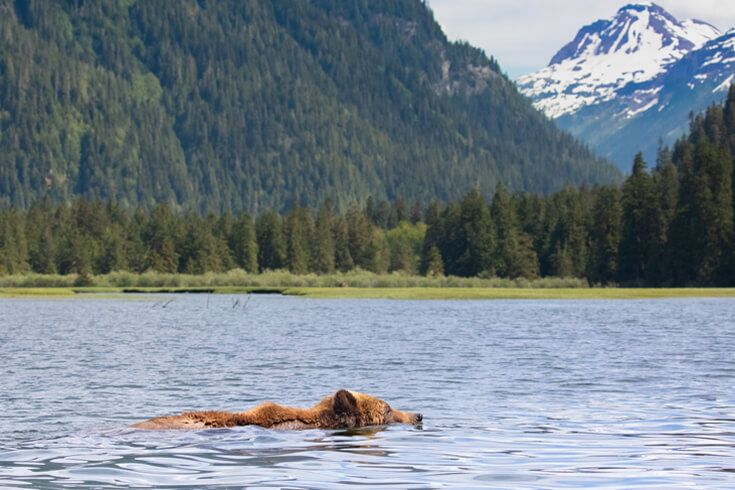 Ernie Tallio has seen a lot while patrolling his community of Bella Coola, BC: he’s rescued swamped kayakers, recovered bodies, and protected sacred sites. As a Nuxalk Guardian, Tallio relies on a boat and a truck owned and maintained by the Nuxalk First Nation, a salary to feed his family, and gas to get him out on the land. Those costs—and those of guardians and staff in fourteen communities throughout the Great Bear Rainforest—are partially paid for through a complicated scheme intended to put a price on the protection of land.

But a carbon-offset project developed specifically to fund the protection of the Great Bear Rainforest is struggling to find buyers. In fact, the only reliable buyer is the provincial government, which set up the BC carbon market in the first place. The papers that established the BC Forest Carbon Offset Protocol were signed in 2008, and the first credits hit the market in 2012, to great fanfare. Sales of BC carbon credits, however, have not even come close to living up to expectations.

“When the whole carbon market was started in BC, everybody thought that these tonnes [of offset carbon] were just gonna fly out the door,” explains David Oxley, an administrator at Coastal First Nations. Everybody, it turns out, was wrong.

“I don’t think it could be described as a home run right now,” says Phil Cull, CEO of NatureBank, a reseller of the credits. As much as $25 million in unsold carbon credits (around 1.9 million tonnes) are sitting on the metaphorical shelf. Some date back to 2013, the second year of sales—and they don’t keep forever. While they don’t exactly expire, carbon credits can lose their value over time. “As they get older—as they’re from older vintages—they’re often not eligible to be used in certain systems and are less valuable over time,” explains Joseph Pallant, director of climate innovation at Ecotrust Canada.

This means that funding for a lot of the protection of the Great Bear Rainforest—the world’s last remaining intact temperate rainforest—is under threat. About a third of the revenue that funds activities like those of the Nuxalk Guardians comes from carbon credits, according to Brodie Guy, executive director of Coast Funds. “You can see how important carbon credits have become in terms of revenue,” Guy says. “It’s funding they use on all these soft costs that are vital to permitting, monitoring, stewarding their territory.”

Slow carbon-credit sales, Guy says, mean the general revenue pools are much smaller than what is necessary to fund the breadth of work being done on the coast. It’s been a mounting concern for coastal First Nations and the NGOs they work with for the past two years. “It puts the whole framework of what they’ve done over the last ten years in jeopardy.”

Carbon offsetting is a simple concept that gets complicated as soon as it hits the real world. Think of it this way: you burn a litre of gasoline getting your car to the store and back. That releases a stream of carbon dioxide, which contributes to climate change. If you want to reduce that impact, you have two choices: don’t drive your car, or offset the impact of the emissions you did release by planting a tree. The tree pulls carbon from the air and stores it.

A carbon market is a system for putting a value on the emissions we produce and supporting projects to reduce them—things like tree planting, building wind farms, or in the case of the Great Bear Rainforest, supporting stewardship instead of logging. It can work either voluntarily, with people or companies looking to do good, or by regulation, with the government setting a cap on emissions. Companies exceeding that cap then pay others, who are emitting less, so that those extra emissions are offset and overall levels stay on target.

In its 2008 climate plan, the BC government pledged it would offset all of its own emissions to become the first carbon-neutral jurisdiction in North America. It achieved that, arguably, beginning in 2011. That was seen as laying the groundwork for a bigger cap-and-trade system. “The carbon neutral government was supposed to be the first step in BC adopting cap-and-trade regulations,” Cull explains.

The cap-and-trade system would have provided a massive new market in which the credits could have been sold. “Demand would have been in the millions or tens of millions of tonnes, right out of the gate,” Pallant says. Each of those tonnes can be worth as much as $15 to a buyer.

But the system never happened. In 2011, under premier Christy Clark, the BC Liberal government abandoned the cap-and-trade plan, meaning all the offsets generated in the Great Bear Rainforest are either bought voluntarily or bought by the provincial government. The provincial government buys about 600,000 to 700,000 tonnes of carbon offsets each year to account for what it generates in emissions. The Great Bear Rainforest, however, produces much more than the province needs. It’s currently sitting on 1.9 million tonnes of unsold “inventory,” or credits.

“Collectively, the Great Bear projects generate more carbon offsets each year than the province can reasonably purchase under the carbon-neutral government program,” a spokesperson for the Ministry of Environment and Climate Change Strategy wrote in an email. Meanwhile, demand from the voluntary market (the do-gooders who want to offset their emissions) hasn’t kept up with supply: a 2017 report from Forest Trends found that the total worldwide value of offsets sold had fallen steadily, reaching just a third of its 2011 value by 2016. Demand in the voluntary market shrank by 24 percent between 2015 and 2016 alone.

When the project was first announced, the belief was that everyone would want to buy their carbon credits from the Great Bear Rainforest because of its worldwide appeal. “We’ve got a great story behind the tonnes,” Oxley says. “When you buy our carbon offsets, we can tell you exactly where the money is going.” Guy agrees the region has major cachet. “The Great Bear is a model of Indigenous self-government and stewardship that’s known around the world,” he says.

But, in setting up the project, the BC government made a decision that some have blamed for the lack of international interest.

Carbon markets are a relatively new thing, and as a result, they can be plagued by mistrust. Buyers are often paying someone to not do something, like to not cut down a stand of trees. That requires trust that (a) the trees exist, (b) the trees would have otherwise been cut down, and (c) the person will in fact not cut down the trees after the deal is done. Beyond this, parties also have to determine exactly how much carbon was spared in the process. So, naturally, there have been carbon-offset scams in the past.

Third-party verification systems have been set up to audit the claims made by offset projects and bring some trust into the system. One, the Verified Carbon Standard (VCS), has emerged among the most trusted, and it has a protocol that could have been applied to the Great Bear Rainforest. “Corporate voluntary buyers are much more comfortable with VCS as a standard,” Cull explains.

But, anticipating a cap-and-trade market that never arrived, the province created its own standard, the BC Greenhouse Gas Emission Offset Protocol. The result is that it’s more complicated and time-consuming to verify offsets, making them much less attractive to big buyers. “We’ve talked to some purchasers in the States, and they don’t want to buy carbon offsets that aren’t clean and unquestioned,” Oxley says.

Pallant disagrees with the interpretation that the province went wrong in setting up its own system instead of adopting an existing standard. He points out that all governments developing cap-and-trade-compliance systems build their own standards and protocols rather than utilizing a voluntary offset standard. Using a tailored system is the standard approach, he says. “It wasn’t really a decision that could go another way.”

The province has subsequently created a way of linking its credits with the VCS for buyers who prefer that standard.

Pallant also points to the lack of a cap-and-trade system, the demand it was supposed to create, and the general decline in demand for credits on the voluntary market. That lack of demand was exacerbated in this case, he says, by a skepticism from environmental organizations toward forest-based offsets. A 2008 report from the Pembina Institute and the David Suzuki Foundation ranking different kinds of offsets put forest-based offset programs in five of the bottom six ranks out of twenty. None were given a “strong performance” rating. “People didn’t think nature should be commodified,” Pallant says.

To people like Tallio and his crew, these offsets aren’t just jargon. They’re a system to fund jobs that have real value to their communities. They have saved lives across BC’s central coast.

Carbon-offset revenue also allows First Nations to apply for matching funding from philanthropists and government agencies, opening up even larger new potential revenue streams. So it is critical for the communities that they find buyers.

But one possible buyer presents a paradox for the environmentally conscious: liquefied natural gas. The giant LNG Canada terminal being built in Kitimat, BC, is going to generate huge carbon emissions—around 3.45 million tonnes of carbon dioxide equivalent per year in its first phase alone, doubling or tripling in its final state. One way for the carbon behemoth to slightly reduce its impact would be to buy up offsets, protecting rainforest in exchange for its huge carbon output. Cull says the government is considering that.

Both Pallant and Oxley expect the Paris accord to be another source of new interest. Companies will have to account for their emissions starting this year under the agreement, and many are beginning to look for a way to offset their emissions in the voluntary carbon market. The Canadian government is also setting up its own federal offset standard.

Meanwhile, some of the world’s most recognizable brands have begun voluntarily offsetting their own emissions. Microsoft is buying carbon credits to offset its emissions retroactively, all the way back to its founding, with the goal of being carbon-negative by 2030. Gucci claims it is now carbon-neutral. JetBlue is offsetting as well. “Voluntary offsetting is going up quite significantly,” Pallant says. “The interest is picking back up.”

Oxley says he’s “quietly optimistic” that things will start to pick up and carbon credits will start to move off the shelf. If they do, guardians up and down the coast will be able to breathe a sigh of relief. “The work that it’s supporting,” Oxley says, “it just makes it all worthwhile.”

This story was originally published in The Narwhal. It has been reprinted here with permission.

Jimmy Thomson is a freelance journalist based in Victoria, BC. He has worked as a CBC videojournalist and has bylines in The Narwhal, the Globe and Mail, Toronto Star, Canadian Geographic, Hakai Magazine, National Geographic, and elsewhere.