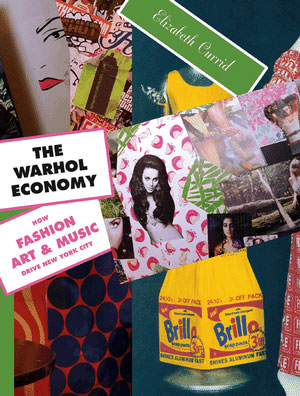 In his influential book The Rise of the Creative Class, new Torontonian Richard Florida claims that urban bohemia serves to attract and magnify affluence. In The Warhol Economy: How Fashion, Art, and Music Drive New York City, Florida acolyte Elizabeth Currid takes this one step further: New York’s powerful economy is crucially driven by the artists, musicians, and fashion designers who continue to thrive there, every bit as much as by the throngs of suited bankers and lawyers on Wall Street.

Through scores of interviews with people ranging from Diane von Furstenberg to graffiti artist Futura 2000 to the members of the band Clap Your Hands Say Yeah, Currid seeks to understand how the cultural economy actually works. The worlds of art, music, and fashion in New York are closely interconnected, she points out, so cultural producers often frequent the same bars, clubs, and parties, and those contacts both inspire them creatively and establish enduring business connections. “The cultural economy is most efficient in the informal social realm and social dynamics underlie the economic system of cultural production,” Currid writes.

The creative vitality of New York has always depended upon easy access to these social networks. “Art and culture thrive in almost bifurcated economies,” Currid says. “They are most creative when rents are depressed, gallery space plentiful, and gatekeepers and fledgling artists are able to engage in the same spaces.” And as Currid points out, in cities like New York—the same could be said of Toronto—the stratospheric cost of living is in danger of destroying that delicate and generative balance. With that in mind, she recommends that city governments, arts agencies, and urban planners focus on facilitating the conditions under which a vibrant arts community can thrive. By not doing so, we risk turning our great urban centres into high-rise deserts, and in the long run undermining their role in the global economy in an era when creativity is increasingly valued.

All Our Sisters: Stories of Homeless Women in Canada by Susan Scott 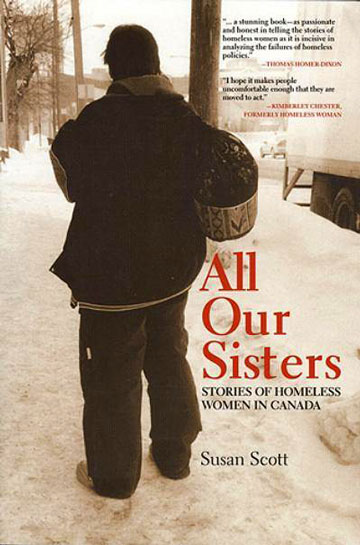 Walk a mile in their shoes, goes the old adage, wisdom that former Calgary Herald reporter Susan Scott repeats in the introduction to All Our Sisters: Stories of Homeless Women in Canada. But Scott does more than trace the steps of Canada’s homeless women—she talks to them, in coffee shops and at shelter lunchroom tables. Her reporting is mostly devoid of the maudlin moments that others, fascinated by the urban underbelly, cannot resist. She makes us feel the female perspective on poverty and homelessness, then attempts to get at the political root of the problem.

The book is composed of discrete portraits of thirty-nine women in cities from Vancouver to Ottawa. Scott recounts their life stories, mapping narratives without passing judgment. It is sometimes difficult to tell which city she’s reporting from, as the book is organized by topic—addiction, mental illness, foster care, and prostitution among them—rather than place. But the collective voice is a compelling one; homelessness becomes the main character.

Most notable is Scott’s insistence on extracting insight from the unlikeliest of sources. Barb, a forty-nine-year-old former homeless woman with multiple personalities, emerges as one of the most self-aware, articulate, and reflective women in the book. “You have to give us back the hope we may never have had,” she says, summing up the challenge policy-makers and social service workers face: the near-impossibility of teaching “new coping skills” to women whose indifferent or abusive families never prepared them for the world. Instead, they’ve learned to self-medicate away their traumas, finding acceptance only on the streets.

Scott ultimately recommends Mavis / McMullen Place, a co-op housing development in Vancouver’s Downtown Eastside, as a model solution. But as she explains, the book is only meant to be a springboard to further research and reform. It’s a beginning, with a much-needed focus on the female perspective. 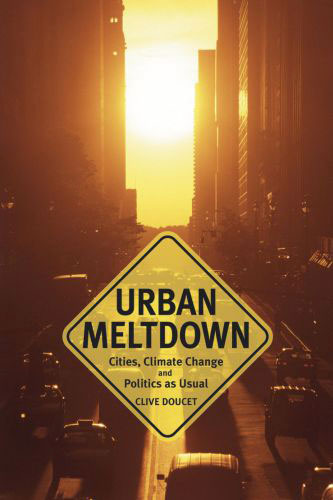 When Clive Doucet won a seat on Ottawa’s city council in 1997, he was a poet with no experience as an elected official. In Urban Meltdown: Cities, Climate Change and Politics as Usual, he brings to bear on the problem of global city development a sharp outsider’s perspective and the gift for expression that endeared him to voters. Following from his basic premise that the modern world is predominantly an urban one, Doucet argues that our gravest problems—including global warming and social disenfranchisement—are predominantly city problems.

Throughout the book, he takes Ottawa, with its clogged roads, suburban sprawl, and air quality warnings, as emblematic of urban mismanagement. His most forceful claim is that by ignoring cities’ needs and not properly distributing tax dollars to them, federal governments must share the blame for city problems. He cites New Orleans as the most obvious example of this disconnect: the US government ignored clear warnings about the city’s aging levees while spending billions on homeland security.

Doucet has spent the past ten years making this argument and fighting for sustainable development in Ottawa, with some tangible results. And while the tone of his book is bleak, it does offer suggestions for action, ranging from the grassroots (supporting electric public transit) to the national (abolishing corporate funding for electoral campaigns).

The book’s main weakness is that it tends to get lost in trails of blame. Doucet points the finger at the war on drugs and the oppression of native groups, omitting some more salient urban issues. For example, he fails to address the world’s growing slums, described in apocalyptic terms in Mike Davis’s Planet of Slums.

Nevertheless, Urban Meltdown is an important, if frightening, read. When Doucet speaks from the firm ground of experience as city councillor, his sharply logical solutions to municipal problems seem both hopeful and achievable.

The Culprits by Robert Hough 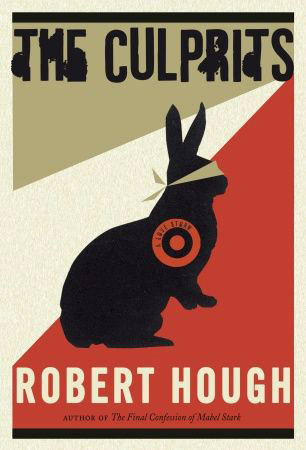 Strange hands push Hank Wallins—loner, computer operator, tinnitus sufferer—onto the tracks of a Toronto subway. He will scramble out of the way, narrowly escaping the train; he will try to give this survival meaning by finding an email-ordered Russian bride. But before all that, just for a moment, he hovers.

Later, in St. Petersburg, Hank learns “there was more than one type of hovering.” With her crossed eyes and curves, Anna bears a surprising resemblance to a French prostitute from Hank’s youth. Lovestruck, he implores her to come to Canada. Though hesitant to leave her city and ex-boyfriend Ruslan (who, incidentally, is a dead ringer for a local rock star), she complies. From there, The Culprits oscillates back and forth across the Atlantic, keeping up with Hank and Anna but never losing sight of Ruslan. Mistaken for a Chechen terrorist, he is subjected to mind-altering drugs and an array of tortures. Hough’s description here is unflinching, and these scenes are the novel’s most powerful.

Elsewhere, the author is at his best when exploring the current of tension that runs between two separate concepts—between fact and fiction, East and West, Toronto’s polite neighbourhoods and St. Petersburg’s corrupt underbelly. While the cover of The Culprits calls it “A Love Story,” Hough’s curious narrator insists at the outset this is a tale of death. Ultimately, it’s both, and the one plays off the other. Early in the novel, the narrator wonders, “Is there anything more enticing than contradiction?” Not when it drives a narrative so successfully.

Which is why it’s disappointing to find Hough stalled on certain simplicities. Hank’s good-guy persona could have benefited from a bit of contradiction. Also, the author proves too enamoured of his title. In the first hundred pages alone, we learn that, among others, “Demerol… was the culprit,” “low electrolytes were the culprit,” and “the culprit, of course, was the month of April.” Here, Hough is guilty of distracting from an otherwise compelling read.