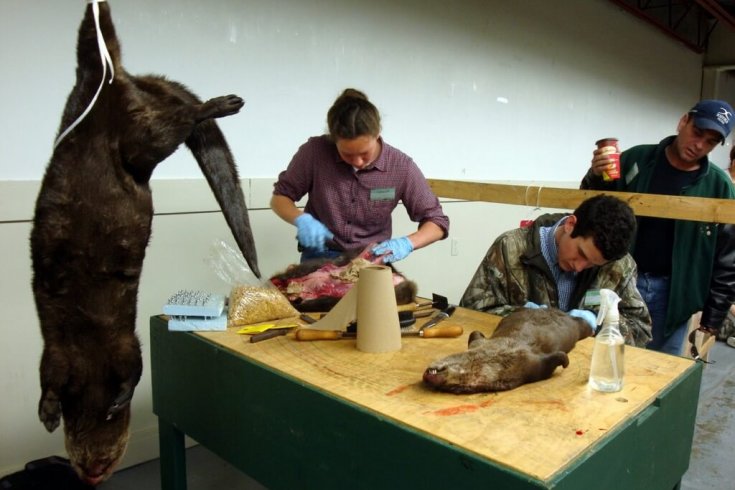 Her back against the wall of a chilly North Bay warehouse tinged with the acrid smell of death, Anna Rodgers pulls a piece of soft brown fur tight in one hand, gently paring away the membrane that joins it to meat. The twenty-three-year-old plugs a nick with paper towel, her lips pursed in concentration, as blood drips to the floor inches from her white runners. A handful of spectators snap pictures before shuffling along to the next station, where a woman twice Rodgers’ age is already nailing the edges of her pelt to a wooden board. Nearby, two others are just setting up. That makes a total of four competitors in the ladies’ beaver skinning competition at the nineteenth annual Trappers Convention, held by the Fur Harvesters Auction. Not bad for an industry plagued by thirty years of low prices, warm winters, and vitriol.

Trapping was once the economic backbone of Canada, as coureurs de bois and Hudson’s Bay Company clerks vied for beaver pelts then hugely in demand overseas. When European hatmakers discovered silk in the 1830s, the industry settled into the boom-bust cycle characteristic of natural resources—that is, until the modern animal rights movement raised ethical concerns about fur in the 1980s. Farming was considered more humane than trapping (because the animals are killed instantly, typically by electrocution or carbon monoxide), and Scandinavia cornered the new market, nearly doubling production of farmed fur. Canada still produces almost two million ranch pelts a year—twice as many as it does wild. The final blow came in 1991, when the EU banned imports of animals caught in leghold traps, forcing all but a few full-time trappers to hang up their Conibears.

That year, diehards from the bankrupt Ontario Trappers Association joined with the Union of Ontario Indians to form the North Bay Fur Harvesters Auction co-operative. Members’ pelts, almost exclusively wild, are bundled and sold on consignment (minus 11 percent commission) at four annual auctions. Nobody’s getting rich—beaver skins, for example, go for $18, $3 less than they did in 1972—but the nbfh has attracted enough hobbyists that ceo Mark Downey was in a position to ceremonially burn the warehouse mortgage papers at the convention, a fixture on trappers’ social calendars, in 2007. This year, Downey, who has the puffed-out chest of a seasoned auctioneer, strolls the aisles, glad-handing old pals and checking on the competitors.

A fresh crowd is gathered around Rodgers, who bears down on her pelt—now turned inside out over an upright wooden beam—scraping off the gristle with a two-handled blade. It will take her five hours to skin, flesh, and mount the beaver, roughly three more than her competitors. But then, the Algoma Highlands Conservancy intern was only introduced to the scene two years ago. “I’m in the bush all the time,” she explains, “so I figured I might as well trap in the winter and learn more about animals’ habitats and behaviour. It’s just so educational.” Commercial trapping is, in many cases, the preferred approach to wildlife management; skinning ensures the animals don’t go to waste.

She picked up most of her moves from her friend Gabriel Foley, an environmental studies graduate, who is competing today in the men’s otter category. In the middle of his event, as if to prove these conservationists are still the exception to the rule, a wiry man with white sideburns jutting out from under a camouflage cap walks over and mutters in his ear.

“Sure, I don’t see why not,” says Foley, handing him a knife. Methodically chewing his gum, the man spreads the otter’s legs and cuts out a purple sac of tissue and bone. “Thanks, son,” he says, dropping the anus into a small sandwich bag, which he then stuffs into his pants pocket. Come hunting season, he’ll poke holes in the glands on either side of the cavity, using the musky secretions to tempt coyotes out from the forest, for a better shot.

Like any convention of the maligned, this is a place to let your freak flag fly. It is a place where a man sporting a T-shirt that says, “To trap or not to trap, what a stupid question,” proudly leads a poodle sporting a rough-hewn fox fur cape, the orange back legs and tail dangling over the pup’s rump. A place where buffs fondle the latest in trapping technology—Duffer’s Raccoon Trap or the Lil’ Grizz Get’rz—invented in some backwoods basement. (Canada eventually won an exemption from the EU ban by mandating more humane traps, and a cottage industry was born.) A place where self-taught taxidermist Rick Smith’s wildlife display, a reconstructed forest housing over seventy-five stuffed animals, is a hit year after year.

Nail after nail, Rodgers secures the edges of her pelt along a circular outline sketched onto her wooden board. She may be competing for fun, but this is exactly how pelts are prepared for market, and the skills involved may soon become less marginal. About a decade ago, China took over fur processing from bankrupt European and Canadian manufacturers, selling to Russian retailers, and soon its own citizens, who share Russia’s long, cold winters and penchant for luxury goods. Today China purchases about 80 percent of the global supply of raw furs—largely farmed mink, which comes in a variety of colours—but North American pelt houses have started pushing wild as a natural alternative. At the nbfh’s last auction, buyers from Hong Kong and the northeastern city of Harbin, who donned lab coats to inspect the fur, were responsible for the majority of sales. “If the Chinese want it,” says Downey, “we can’t produce enough of it.”

Rodgers puts the finishing touches on her work, knotting an end of black thread where the beaver’s eye used to be. In short order, a veteran fur grader (who looks a bit like Beaker from the Muppets) is scanning the four gleaming skins stretched tight across boards propped side by side. “This one here,” he says, pointing to the third in line, “the pattern is completely oval; she’s followed the rings, okay? Her nails are spaced perfectly apart. And she has the legs, the ears, the eyes all sewn, you know? She’s a winner.” That evening, a beaming Rodgers accepts her award.

Although the EU champions it as a humane alternative to trapping, fur farming can be just as problematic. In 1905, five muskrats—Canadians, by one account—were released from a farm near Prague by a Bohemian nobleman with a fondness for hunting. By mid-century, the animals (known for their rapid, polygamous reproductive habits) had spread throughout Europe, where, like any introduced species, they wreaked havoc on the countryside. Their propensity for burrowing into dikes has made them an official security threat in the Netherlands, where hundreds of thousands per year are now trapped as a population control measure. Most of the captured “water rabbits,” as they’re known in Dutch, are disposed of as waste, although conscientious Netherlanders enjoy them cooked. One recipe, which calls for rosemary, cumin, and celery leaf, advises “catching them yourself or having your dog do it.”