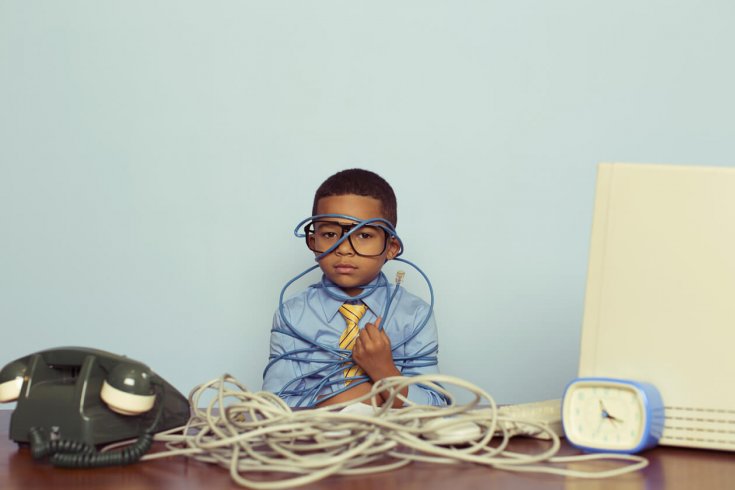 I can see how it would be unsettling to be laughing with your friends, far from the eyes and interruptions of the adult world, when suddenly your mother takes over your computer screen and demands that you call her. What is it like to be a teenager whose mom knows how to remotely turn off your technology when you refuse to answer your phone, text, email, and FaceTime? Keep in mind, I’m the person who fixes my teen’s phone when they can’t figure out why their apps have disappeared. I’m the person who set up a Tumblr for them to upload the stop-motion videos I also taught them how to do. And I’m the one they’ll will come to when their first job requires them to learn the latest software.

It’s a common stereotype: if you need to figure out a new piece of technology, you hand it to the youngest member of the family. The media has been publishing articles about adults’ apparent tech ignorance for nearly two decades. In 2000, the Economist claimed the “family tech guru” was “far more likely to be a teenager than the father of the house.” Perhaps they should have checked with the mother, because that’s never been true in my house, where I live with my husband and sixteen-year-old kid.

On a typical day, I’ll play World of Warcraft, integrate new software onto our myriad machines, remind everyone to back up their files on the external hard drive, and explain the cool factor of new apps. A few years ago, I even bought my kid a Raspberry Pi as—I thought—a cool entry into building a computer. My kid didn’t find software as exciting as I did, and I ended up programming it myself, then sending it to another parent in Montreal to try the same thing with her kid. I’m convinced that I’m not the only nerdy parent out there who knows more about (and is obviously more interested in) technology. In fact, I don’t think my kid’s lack of tech savvy is at all unique among the younger crowd.

It wasn’t always this way. Like many kids growing up in the 1980s, I knew more about technology than my parents and would, with a condescending sigh, reliably fulfill my role as the household’s tech genius. Starting at age seven, I set up the VCR to record my mother’s favourite soap, Days of Our Lives, and by age twelve, I was the one who dutifully programmed the big-box answering machine. I remember my mom’s promise in the face of my technological superiority: someday, my child would supplant me the same way. That may have been a defence mechanism on her part, or it may have been what she actually believed, but the day I started programming in DOS is the day when my child—still fourteen years from being born—started to lose footing in my mom’s prophecy.

The assumption of generational supremacy over technology tells us that the generation born in the mid- to late nineties (sometimes called Generation Z, sometimes post-millennials) grew up with the internet, cell phones, and a laptop for every lap and is, therefore, “intuitive” about new technology. This generation is, presumably, intuitive in a way that I, as a member of Generation X, cannot be. But plenty of research contradicts the idea that young people are, as a whole, more digitally connected than us olds.

As a mother of a teenager and as someone who teaches first-year journalism to post-millenials, I can also tell you that my generation (the one that, to interact with technology, learned programming growing up) is distinct from today’s generation (the one that doesn’t need to). Like many of my peers born in the seventies, I learned how to program before website templates existed. Back then, content-management systems, like WordPress or Squarespace, didn’t exist. In the absence of all this, I learned how to do things myself. By the time I was in my late teens, I had programmed little games to share with my friends, and I spent every night on message boards gabbing with other like-minded nerds about everything from comic books to politics.

It’s true that ancient technology—like the rotary phone and the cassette recorder—pass out of knowledge for a reason: we don’t need them anymore. But I do wonder what else we lose when we stop being curious about how things work. And what happens when we use technology daily but have no earthly idea how it works?

Other than growing their own social-media following by checking to make sure their Instagram pics get the correct number of likes every morning, what are the kids building these days? What is their unknowable question they are trying to answer? All our supposed technological advancement seems to have removed two key traits in the experience of technology users: patience and curiosity. In many ways, these are probably the same trait. It takes time to work things out, to understand the structure behind a technology, and it takes curiosity to get lost in that chase. If you’re constantly looking for someone else to solve the problem (another app, another software, or your mom)—and worse, you’re finding it—then you lose the critical thinking that goes into solving the problem.

Consider the potential consequences of this: the first time I assigned my journalism students the task of uploading their written stories to their school-created blogs, I discovered that many didn’t understand how to do certain basic things. Some did not even know which account they needed to be logged into to access their blog. It took even more coaching for most to upload photos or, God forbid, an audio file.

I’ve spent much of my time as a teacher, both in and out of class, troubleshooting simple technological fixes. Some of these challenges rest in poor critical thinking, and some can be traced to a basic lack of understanding of how the internet and computers work. Ask a random teenager how they would put a video on the internet without YouTube or Instagram or Vevo and you’ll likely get a look of confusion. They may even express derision at the idea that they should at least be curious about how to do it. But how do you think the internet was built, young padawan? Because we were trying to answer the unknowable questions.

I’m not the first to notice that the predicted superiority of the younger generation is far from our present reality. In 2017, the journal Teaching and Teacher Education published a paper called “The myths of the digital native and the multitasker,” in which the authors conclude that digital natives do not exist. In fact, we all—young and old—could stand to improve our digital skills. The year before, a study by the ECDL Foundation, an international organization “dedicated to raising digital competence standards in the workforce, education and society” concluded that a significant portion of all age groups, including the generation that grew up with computers, lacks basic computer skills. More alarmingly, a 2013 study that assessed the computer- and information-literacy skills of 60,000 eighth graders from twenty-one education systems all over the world found that, even in Ontario, one of the best-performing regions, only 5 percent of students ranked at the highest level, which required using critical thinking while searching for information online.

People like me, who built websites back when < blink > tags (if you don’t know what these are, consider yourself lucky) were still a thing have an instinct for how programming language works and, more importantly, how the person who codes them thinks. If Gen Z seems like it has the instincts, it’s because we’re all literally building apps for them. That’s not instinct. It’s a learned habit—like a kid hearing a vibration sound and instinctively reaching for their phone. In its study’s conclusion, the ECDL Foundation called for more digital-literacy education in our school systems. I couldn’t agree more. We cannot assume that just because today’s kids and teens were born in an era when everyone can be famous on the internet, they understand the ramifications and power of the machines. We cannot assume they know how to use them or to create new ones. Which takes us back to the beginning: if you don’t answer your phone and it’s your mom calling, get ready for a technology takeover—because you might have grown up with it, but it answers to your mom.

Angela Misri is an assistant professor at Toronto Metropolitan University’s school of journalism and a former digital director of The Walrus. She is also the author of the Portia Adams Adventures and Pickles vs. the Zombies series. She writes about digital journalism, technology, politics, and pop culture for many media outlets.