The Prince and the Prophet | The Walrus
Skip to content 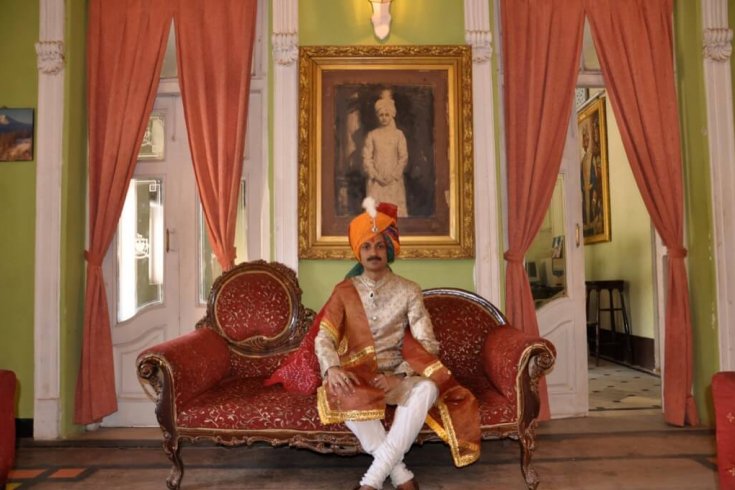 One summer evening seven years ago, I was at my home in Kumbheshwar, a village in western India surrounded by temples, when an old man arrived on my doorstep. He introduced himself as the secretary to Prince Manvendra Singh Gohil, gesturing to the young man standing beside him. Indian royalty, while stripped of its authority after partition, still commands respect, but his title didn’t impress me. He looked like a simple man, very straightforward.

While the prince sat quietly enjoying the scenery from my terrace, his secretary told me of the young man’s divorce from the princess of a neighbouring state. His family wanted to know when he would remarry; as the only crowned prince, he needed to produce an heir.

I am in no way a professional astrologer; I’m just very good at reading charts. By word of mouth, people come to me from Delhi, Mumbai, Bangalore, Kolkata, everywhere. Politicians come wondering if they will be re-elected; suspended police officers ask if they will keep their jobs; but for the most part men and women worry about marriage. The date, time, and place of a person’s birth can tell you where the stars and planets were aligned when they were born, and therefore much about future matches, but you must be exact.

As an Indian growing up in Kenya, I was always curious about astrology. But I didn’t have my first real experience with it until after I’d emigrated to Toronto in 1973. I was thinking about opening an Indian textile shop when I heard of an astrologer who also happened to teach English at a university in Gujarat state (where the prince lives). He was apparently never wrong. Based on his readings, I went ahead with the business and lost a lot of money. After this, I studied astrology more seriously, then read some charts for friends and friends of friends, and that’s how it started.

I eventually made my fortune selling janitorial supplies but called it quits when I turned sixty-two. What am I doing, I thought? I was tired and wanted a change of scenery. My wife and I considered returning to East Africa, but it wasn’t safe. Instead, we built a house overlooking the Narmada River, one of the most pious rivers in India. It was here that I sat with the prince and his secretary, gathering the relevant information for a reading.

It took maybe three hours to draw up the chart, a constellation of dots that represent the astrological elements. But one look at the position of his moon, and I knew his situation. I turned to his secretary and told him it was too late in the evening for me to do the reading. I asked if I could meet with the prince another time, alone.

A week later, he returned, this time with a friend. We left Sylvester at the house while we walked to a nearby temple, where I simply said, “This is your situation: your chart tells me that you are not someone who likes the touch of a woman, and if you don’t like the touch of a woman there is no question of another marriage.”

Manvendra was taken aback. Homosexuality is taboo in India; same-sex intercourse was only decriminalized in 2009. But after a moment, he said, “You’re right.” Only a few friends knew, and he was seeing a psychologist, who had broken the news to his parents when he couldn’t. They’d refused to accept it.

I told him, “You can talk to me about anything.” My wife and I are very open people, especially for Brahmins. After the reading, we went back to the house and discussed homosexuality with Sylvester, who turned out to be one of the few openly gay men in India at the time. Manu came out publicly in 2006, becoming the country’s most prominent gay rights advocate.

He and Sylvester have established the Lakshya Trust, an ngo that provides hiv/aids education to gay men in Gujarat, while I’m now helping him petition the government for unused land on which to build a hospice for those who have been infected. As well, Manu brings all his gay friends to see me to have their birth charts read. They want to know if their lives will be steady, if they will have children, if they will be married. Though they are gay, they still want someone to cook for them. “Don’t be stupid,” I say. “You’re gay! Don’t spoil a girl’s life.”

At seventy-six, I long for peace, but I cannot say no to requests for a reading. To deny them is wrong. But when we’re through, I also tell them, “You make your own destiny.”

The Catch-22 of gay nuptials in India

In India, where matrimony is often a social and family obligation, gay traditionalists have a choice: enter into a sham marriage, or face serious penalties—until 2009, homosexuality was punishable by up to ten years’ imprisonment or, in rare cases, life sentences. Most choose the former (an estimated 80 percent of gay men are married to women), but not all. In a much-publicized 1987 case, policewomen Urmila Shrivastava and Leela Namdeo were married in Bhopal with their families’ consent. When their superiors discovered their union, the women were forced to pack up their belongings, and then were “deposited at the Bhopal railway station in the dead of night” with a warning never to return to the barracks. The smoking gun? A photo of the couple garlanding each other, as is customary, after a ceremony presided over by a Hindu priest.