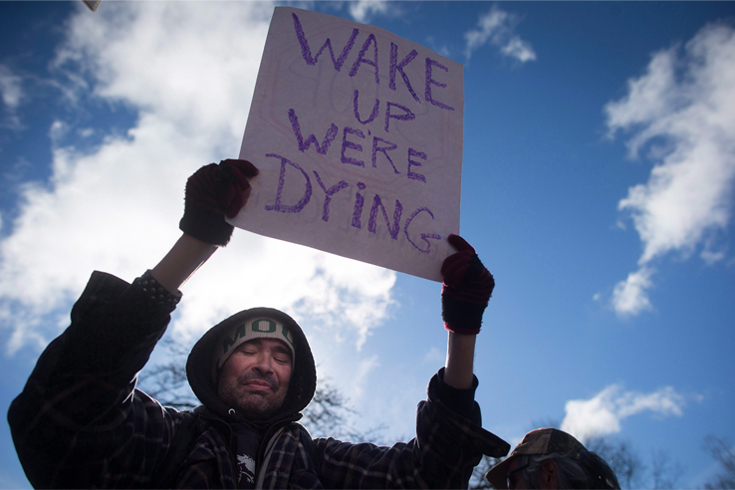 Randy Roberts has been using opioids since he was twelve. Now fifty-six, he’s lost countless friends to overdoses, including his children’s mother, two years ago. Roberts lives in Brantford, a southwestern Ontario city, which in 2017 ranked second in the country for overdose-related hospital admissions per 100,000 people. He founded, and now leads, the Brantford Substance Users Network, a group of active and inactive drug users who advocate for safer drug policy. After facing so much loss, Roberts says it’s too hard to go to funerals anymore. Each time the phone rings, he’s terrified his daughter might be next.

Constantly fearing for your health and the health of your loved ones is a reality everyone faces in a pandemic. It’s a reality that drug users know especially well and one that has become only more urgent since COVID-19 hit. Public health measures designed to contain the pandemic have worsened the situation for drug users, in large part by trying to protect the general population: border restrictions, lockdowns, and social distancing have disrupted the drug supply chain, forced people to use drugs in isolation, and limited people’s access to harm-reduction services. As a result, overdose deaths have spiked across the country. Efforts to stem one health crisis have exacerbated another, and in failing to consider drug users in its COVID-19 response, the government has put them at increased risk.

Unlike the coronavirus, there’s nothing novel about the opioid crisis. In 2016, following a four-year increase in overdose deaths in BC, the province declared a public health emergency. The rising death toll was largely due to the increased presence of fentanyl—a powerful synthetic opioid that can be prescribed as a painkiller in medical settings but is used on the black market to beef up other drugs. Fentanyl is fifty to 100 times more potent than morphine, and an amount equivalent to a few grains of salt is enough to cause death. Many who ingest it do so unknowingly.

While the opioid crisis has hit western Canada the hardest, other regions, like Ontario, have also experienced rising fentanyl-related drug deaths. Indigenous people have suffered disproportionately, partly due to the connection between intergenerational trauma and substance use. Between January 2016 and January 2019, 15,393 Canadians died from opioid overdoses. Last year, 77 percent of accidental opioid-related deaths involved fentanyl and fentanyl analogues.

Roberts has witnessed first-hand the harm that the opioid crisis has done to his community. He thought the pandemic might increase empathy toward drug users, who have been in the throes of their own epidemic for years. Instead, he feels as though they’ve been forgotten.

As COVID-19 cases and deaths have increased in Canada, so have overdose deaths—by some measures, much more dramatically. From May to July, BC recorded its highest-ever number of overdose deaths, with 526 drug-related fatalities in the three months combined—a 121 percent increase from the same time period in 2019. By comparison, as of August 20, 200 people had died from COVID-19 in BC since the pandemic began. BC First Nations people are dying at disproportionate rates: they have accounted for 16 percent of the province’s overdose deaths this year but make up only 3.3 percent of its population.

Other parts of the country have experienced similar trends. Over the past few months, Toronto paramedics have reported the highest opioid death tolls since September 2017, including a record twenty-seven deaths in July. Overdose interventions have spiked in Calgary, and Canada’s chief public health officer, Theresa Tam, has noted increased overdoses due to “unusual mixes of toxic illicit substances” in Nova Scotia and Ontario.

Canada’s attempts to curb one highly visible public health crisis have intensified another, often less visible one, and the hypocrisy of the trade-off is most evident to the people closest to it. “[The opioid crisis] is not even talked about anymore,” says Roberts, “and we’re dying by the hundreds.”

During the pandemic, health officials have ordered people to stay home and limit physical contact with others. The unfortunate reality of this directive is that, while social distancing is essential to stopping the spread of COVID-19, it’s at odds with one of the golden rules of substance use: never use alone. Health officials advise people to use drugs in pairs or groups so that, if something goes wrong, someone is there to call 911 or administer naloxone, a treatment for opioid overdose. In trying to observe social distancing requirements, drug users have been forced to use alone.

“It’s very lonely and depressing,” says Tania Pelletier, an opioid user in Toronto. Colloquially known as “Snickers,” she was homeless before the pandemic, but in April the city moved her into a temporary apartment in community housing, where she initially wasn’t allowed visitors. This past summer, Pelletier overdosed while taking drugs alone in her room. Thankfully, she woke up, but many aren’t so lucky. Isolation can be deadly, and it’s a common misconception that paramedics are the first responders for people who have overdosed on drugs. In reality, it’s often the people using alongside them who end up saving their lives.

In addition to increasingly unsafe using conditions, the quality of illicit drugs themselves has become a major threat to people’s health. Border restrictions imposed to contain the spread of the virus have disrupted the drug supply chain. Drug contamination was already a threat in Canada, but the threat has grown even more deadly during COVID-19. Judy Darcy, British Columbia’s minister of mental health and addiction, says that, during the pandemic, the BC coroner has observed extremely high concentrations of fentanyl and fentanyl analogues in combination with other drugs.

Ashley Smoke, a drug user and peer outreach worker at Moyo Health and Community Services, in Brampton, Ontario, says she’s never seen as many overdoses as she has during COVID-19. The unpredictable supply quality means that, one day, you can get drugs from a dealer that are completely normal, and the next day, a particularly strong batch from the same source can cause you to overdose. During the pandemic, Smoke has had to personally reverse two overdoses using naloxone. “I’m scared all the time,” she says.

On top of social isolation and an increasingly toxic supply, the pandemic has restricted access to harm-reduction services, like supervised injection sites, addiction counselling, and needle-exchange programs, putting users even further at risk. Supervised injection sites are safe, clean spaces where drug users can inject substances in the presence of medically trained staff. With the threat of drug contamination rising in recent years, supervised injection sites have been a key tool for overdose prevention. But, now, drug users are forced to choose between one risk and the other: forgo life-saving care and stay COVID-19-free or access crucial services and risk catching the virus.

Since 2003, when Insite, a supervised injection site in Vancouver, first opened, over 3.6 million people have visited to use drugs, and staff have reversed 6,440 overdoses. In April, Vancouver Coastal Health reported a 45 percent decrease in Insite visits compared to the previous three months. Meanwhile, overdose deaths in BC have skyrocketed. In some cases, harm-reduction services have had to shut down completely to comply with public health guidelines. Toronto’s busiest supervised injection site, The Works, closed for a month when the pandemic first hit and has since had to operate at lower capacity. It’s difficult for people to have these crucial supports abruptly cut off, and losing access to them can even trigger more drug use.

To compensate for this lack of access to services, governments and harm-reduction organizations are offering digital support instead. In May, BC launched an app called Lifeguard, which assists people who use drugs alone by automatically calling 911 if the user becomes unresponsive. The First Nations Health Authority just launched a virtual addiction, medicine, and psychiatry service for people in need. But digital services are restricted to people with access to a computer or phone and are not always an effective replacement for human-to-human connection.

Every day, before and during the pandemic, Roberts has to go to his local clinic to get methadone, an opioid medication used to treat addiction. Years of drug use have left him immunocompromised and therefore more vulnerable to COVID-19, but he still must leave his home to access the substance his well-being depends on. It’s hard to social distance at the clinic, and his doctor will not give him multiple days’ worth of medication. He wishes the government looked out for him like it does other immunocompromised people, such as the elderly and people with preexisting conditions.

Drug users are angry that so many people are dying and no one seems to care, angry that the government is capable of acting swiftly in the face of a health crisis—unless that crisis affects people who use drugs, who are stigmatized and often blamed for the challenges they face. For many of them, like Roberts, the anger really comes from a place of hurt. “We’re fighting an uphill battle just to be seen as humans,” he says.

Donald MacPherson, director of Simon Fraser University’s Canadian Drug Policy Coalition, says COVID-19 has proven that the government can heed public health advice and “move mountains” when it wants to. In the way that wearing masks and washing hands can do a lot to mitigate the spread of COVID-19, there are simple fixes to help the drug poisoning crisis too. Drug users, advocates, and public health experts are clear about what the government needs to do first: offer low-barrier access to a safe drug supply. By ignoring drug users in its COVID-19 response, the government is making an already dire crisis worse. And, by failing to act while simultaneously pouring unprecedented resources into another problem, Canada tells drug users their lives don’t matter.

COVID-19 has demonstrated the power of collective action to fight a health crisis. What’s missing in the fight against the opioid crisis is the same level of compassion. Nel Wieman, acting deputy chief medical officer at First Nations Health Authority, says we need to eliminate the stigma surrounding drug users. “For COVID, the messaging has been, ‘We’re all in this together,’” she tells me. “With the opioid crisis, the unspoken message is, ‘Glad it’s you and not me.’”

Alexandra Harvey is a Master of Global Affairs graduate and freelance journalist. She writes the Toronto Star’s morning newsletter, First Up.