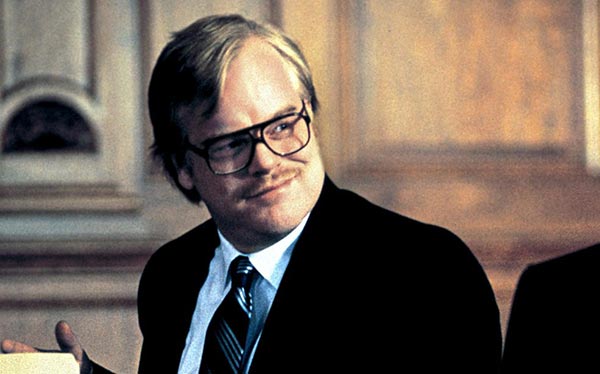 Before I watched Philip Seymour Hoffman play a character in a movie based on a book I’d written, and before I spoke to him about his craft, I imagined that acting was fairly straightforward—especially film acting, with its erasable takes. You feign being someone else. You imagine yourself into a story, a set of circumstances unlike your own. You memorize a script—verbal clues to this life you pretend to inhabit—and you recite it with all the conviction and consistency you can muster.

I met Philip in 2002, soon after he arrived in Toronto to shoot Owning Mahowny. Luckily, he saw me not as a journalist who would ask him a bunch of dumb questions but as someone who could give him insight into his character, a precocious young banker who was defrauding the bank to feed a gambling addiction. Philip flattered me by saying my book, Stung, helped persuade him to take the role; I wasn’t flattering him when I said that the film had been in development, off and on, for more than a decade, but came together only when he signed on. Even then, the acting world knew he was special.

In a hotel lobby, he asked me dozens of questions about Brian Molony’s background, his tastes, what he liked to eat. (Answer: Swiss Chalet chicken.) Then he asked how I’d sum him up in a sentence.

“Actually, believe it or not, I’d say he’s one of the most principled and trustworthy people I’ve met. Ten-million-dollar fraud and gambling addiction notwithstanding.”

Philip wanted to meet him. (Brian had pled guilty and received a six-year sentence, long since past.) Brian agreed, so Philip took a limo to Brian’s suburban office and spent three hours with him. I’d love to have been a fly on the wall as they took each other’s measure. I do know that both men came away intrigued and impressed.

The next time I saw Philip, later that week, on the set in downtown Toronto, he’d become a character—Dan, in the movie—that incorporated the actual Brian. It was uncanny. Philip’s shoulders had risen an inch. His gait had become splay-footed. His droopy moustache disguised his upper lip as he issued crisp instructions with a sort of exhausted confidence.

In the scene being shot that morning, he and Minnie Driver (his love interest) played off each other. Between takes, Minnie fussed over hair and makeup and costume while Philip sat in a corner, inviolable, staring at the floor. Take six: once again, she knocks meekly on his office door. “Dan, I’ve brought your coat.” It was like watching a minor-league hitter against major-league pitching.

A few days later a casino scene was being shot late at night. The set was a shabby hotel near the airport in Toronto. The entrance had been tricked out to resemble the casino entrance. On set, throughout the entire thirty-eight-day shoot, nobody could speak to Philip or make eye contact. He stayed in character during the interminable adjustments between takes, hands thrust into suit pockets, pacing back and forth in the lobby, using a forefinger to nudge his glasses up the bridge of his nose. He was in a bell jar; the crystalline air of concentration was palpable.

The same thirty-second scene was shot over and over again: Philip walking to a limousine where John Hurt, playing the sleazy casino boss, waited with ribs in a Styrofoam box. To each take Philip brought an almost imperceptible new inflection—a hesitation, a change in vocal pitch, a glance at the box. Then he hurried back inside to pace in silence, and concentrate, and wait. Hurt, meanwhile, chatted with crew members, sucked fiercely on a cigarette, and told funny stories about Ireland, where he lived.

By the time filming ended, at 3:30 a.m., everyone was exhausted. Shooting was set to resume less than seven hours later, in Niagara Falls, more than 100 kilometres away.

I visited the set again the following week. Seeing a film shot out of sequence (Minnie could spend only the first two weeks of principal photography in Toronto) makes you appreciate the focus that acting demands: we’re shooting this closing scene today, which means everything else has already happened, though we’ve not yet shot everything else. Philip’s grasp of the script, of emotional nuance, left at least a couple of the other actors in awe. Maury Chaykin, who plays a bookmaker in the movie, told me he’d turned down a major part in another film, against his agent’s wishes, because he’d have scenes with Philip Seymour Hoffman.

The party was at a cavernous place on Adelaide Street. Philip had promised we’d talk there, but all night he was surrounded by the crew, to whom he had plainly endeared himself. He was relaxed and upbeat and drank ginger ale. Drivers waited outside, and at midnight we shared a car up to Bloor Street. He apologized for not having chatted, gave me his number, and suggested I look him up next time I was in New York.

I did so, rather sheepishly, a couple of months later. When I called him and asked whether, busy as he was, he was still willing to meet for coffee, he said, “Of course. I don’t say things like that just to be polite.” We met at a little spot in Greenwich Village, close to where he lived, and again I asked him about his craft.

“The way therapy is hard work? The work of getting to the heart of things?”

“The thing is, if you don’t leave it all out there it’s not going to be very good.”

“How do you find in yourself so many different people?” I asked.

I didn’t understand his answer: “You have to look in the mirror every day and not be afraid of what you see.”

The last time I saw him, we met for lunch at another place in the Village. It was a muggy spring day. He arrived on his bicycle, wearing baggy camouflage shorts and a ratty orange T-shirt. He locked the bike to a lamp post. This was pre-Capote, before the best actor Oscar made him a household name. Still, many diners did a double-take as we sat down: I know you, I just can’t remember who you are.

His work on Owning Mahowny was complete. Since we’d last spoken he’d done some looping (redoing dialogue to match film that’s been shot) but he hadn’t yet seen the final cut. He asked whether I had.

“I had my own screening. I saw it in this big, empty theatre on Bloor Street at noon. Looking at rushes gives you no idea what to expect.”

“What did you think of it?”

Apart from the odd jolt—a moment of feeling that John Hurt was overdoing it, or that Minnie Driver was trying awfully hard to nail a Canadian accent—I’d been transfixed. I could barely answer. “Holy fuck,” I said. “I wept.”

Philip talked about the low-budget film his brother had written, Love Liza, in which he plays a character who, after being visited by grief, gets addicted to gasoline fumes. He was rehearsing a play with his off-Broadway company and preparing to fly to Los Angeles, a city he didn’t much like, for a film shoot and a good payday.

I asked about the differences between film and stage. He said that what happens onstage on a good night has no parallel, it’s the purest high, the tightrope artist making it all the way across while the crowd below goes “Oooohh.” I had a young daughter, and he asked what I liked most about being a parent. I said that having a kid has no parallel, it’s the purest love. He insisted on paying for lunch before discovering he didn’t have any money. Outside, he unlocked his bike and pedaled off, a circus bear on a bicycle, raising a hand without looking back.

There’s a scene in Before the Devil Knows You’re Dead in which Philip, who plays a psychopathic jewel thief, gets tied off and injected before delivering a woozy, zonked-out self-assessment: “All of my parts,” he says, “don’t add up to…one me.”

I remember asking him, just before shooting began on Owning Mahowny, what he’d found in Brian that corresponded to something in himself, something he could build on to create the character of a compulsive gambler.

“I had some pretty wild times when I was young,” he said. “I know how you can fool the people around you—even people who know you well—into thinking you’re okay. You can fool yourself, too.”