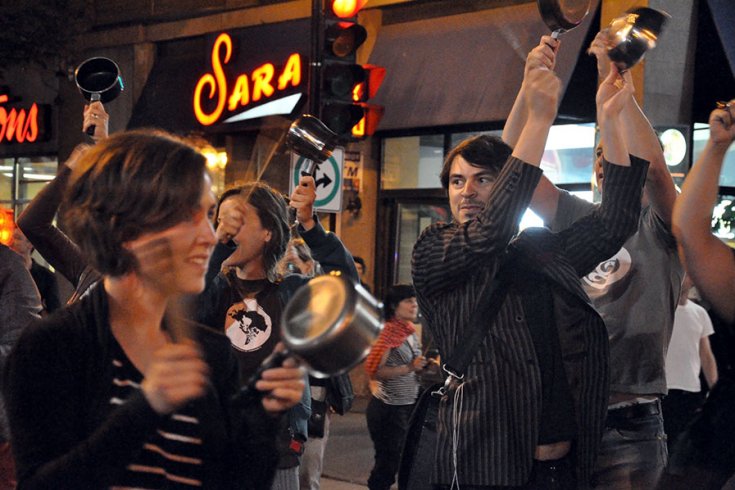 Protesters, or “casseroles,” bang pots and pans near Mont-Royal and Saint-Laurent.

On a warm Friday night in early June—one of the first that feels like summer in Montreal—a fast-moving crowd of thousands streams down rue Saint-Denis, waving placards and chanting, “Dehors Charest! ” The group is a surreal mixture of “casseroles” clanging pots and pans, people walking dogs, and masked demonstrators; the now-normal line of riot cops trails alongside. All down the street, restaurant staffers run outside and bang serving trays against terrace railings; patrons grab glasses and plates and clink spoons against them, smiling. Tonight you can almost believe that all of Montreal is on the students’ side.

The march reaches rue Sherbrooke Est, and I stop for five minutes to wait for Patrick DeDauw, who has been trying to catch up with the demonstration for several blocks. A night march regular, he belongs to a small but tenacious group of McGill students who began to strike on March 19. We find each other, then sprint a ways to rejoin the protest; “night demo speed,” as DeDauw calls it, is swift. We finally reach the protesters farther along Sherbrooke, where he runs into a friend. They chat for a while, catching up, as someone launches a few fireworks overhead. The crowd roars. Welcome to the printemps érable.

Why flex cuffs are a pain for protesters 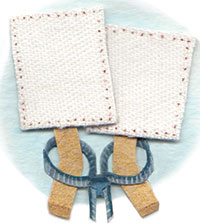 A year before plastic restraints were first used in the 1992 Los Angeles riots, the Canadian Police Research Centre tested a plastic carrier that would enable police officers to pack ten flex cuffs at once. Although the accessory was described as “comfortable around the waist area,” the handcuffs kept falling out during routine drills. This was a serious concern: if a cop dropped the cuffs during a struggle, they could be used against the officer as a weapon. Newer, slimmer cases hold up to forty-eight flex cuffs for quick, easy takedowns. Many Canadian crowd control teams now carry a “mass arrest kit” that includes the flex cuffs and a cutting tool for their release. Though the basic pouch design has improved, the disposable plastic restraints have not: they do not lock when applied, so they can slip and tighten under pressure, cutting off circulation and causing abrasions.

During any other spring, DeDauw and his fellow students might have spent their nights at parties, or sitting with friends in Parc La Fontaine griping about part-time jobs. Instead, protesting Premier Jean Charest’s plan to raise Quebec’s historically low post-secondary tuition fees by 82 percent in seven years became full-time work, busier than school. A typical strike day for DeDauw went like this: wake up at dawn for early-morning protest actions; attend general assemblies or strike renewal meetings; talk with students on campus to mobilize support; work a few hours at a part-time job. Then, in the evening, he and thousands of others would gather at Place Émilie-Gamelin (the movement’s de facto meeting spot) for the night demo. The threat of tear gas and police batons was never far off.

Quebec has a long, storied history of successful student strikes, dating back to the ’60s, when higher education rates among francophones were abysmal. In 1964, the Jean Lesage government established the Department of Education, thus ensuring a legacy of accessible post-secondary schooling. Since then, students in the province have gone on strike a couple of times each decade, first to call for affordable education and increased funding of loans and bursaries, and later to protest the government’s attempts to reverse those early gains. More often than not, the strikes served their purpose.

The current strike, though, is the longest and largest in Canadian history. Thousands of Quebec students like DeDauw have been protesting since mid-February. On March 22, more than 300,000 university and CéGEP students boycotted the classroom; on May 25, 400,000 to 500,000 people thronged in protest of Bill 78, which aimed to stamp out large demonstrations. Participation in the night marches rises and falls, depending on the movement’s level of anger, frustration, and drive: when they started in April, they routinely drew crowds of more than 20,000; a few weeks later, when provincial education minister Line Beauchamp resigned and rumours began circulating that Charest planned to introduce Bill 78, tens of thousands poured into Place Émilie-Gamelin once again.

The planned tuition hike serves as a major step toward Charest’s long-term goal of bringing tuition fees in Quebec (now about $2,519) in line with the national average, but students say the plan flies in the face of Lesage’s legacy promise. “We know how this ends,” says Alexandre Beaudry, a political science student at the Université du Québec à Montréal who has been on strike since February 14. He points to Ontario’s trajectory under the Harris Conservatives as a cautionary tale: “In the ’90s, Ontario’s tuition fees were pretty similar to ours; now they’re at $6,000 a year.”

One can attribute the longevity of the printemps érable to two factors: Charest’s own tactical errors—his refusal to negotiate for months, the introduction of Bill 78—and the students’ deep belief in the inherent value of an educated public, even if many remain all too aware that a degree will not guarantee a job. “It doesn’t make any sense to indebt people before they get out and work,” Beaudry says. “They keep telling us [education] has a price,” he continues. “Yes, but the health care system has a price, too.”

A few nights after I walked the streets with DeDauw, I meet up with Beaudry and his friends Laurence Guénette and Vanessa Girouard at L’escalier, an UQAM hangout across from Place Émilie-Gamelin. Girouard, a soft-spoken international relations and law student, sits down with a sigh, resting her head heavily on her hands. “I’m not tired dans mon coeur, but I’m tired in”—she searches for the word in English—”my morale, you know? We’re always waiting to go back to school. I can’t work, because I’m waiting to see if my summer classes will start. I try to go out to demos as often as I can.”

“Being on strike sounds depressing,” Beaudry deadpans, and everyone laughs.

But Guénette agrees with Girouard: it can be difficult to keep going, “week after week, when all the scenarios are not turning out as you had hoped.” And yet here the students are, still in the streets, navigating the police lines, pressing on with their nightly ritual. “Shout! Louder! So that no one can ignore us!” they chant.

We head toward the park, where hundreds have already gathered, waiting for the night’s march to begin. Soon we start to walk, quickly, and Beaudry, Girouard, and Guénette all run into friends. The police presence is muted tonight, the mood festive. As we walk through the residential streets east of the gay village, people hang out of their windows, waving scraps of red fabric, tablecloths, and clothing in encouragement, and the crowd surges forward.