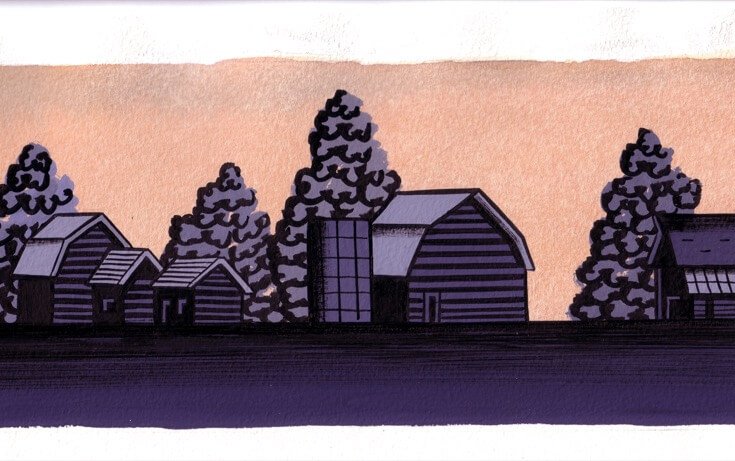 In later years, he’d recall a lurid halo in the sky as the setting sun suffused the clouds and looming trees with lavender. His dog barked briefly to announce a car. It was low slung, two toned, and it bore an unfamiliar licence plate that he later saw belonged to Manitoba. His mother went to the yard cautiously until she saw the driver, who was a stranger to the boy but not to her.

The boy was curious. Visitors were rare but he felt uneasy when it became apparent that the stranger had been working with his father in a far-off mining town.

“I brought some of his things,” the stranger said. “Mostly working gear. It’s in the trunk of the car.”

And when the trunk swung upward, he saw his father’s kit bag there.

It seemed his father always went away at night, after Tom had gone to bed. But on the day before he went away for the last time, the boy found him in the barn, quietly shoving clothing into a canvas duffel bag. There was heavy woollen underwear and socks, flannel shirts. There was a wide, greasy belt with buckles and a small strap that his father told him held the battery that powered his lamp.

It was always dark where he worked, and cold and damp as winter.

“It’s always bitter cold down under the ground. Even in the summer.”

“Exactly like the well. Deep and wet. It’s called a shaft, and that’s where I’ll be working.”

“Will you come home at night? ”

“Oh yes. That’s why I wear these rubber pants.”

And he was folding bulky black trousers of a rubberlike material with thick, twisted suspenders attached to metal buttons. He then shoved in two heavy boots, their toes worn down, exposing shiny metal. “My muckin’ boots,” he said.

“Careful how you say that.” And they laughed together briefly.

They laughed again before the silence.

Then he was rolling a cigarette. His fingers were huge and stained, but they handled the flimsy paper and tobacco shreds with dainty grace. “The reason I can go,” he said to the cigarette, “is that I’ve got a good man here to watch the place, a fella I can trust to take care of things till I come back. An able man, he is.”

Then he was squinting through the smoke as he continued stuffing the bulging kit bag.

“You know what that means, then? ”

“Good then. Everything will be alright.”

And finally he stood and reached into the darkness above them and brought down a brown, oddly shaped hard hat that was stained and scratched and battered and carried odours of sweat and grease and smoke. He rapped it with his fist, his wedding ring causing a sharp, hollow sound.

“This’ll protect the old noggin,” he said. “And this thing here, it’s called the lamp bracket. That’s where I hang the lamp so I can see down in the bottom of that well.”

And he sat for a while turning the hard hat in his hands, the cigarette smoke causing an odd contortion in his face. Finally he jammed the hat into the packed canvas bag and when he pulled the drawstring tight it formed a dome on top.

“Money,” he said finally. “A fella needs money now and then.”

“Why do you have to go away for money? ”

He seemed perplexed, removed the cigarette from his mouth, plucked a tiny shred of the tobacco from a lip.

Tom saw the canvas kit bag on the doorstep that night before he went to bed. And as he awaited sleep, he tried to pretend that it wasn’t there. His room was very dark and he could see moving shadows on the wall. He knew that they were caused by moonlight filtered through the trees, and that the motion was from a gentle breeze that whispered at the corners of the house. But they reminded him of ghosts. In the kitchen, just below his bedroom, he heard the voices of his parents. He heard his mother’s laugh and it was comforting.

And in the morning, the canvas bag was gone.

The stranger hoisted the heavy bag from the trunk of the Manitoba car and set it on the ground.

“You’ll have time for tea,” the boy’s mother said.

“Well sure,” the man said. “Or maybe something more appropriate.”

She sighed. “No. Poor Tommy. It’s been awful quiet here, ever since.”

The boy could hear a zipping sound. He saw the stranger working at a pocket on his suitcase. He then produced a bottle.

Remembering the kit bag, he turned to the boy’s mother and asked, “Where do you want this? ”

“Tom,” she said to the boy. “You take that to the barn. You’ll remember where he used to keep it.”

And with the stranger at her side, she turned and walked toward the house.