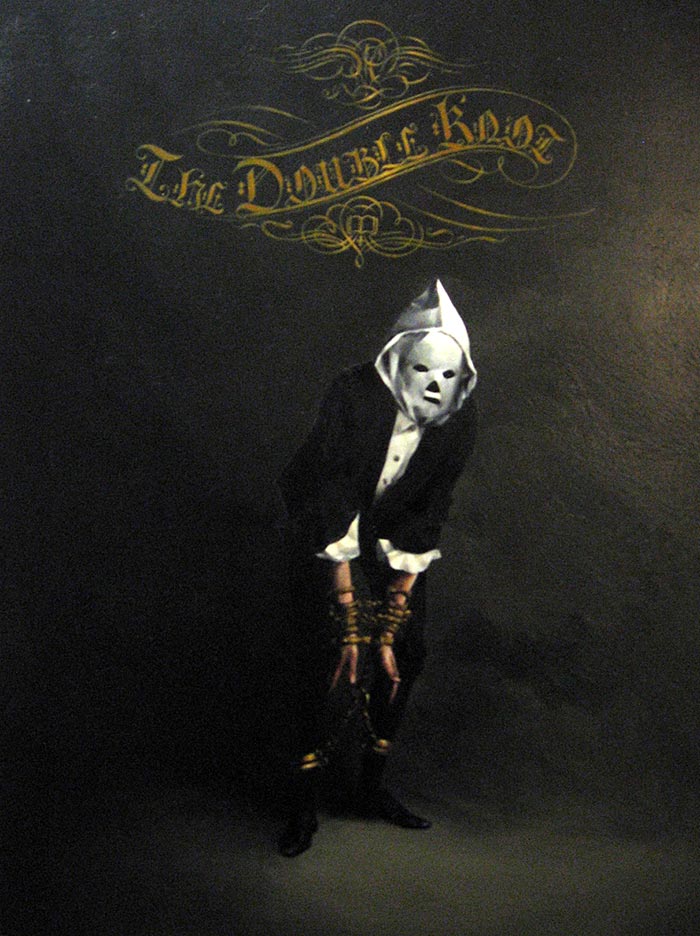 I’m in a bag. I’m in a straitjacket in a bag. It’s a sky-blue laundry bag that Angie my ex-wife made me, and there are two, maybe three hundred people standing around watching me try to get out of it. I’m pretty sure the little shit I picked for a volunteer tied a double knot in the drawstring, his idea of a joke, so I’m stuck, I’m rolling around on the pavement and I’ve got one minute precisely to get out of the straitjacket and then out of the goddamn bag or this bit will die and I’ll lose my crowd. The kid is counting down the seconds by tens. I’m miked up and I’m yelling things at the crowd, I’m making them laugh. I’ve got music playing, it’s loud, all horns, blasting from my Peavey and yeah, this is supposed to be a killer bit. But the kid has gone and tied a double knot and now I’m fucked. If it was my own kid I would sit him down after this debacle and say hey, dude, why’d you mess me up like that? Do you think that’s funny? Do you think it’s funny when you trap your dad in a bag and then stand there laughing while he loses his crowd and his income and his self-respect? Maybe Angie would be there hanging around after the show and I’d ask her hey, Ang, why when we were so good together did you have to fall for a spiritual healer?? I paid for those sessions! And that Amway crap, and I… thirty seconds!… busted my ass doing shows all over everywhere to buy you cool stuff so you’d be happy and fulfilled, and even when you needed money to open your house alarm business I had nooooo problem with that, I covered it, I did extra shows in Key West and in Vegas and Made. It. Happen! I’m out of the straitjacket, but I’m not out of the bag, I’m soaked in sweat, I’m still rolling around. I’m hissing at the kid, untie the knot, kid, untie the fucking knot! But he can’t… twenty seconds!… hear me because he’s too busy laughing his head off and the music is way too loud, and maybe if I could somehow get my Leatherman out of my back pocket I could slash my way out. That would be lame but at least I’d have made it out in a minute and the crowd might be compassionate, they might not notice, but I don’t want to destroy this bag because it’s all I have left of Angie. If she’d been into it we could have had a kid, a son or a daughter, a kid that wouldn’t have left me high and dry like this, standing next to me killing himself laughing, we would have had a kid that was kind and beautiful like his… ten seconds!… like his mother, and we would have been a real family and we would have helped each other out when we were in trouble, and okay so her spiritual healer who is really a roofer represents freedom and possibility, fine, if she wants… now I can hear the audience, they’re counting down to zero with the kid and I’ve got my Leatherman open, I’m ready to fucking destroy the very last thing I’ve been able to salvage from my marriage, my life, my… three!… two! . . .dream, and miraculously the top of the bag opens, the knot has come loose. So I calm down, I breathe, I can see a patch of sky, I emerge from the bag smoking a cigarette, serene as hell, like was there a problem here? I high-five the kid, hey, we’re all friends, good fun, the crowd goes nuts and I’m done.

Stephen Appleby-Barr is a member of the Toronto art collective Team Macho. In March 2011, he exhibited his work at the Pulse Contemporary Art Fair in New York.