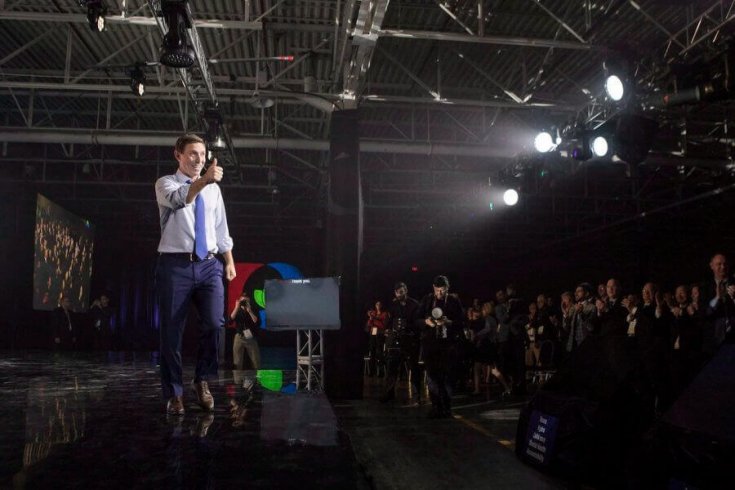 Patrick Brown, then the Ontario Progressive Conservative leader, gestures to ­supporters as he addresses the party’s convention in Toronto on November 25, 2017. Photo courtesy of the Canadian Press/Chris Young

Long before Patrick Brown gained national notoriety for resigning from his position as Ontario Progressive Conservative leader in the face of sexual-misconduct allegations—then entered the race to replace himself, then ducked out of that race a week and a half later—the thirty-nine-year-old bachelor’s personal life had been the subject of rumours in political circles. The rumours didn’t point to anything illegal; rather, Brown had a reputation for womanizing, for carrying on with interns and staffers—that sort of thing. The kinds of rumours that in a pre–#MeToo era might raise an eyebrow but not bring down an axe in Canadian politics.

That era came to an end January 24 when CTV reporter Glen McGregor sent Brown’s chief of staff an email detailing accusations of sexual misconduct, at least some of which were both credible and specific. Earlier that day, after a preliminary inquiry by McGregor, party staff members had combed through Brown’s private Facebook messages. On November 2, 2012, at 11:21 p.m., from Brown (then a thirty-four-year-old member of Parliament) to a young woman he had met while travelling: “Are you impressed I remembered you [sic] name?” he asked. “If your [sic] downtown tonight maybe I will bump into you. I will be out with friends at Kenz, Queens, and the Bank. And if you ever need to skip a line in downtown Barrie just text me.” The woman, who would go on to work in his constituency office, was eighteen years old at the time.

Brown’s staff and advisers knew he was doomed. Whether he was guilty of sexual misconduct or not, the leader could not survive the allegations. They told him so. As a teleconference later that night would make clear, Brown’s caucus had no faith the leader could win the next election.

Patrick Brown led his party thanks to a process that allowed him to win the role by, essentially, selling more memberships than his competitors, rather than earning the respect and confidence of his caucus colleagues. It’s a mechanism that has been clumsily grafted onto our political system in recent decades in an attempt to make party membership more open and accessible. But modern leadership campaigns have their dark side; while they do generate interest in a party and open up the contest to a wider array of voters, they can also ensure a leader is selected by people who have little vested interest in the party itself. They can be gamed by the talented strategist, the slick salesperson, or the outright narcissist.

Traditionally, in the Westminster parliamentary system Canada inherited from England, the leader of a party is selected—and often unselected—by caucus, the elected members of a party who sit in Parliament or provincial legislatures. The reason for this is straightforward: that system relies on the notion of confidence. A federal government, for example, must maintain the confidence of the House of Commons in order to pass budgets and legislation, and that, in turn, requires that a prime minister hold the confidence of his or her own party.

Canada began to shift away from this system a century ago. In 1917, the Liberals, then led by Wilfrid Laurier, were deeply divided about whether to support conscription for the First World War, explains John Courtney, a senior policy fellow at the University of Saskatchewan. They saw a policy convention as a novel way to invigorate a party in crisis. Conventions are exciting—more similar to the theatrics that dominated much of American politics. Laurier was influenced by O. D. Skelton—a prominent civil servant who attended party conventions in the United States and returned home an advocate of democratic reform.

After Laurier’s death, the policy convention morphed into the delegated leadership convention of 1919, attended by MPs, senators, provincial party leaders, premiers, heads of provincial party associations, and three delegates from each riding. Previously, only senators and MPs—the members of caucus—could select a leader. That convention fundamentally altered the relationship between leader and caucus. The Liberals elected William Lyon Mackenzie King, who went on to win the next election in 1921. There was unrest from time to time, Courtney says. But “King said to caucus members, ‘You didn’t choose me, I was chosen in 1919 by the party in convention. Those are the men to whom I am responsible.’” It worked—King didn’t step down until 1948. Meanwhile, says Courtney, the Conservatives, observing the success of their rivals, also introduced a delegated convention in 1927.

The temptation to bring ever more bodies into the process grew over time—three delegates from each riding became six, then twelve, for example. More recently, the delegate system has devolved even further, leading to one-member-one-vote races that open leadership elections to anyone willing to chip in a small fee for a party card. “The whole idea came in for one person one vote, [which] began in the late ’80s and early ’90s,” Courtney says, “with the populist reform notions that the power resides with the people, not with the party, not with the party elites or the executives, not with the caucus.”

One-member-one-vote leadership races are won by a process of “rack ’em, stack ’em, pack ’em,” says Goldy Hyder, ceo of public-relations firm Hill+Knowlton Strategies Canada, who spent some time with Brown the night of his resignation. “Does that necessarily lead to the best-qualified person winning?” he says. “No, it leads to the best organizer winning.” In order to become leader, Brown had simply out-organized everyone else: before his 2015 win, Brown’s team claimed that the PCs languished, with only 12,000 members; afterwards, he would claim the party had closer to 200,000. (After his resignation, party officials started disputing that figure but agreed it was likely more than 100,000.) In signing up thousands of new party members to back his leadership bid, Hyder says, “Patrick beat the establishment.”

Tensions would persist, however. In a conference call held by the PC caucus the night the allegations against Brown broke in the news (the call was secretly recorded and provided by a confidential source), the caucus came to the conclusion that the leader must step down while also acknowledging that the party’s constitution had no mechanism by which they could force him to do so. “If we call for his resignation unanimously, it doesn’t matter what is in the constitution,” member of provincial parliament Ted Arnott said on the call. “He will have to resign.” In fact, this was not clear.

In 2013, Conservative MP Michael Chong began an arduous legislative journey to rejig the imbalance of power between leader and caucus. A watered-down version of his bill passed the House of Commons in 2015 as the Reform Act. Chong notes that many of the rules that govern parliamentary life, such as the process by which party leaders are chosen, are derived from tradition and precedent rather than codified in law. “That unwritten system worked in the gentlemanly, clubby world of the nineteenth century,” he says. “But it doesn’t work today in a modern democracy.”

Some parties have taken the logic of one member one vote to a further extreme, denuding the idea of a party “member” altogether. Ahead of the appointment of Justin Trudeau, for example, the federal Liberal Party created a new “supporter” class of party membership—available free of charge—which has largely reduced party membership to a data-mining operation, gathering potential donor names to be used for subsequent fundraising drives. Anyone could vote for Trudeau to be Liberal leader in 2013. Meanwhile, lifelong Liberals are now more disempowered when it comes to questions of process and policy. Real decision-making power is centralized in the party elite and the Prime Minister’s Office. “What happens when it’s a government party?” Chong asks. “What happens if it’s the ministerial party in the House of Commons and we’re talking about changing the head of government, here?”

Patrick Brown is not the first leader to have been brought down of late. In the spring, seven of the ten Bloc Québécois MPs abandoned leader Martine Ouellet over concerns about her leadership style. In 2014, caucus forced the resignation of Alberta premier Alison Redford, who was facing allegations of entitlement and misuse of public funds. Canadian politics seem to be increasingly driven by civil wars, imploding parties, and kneecapped leaders; dramatic and chaotic caucus revolts can drag out for weeks or months. As leadership races themselves have opened, the line of accountability of the leader to caucus has grown weaker.

There are a few options for reform: return to a caucus-selected leader, amend party constitutions to clarify the powers of elected members, or complete what Chong set out to do with the Reform Act and codify the unwritten rules of parliaments and legislatures. Unless one of these alternatives is implemented, opaque, closed-club parties will remain the gatekeepers to the entire political system. The problem, as the debate over the Reform Act demonstrated, is that power rarely likes to check itself. Parties tend to resist reforms that limit their membership, or base, or that force power to be decentralized rather than kept in the leader’s office.

When Brown stepped down as Ontario PC leader, the party’s caucus selected MPP Vic Fedeli to be interim leader. Shortly after taking over, Fedeli said he would “root out the rot” that had settled into the party under Brown; with the support of caucus, he promised to lead the party through the upcoming election in June. His appointment was quickly undermined: the party membership decided to hold a leadership race before the provincial campaign. The opinion of the caucus that just ousted its last leader was irrelevant. The leadership race that followed was one of the most chaotic in Canadian history. The winner was announced March 10; it was Doug Ford.

This article appears in the May 2018 issue of The Walrus, under the headline
“Crashing the Party”