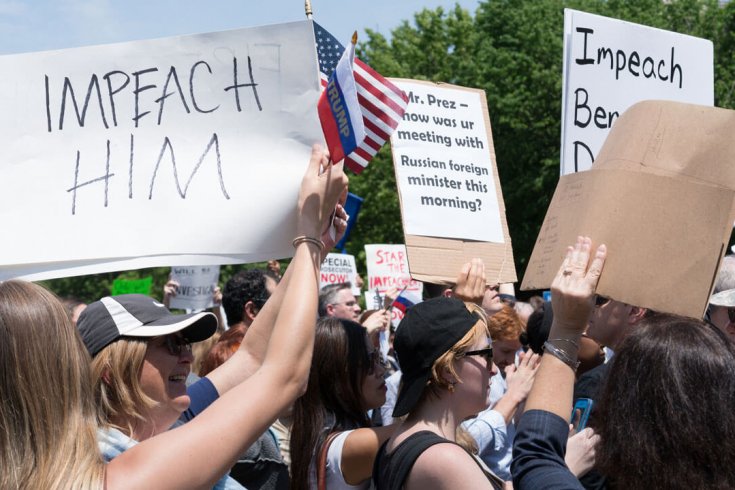 People used to say that a week was a long time in politics, but that’s ancient history now. A morning sometimes is enough to change everything. As former FBI director James Comey testified in front of the US Senate, answering pointed questions with short but detailed factual statements, a ray of light pierced through the gloom that has descended on global politics in the aftermath of Brexit and the election of Trump. Despite Comey’s succinctness, what emerged, surreptitiously, almost accidentally, was a broad and incisive analysis of our global political situation. His view is simple but revelatory: America and the world are in a struggle between the forces of law and the forces of lawlessness.

Comey refused, at least in the open session, to state that Donald Trump was guilty of obstruction of justice. On the other hand, there is no other reasonable interpretation of the story he did tell. The President of the United States demanded loyalty from the director of the FBI. “The statue of justice has a blindfold on,” Comey stated. “You’re not supposed to be peeking out to see if your patron is pleased with what you’re doing.” The facts are on the table: The President sought to obstruct the functions of the Federal Bureau of Investigation, and when the director refused to assure him of personal loyalty, fired him. The only question that remains is political, not legal: Will the Republican Party act on what it knows? Will law triumph over factionalism?

This is not merely a question of American domestic politics. It affects every country on earth. Comey clarified again, in the strongest possible terms, the influence of Russia on the last American election. “They’re coming after America,” he said. “And they will be back.” But it’s not just America that is under threat. They tried to come for France. They are coming for Germany right now. They may try to come for Canada in the future.

Comey did not attempt to connect the two incidents—the President of the United States actively obstructing an investigation, and Russian meddling in US elections. But it is clear that they are connected, and so American domestic politics and geopolitics are essentially the same at this moment. Putin, Trump, and their ilk have shown little respect for the institutions of law at home and the rules-based international order generally. They desire a world where they are unbound by existing contracts. The new global division has revealed itself: It is not communism against capitalism, or a clash of civilizations. It is the gangsters against those who believe in the law.

Now that the enemy has been identified, it is obvious on which side Canada will stand and who we will have to stand against. If there is one trait that has defined us, it is obedience to the rules. It’s always been easy to make fun of: Dudley Do-Right, the Mountie who always get his man; or the old joke, “How do you get ten Canadians out of a swimming pool?” “Say, ‘Hey guys, can you get out of the pool?’” But it is also a notable feature of our politics. The motto reads “Peace, Order and Good Government,” but order is the true heart of the Canadian promise.

Foreign Affairs Minister Chrystia Freeland delivered a speech earlier this week that articulated a vision of a more muscular, forceful Canada. Though it came a day before the Comey hearing, it was in many ways a response to the truth about the new world disorder that Comey revealed. The old orders have passed and, while Canada will need to assert itself in a way that is unfamiliar to us, our response will be rooted in our well-established love of rules. “Whatever their politics, Canadians understand that, as a middle power living next to the world’s only superpower, Canada has a huge interest in an international order based on rules,” Freeland said. “One in which might is not always right. One in which more powerful countries are constrained in their treatment of smaller ones by standards that are internationally respected, enforced and upheld.” She is right. It is clear what side we’re on, and not just out of principle but out of self-interest.

Marshall McLuhan once declared, “World War III is a guerilla information war with no division between military and civilian participation.” We are in that war now, and the spoils are the rule of law.